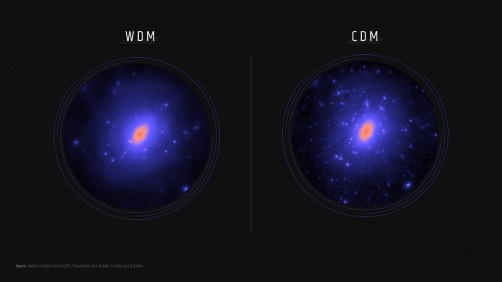 Newswise — Today, scientists in the Dark Energy Survey released results that have been five years in the making. Researchers used the world's most complete census of dwarf galaxies around our Milky Way galaxy to probe the nature of dark matter, an invisible form of matter that dominates the universe. These new measurements provide information about what dark matter can and cannot be made of.

In particular, the new results constrain the minimum mass of the dark matter particles, as well as the strength of interactions between dark matter and normal matter.

According to these new results, a dark matter particle must be heavier than a zeptoelectronvolt, which is 10-21 electronvolts. That’s one trillionth of a trillionth of the mass of an electron. This study also shows that dark matter's interactions with normal matter must be roughly 1,000 times weaker than the weak nuclear force. Of the known forces, only gravity is weaker.

These novel measurements used data from the Dark Energy Survey, a cosmological survey designed to study dark energy, the mysterious force driving the accelerated expansion of the universe. In contrast, dark matter is gravitationally attractive, resisting the expansion of the universe and gravitationally binding astronomical systems such as galaxies. The smallest "dwarf" galaxies can have hundreds to thousands of times more dark matter than normal matter. Over the past five years, the Dark Energy Survey has combined with other surveys to more than double the known population of these tiny galaxies. The current total is now over 50.

"The Dark Energy Survey analysis has added a stringent new test to the standard cosmological paradigm and places tight constraints on several alternative dark matter models," said Dark Energy Survey spokesperson Rich Kron, a scientist at the University of Chicago and Fermilab. "This is a fantastic example of how cosmological observations of the very large can inform particle physics experiments studying the very small."

Dark matter makes up 85% of the matter in the universe, but we have yet to detect it directly in the laboratory. The gravitational effects of dark matter are indirectly but clearly visible in the motions of stars in galaxies, the clumpy distribution of galaxies in the universe, and even in the amount of lightweight elements. The robust astronomical evidence for the existence of dark matter has motivated many experimental searches here on Earth, using instruments ranging from cryogenic detectors buried deep underground to energetic particle colliders.

"The faintest galaxies are among the most valuable tools we have to learn about dark matter because they are sensitive to several of its fundamental properties all at once," said Ethan Nadler, the study’s lead author and graduate student at Stanford University and SLAC.

By combining the observed census of dwarf galaxies with advanced cosmological simulations of the distribution of dark matter around the Milky Way, scientists were able to predict how the physical properties of dark matter would affect the number of small galaxies. Small galaxies form in regions where the dark matter density in the early universe is very slightly above average. Physical processes that smooth out these regions of higher density (if dark matter moves too quickly or gains energy due to interactions with normal matter) or prevent density variations from collapsing to form galaxies (thanks to quantum interference effects) would reduce the number of galaxies observed by the Dark Energy Survey.

"It's exciting to see the dark matter problem attacked from so many different experimental angles," said Fermilab and University of Chicago scientist Alex Drlica-Wagner, Dark Energy Survey collaborator and one of the lead authors on the paper. "This is a milestone measurement for DES, and I'm very hopeful that future cosmological surveys will help us get to the bottom of what dark matter is."

The Dark Energy Survey is a collaboration of more than 300 scientists from 25 institutions in six countries. For more information about the survey, please visit the experiment's website.

Funding for the DES Projects has been provided by the U.S. Department of Energy, the U.S. National Science Foundation, the Ministry of Science and Education of Spain, the Science and Technology Facilities Council of the United Kingdom, the Higher Education Funding Council for England, the National Center for Supercomputing Applications at the University of Illinois at Urbana-Champaign, the Kavli Institute of Cosmological Physics at the University of Chicago, Funding Authority for Funding and Projects in Brazil, Carlos Chagas Filho Foundation for Research Support of the State of Rio de Janeiro, Brazilian National Council for Scientific and Technological Development and the Ministry of Science and Technology, the German Research Foundation and the collaborating institutions in the Dark Energy Survey.