Data Centers Continue to Proliferate While Their Energy Use Plateaus 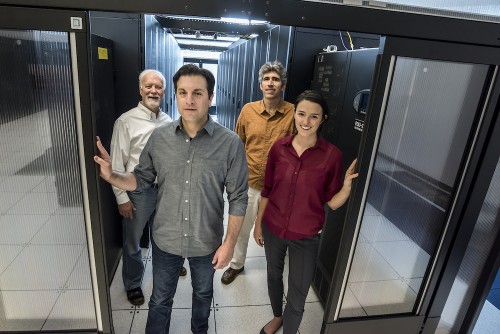 Newswise — As the number of data centers continues to increase in the United States, the good news is that they are becoming much more energy efficient. A new report from the Department of Energy’s Lawrence Berkeley National Laboratory (Berkeley Lab) has found that electricity consumption by data centers nationwide, after rising rapidly for more than a decade, started to plateau in 2010 and has remained steady since, at just under 2 percent of total U.S. electricity consumption.

Furthermore electricity consumption is projected to maintain a low growth rate through 2020 while the total server installed base is projected to increase by 40 percent from 2010 to 2020, according to the new Berkeley Lab report titled, “United States Data Center Energy Usage Report,” the first comprehensive energy analysis of data centers in nearly 10 years.

“Over that decade, the amount of energy savings is about 620 billion kilowatt-hours, or more than $60 billion, thanks to efficient practices,” said Berkeley Lab researcher Arman Shehabi, one of the lead authors of the report.

The last such comprehensive analysis was done in 2008, a report to Congress that was also by Berkeley Lab. It found that electricity use by data centers was doubling every five years, due largely to explosive growth in both the number and density of data centers. “The idea that electricity use is doubling every five years is still commonly believed to this day,” Shehabi said. “In fact there have been tremendous strides in efficiency. But there are still tremendous opportunities in the near term.”

The Berkeley Lab authors of the new report, including Dale Sartor, Sarah Smith, Richard Brown, and Magnus Herrlin, several of whom also worked on the 2008 report, collected data on shipments of servers and storage, networking, and other equipment and then built a model to project data center energy consumption. They included data centers that ranged in size from a closet with fewer than five servers to “hyperscale” computing facilities with tens of thousands of servers in hangar-sized buildings, such as those operated by companies like Google and Amazon.

Overall, they found that the larger data centers have made significant advances in operating more efficiently. At the same time, smaller data centers, which are not increasing in number but still projected to account for 60 percent of all data center energy use in 2020, are still often inefficient. “The industry growth is primarily in hyperscale data centers, but there’s opportunity in the typical corporate or institutional data center,” Sartor said. “There are millions of them in closets or small rooms, and they’re not very efficient.”

The study estimated that data centers in the U.S. consumed a total of 70 billion kWh in 2014, accounting for about 1.8 percent of total U.S. electricity consumption. From 2010 to 2014, consumption increased by about 4 percent, and from 2014 to 2020 it is projected to increase another 4 percent. This is in contrast to a 90-percent increase from 2000 to 2005 and 24-percent increase from 2005 to 2010. (Server shipments slowed conspicuously in 2009, likely due in large part to the economic recession, the authors noted.)

The researchers found three main reasons for the improvements in energy efficiency. One factor was that cooling and powering strategies have gotten better. “In the past, most data centers blasted air conditioning indiscriminately to keep equipment from getting overheated—this is grossly inefficient,” Shehabi said. “Now there are more advanced cooling strategies, such as hot aisle isolation, economizers, and liquid cooling, which all make the cooling process far less energy intensive.”

A second reason is something called scaling, or “power proportionality.” Smith explained: “Most servers are sitting idle most of the time, but traditionally they were not designed to scale back their electricity draw when they’re doing less processing. That’s been improving.”

With better power management software as well as better hardware, servers can scale back on their power consumption when they’re idle or not being fully utilized.

Another way to address this problem is to reduce the amount of time that servers are sitting idle by reducing the total number of servers. “Industry has been consolidating servers, so that rather than having five servers running at about 10 percent, they may have one running closer to 50 percent,” Smith said.

This sharing of resources, or “virtualization,” is an industry trend that has fueled the surge of cloud services, and is the third area of improvement. “The cloud is certainly one of the drivers to more energy efficiency,” Sartor said. “Data centers used to be considered a fixed cost, but in a cloud environment, whoever is lowest cost provider is going to win. Energy is one of the easier things to optimize.”

Given these trends, the researchers projected three future scenarios in which even more energy savings could be achieved. In the “improved management scenario” inactive servers are removed and other low-capital operational and technological improvements are made. This yielded a further 10 percent savings in 2020 relative to a “current trends” scenario.

In the “hyperscale shift” scenario, 80 percent of servers in small data centers are relocated to hyperscale facilities, which yielded energy savings of 25 percent over the “current trends” scenario. And the “best practices” scenario assumes widespread adoption of the most efficient technologies and practices for each data center type, thus achieving 40 percent savings over the “current trends” scenario.

“This is the big story—we have an opportunity to reduce energy use in U.S. data centers even further while at the same time providing an order of magnitude more computational output,” said Sartor.