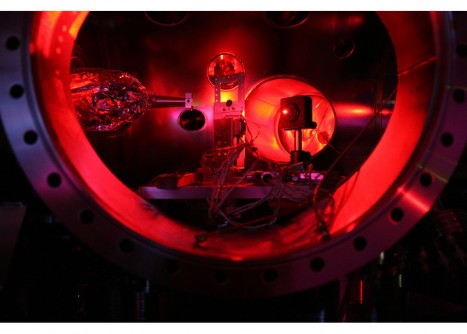 The interior of a Linac Coherent Light Source experimental chamber set up for an investigation that created and measured a form of extreme, 3.6-million-degree Fahrenheit matter known as "hot, dense matter." 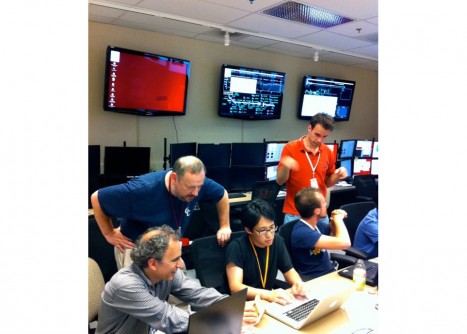 Eight scientists have shared the 2015 John Dawson Award for Excellence in Plasma Physics Research for an experiment that used the world’s most powerful X-ray laser to create and probe 3.6-million-degree matter in a controlled way for the first time.

Newswise — The experiment marked a significant step forward in understanding extreme states of matter at the hearts of stars and planets and at the core of nuclear fusion reactions. It took place in July 2010 at the Linac Coherent Light Source (LCLS), a DOE Office of Science User Facility at SLAC National Accelerator Laboratory.

The Dawson Award honors a recent outstanding achievement in plasma physics research. The 2015 award was given to a team including SLAC’s Bob Nagler and Philip Heimann and led by researchers at Oxford University. The American Physical Society cited their “creative and novel use of the hard X-ray free-electron laser” to create high-density plasmas and accurately measure their properties, as well as their development of “new theory that addresses discrepancies with long-standing models and provides stimulus for continued developments."

From Aluminum Foil to Extreme Matter

In the experiment, scientists used LCLS’s rapid-fire laser pulses, which are a billion times brighter than X-rays available before, to flash-heat a tiny piece of aluminum foil in less than a trillionth of a second. This created “hot dense matter,” a plasma that is also a solid. Plasma constitutes a fourth state of matter, alongside solid, liquid and gas, in which electrons have been torn away from their parent atoms.

The team was then able to use the LCLS X-rays to take the temperature of the hot dense matter. It was 2 million degrees Kelvin, or 3.6 million degrees Fahrenheit. In half a dozen follow-on experiments, most recently in April 2015, they have continued to make inroads into understanding the properties of these extreme states that had long been out of reach.

“Creating something with that density and temperature is possible at a conventional laser facility, but it’s very difficult to see how the stuff you have created behaves because optical lasers can’t penetrate into the dense matter. To know in detail what you have created, you need X-rays,” said Nagler, who is an LCLS instrument scientist.

“At LCLS we have these very bright X-rays, which are an excellent probe. That was the thing that caught most peoples’ attention and had a big impact.”

“We discovered that there are maybe 10 or 20 of these electron-atom collisions within the span of a single X-ray laser pulse, which lasts just 100 millionths of a billionths of a second,” said Sam Vinko, a Royal Society University Research Fellow at Oxford. “This is important because if you want to understand the evolution of one of these hot dense matter systems – or understand how X-ray laser pulses damage the samples you are studying – you need to know what these collision rates are.”

The results of these experiments have already influenced longstanding theories about how atoms behave under extreme conditions, which were based on astrophysical models that date back to the 1960s.

“Up until this point there’s been no way to challenge whether the fundamental basis of those models was anything like correct,” said LCLS Director Mike Dunne, who was not involved in the experiments. “Now LCLS gives us a new tool for measuring these conditions directly, and in many cases it has shown that the assumptions behind those models were too simplistic.” The findings may also aid the understanding of nuclear fusion – the process that fuels stars, and a potential future energy source for human society.

Justin Wark, director of the Oxford Center for High Energy Density Science and leader of the Oxford research group, said the award-winning research would not have been possible without key contributions from Hyun-Kyung Chung of the International Atomic Energy Agency. She worked with Richard W. Lee, now at the University of California, Berkeley, to develop computer codes that allowed the team to simulate the behavior of the hot dense matter they made so they could better understand their experimental results. “No one knew if the codes would model the system well, and they modeled it brilliantly,” Wark said.

He noted that much of the key work linking the experimental data to the simulations was undertaken by another awardee, Orlando Ciricosta, while he was still a graduate student at Oxford.

Also honored with the award was Roger Falcone of UC Berkeley, who led the group there and chaired the LCLS Science Advisory Committee during its commissioning and turn-on period.

“When LCLS turned on in 2009, a whole gamut of opportunities across a wide range of science opened up,” Wark said. “We feel enormously privileged to have been in the vanguard of those using this remarkable machine. While we have made huge inroads using LCLS in the understanding of dense plasmas, there is still so much more to learn.” 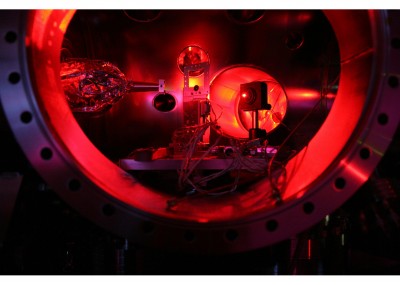 Caption: The interior of a Linac Coherent Light Source experimental chamber set up for an investigation that created and measured a form of extreme, 3.6-million-degree Fahrenheit matter known as "hot, dense matter." 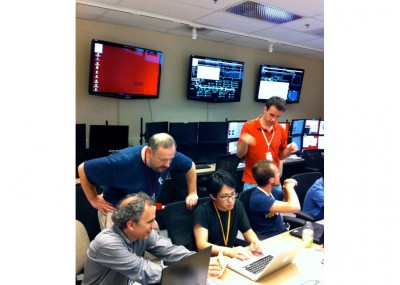