Deep Dive Into How Electrons Behave 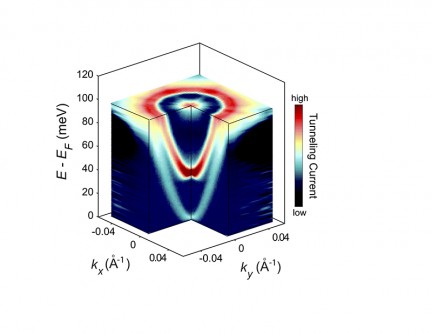 Scientists developed a spectroscopic technique that goes beyond surface characterization and allows observation of electronic states deep within a material. This technique relies on electron tunneling, where electrons that have insufficient energy to go over an energy barrier can instead “tunnel” through it. In this technique, scientists simultaneously measured both the momentum and energy of electrons in a quantum well. The figure shows three electronic states (bands) buried beneath the sample surface. The scientists could vary parameters such as the electron density in the quantum well and the applied magnetic field, producing changes in the spectra that reveal the basic physics underlying the electronic structure.

How well a material conducts electricity from a power plant to your home depends in part on how electrons behave. Until now, the conventional method for studying electron energies and momenta couldn’t “see” past the surface. A new method lets scientists observe electronic states deep inside a material. For the first time, scientists can simultaneously measure the momenta and energies of subsurface electronic states in high resolution. These electronic states determine the optical and electrical properties of the material.

Observing electronic states offers three key benefits. Scientists can use the technique to study the physics of interacting particles in previously challenging geometries. For example, a team used this approach on a technologically important structure known as a quantum well. These wells confine electron motion in only two dimensions and can be used as switches in computers. The technique is being used by scientists to identify better semiconducting materials. Further, it can be adopted to explore exotic phenomena such as the interactions underlying superconductivity.

The energy and momentum of electrons influence their motion through a material, which, in turn, determines its electrical and optical properties. Until now, angle-resolved photoemission spectroscopy (ARPES) has been the only means for direct determination of both the electron energies and momenta used to characterize the electronic states of a material. ARPES has provided critical data on systems such as semiconductors, high-temperature superconductors, and 2-D materials such as graphene. However, ARPES can only be used to study the properties of conducting materials at the surface and does not work in the presence of applied magnetic fields. Scientists at the Massachusetts Institute of Technology and Princeton University have developed a new spectroscopic technique that can be used for conducting as well as insulating materials and can be used to investigate the electronic structure below the material’s surface. The technique uses a new approach, quantum mechanical tunneling, to determine the electron’s energy and momentum spectra. In this technique, electrons that are ejected from the source layer tunnel through a barrier layer only if the electronic states have momentum and energy that coincide with those in the subsurface layer that is under study. Monitoring the tunneling current provides detailed information about the subsurface electronic states. Furthermore, spectra can now be obtained from insulating samples, and the technique can be used to study the electronic structure of materials in high magnetic fields.