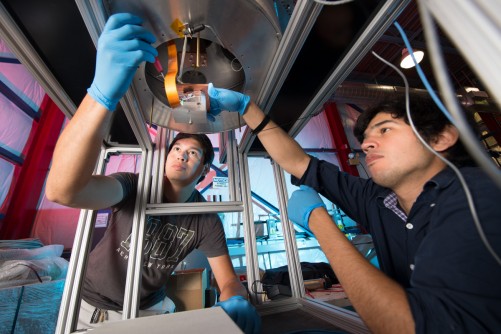 Engineers work on highly sensitive skipper CCDs. Researchers will use these sensors to search for low-mass dark matter particles.

Newswise — The U.S. Department of Energy announced that it has awarded scientists at its Fermi National Accelerator Laboratory funding to boost research on dark matter, the mysterious substance that makes up an astounding 85% of the matter in the universe.

The award will fund two Fermilab projects focused on searching for dark matter particles of low mass — less than the mass of a proton.

DOE’s Basic Research Needs for Dark Matter New Initiatives program aims to bolster the search for dark matter particles in the range from as heavy as a proton to the lightest mass consistent with the evidence, a million trillion trillion times lighter. It leverages existing and planned large-scale investments and expertise in accelerators, underground laboratories, detector R&D, novel sensing and theoretical physics.

“The mystery of the nature of dark matter is one of the most persistent in particle physics, and it’s only through smart, steady searching that we’ll get to the bottom of it,” said Josh Frieman, head of the Fermilab Particle Physics Division. “Our scientists have been on the cutting edge in the search for low-mass dark matter. The infusion of funding from this award will enable us to advance new approaches that can bring us that much closer to bringing dark matter to light.”

1. Extending the search for axions with ADMX

One theory suggests that dark matter is made of axions, very light, invisible particles streaming through the cosmos. Scientists working on the ADMX experiment have been searching for these hypothesized particles using a haloscope, an instrument that uses a magnet to convert axion dark matter particles into ordinary microwaves. By building the world’s most sensitive superconducting radio receiver, ADMX researchers hope to discover axions at frequencies between 2 and 4 gigahertz.

2. Toward unprecedented sensitivity with skipper CCDs

One way to hunt for dark matter is to catch it in the act of bumping into a particle of ordinary matter, such as an electron. A sensitive enough detector could pick up on the transfer of energy between the two. Scientists at Fermilab and partnering institutions have been using high-sensitivity devices called skipper CCDs to catch those energy-transfer signals. Under the new DOE initiative, they’re setting their sights on the even harder-to-detect, lower-energy transfers that would arise from a low-mass dark matter particle. They plan to take the skipper CCD technology to its full potential by developing the design and construction plan for a 10-kilogram experiment with skipper CCDs, building on the developments from the ongoing pathfinder experiments SENSEI and DAMIC.