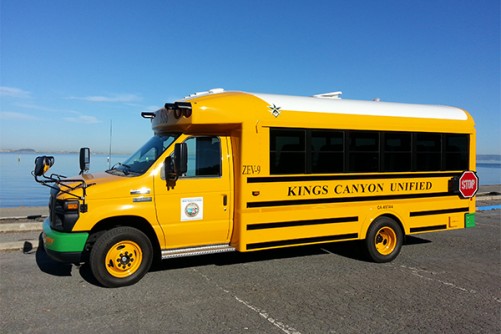 Electric school buses, such as the Trans Tech model shown here, could save school districts millions if integrated with a vehicle-to-grid system, according to new research.

Newswise — Electric school buses that feed the power grid could save school districts millions of dollars — and reduce children’s exposure to diesel fumes — based on recent research by the University of Delaware’s College of Earth, Ocean, and Environment (CEOE).

A new study examines the cost-effectiveness of electric school buses that discharge their batteries into the electrical grid when not in use and get paid for the service. The technology, called vehicle-to-grid (V2G), was pioneered at UD and is being tested with electric cars in a pilot project.

Adapting the system for school bus fleets is a logical application. School buses generally travel distances within electric vehicles’ battery range, and they are not in use for much of the day. Electric school buses also do not release sooty diesel exhaust, which contains pollutants that can cause respiratory irritation, lung cancer and heart disease.

“I see neighborhood kids waiting for and riding school buses out my window or when walking my dog,” said Jeremy Firestone, CEOE professor of marine policy and director of the Center for Carbon-free Power Integration. “Electric buses have the benefit of kids not standing around or having their windows open while diesel fumes are being released.”

For the study, researchers analyzed existing diesel school bus routes in a mid-sized suburban school district in Delaware and calculated the costs and benefits of V2G-capable electric bus replacements. Over 14 years, which is the typical lifespan of a bus, a V2G electric bus fleet could save an estimated $38 million.

“I was surprised,” said study lead author Lance Noel. “The savings go through the roof.”

The economic research took into account costs associated with fuel, electricity and batteries, as well as pollution-related health care expenses and other factors.

A diesel bus costs $110,000, compared with $260,000 for an electric bus equipped with a V2G-capable, 70-kilowatt on-board charger. Diesel buses have an average fuel economy of 6 miles per gallon, including the effects of idling, and emit soot, ozone, sulfur dioxide, nitrous oxide and other pollutants. These fumes can be disproportionately higher within the cabin of a bus compared to surrounding pollution levels.

Choosing a V2G-capable electric bus over a diesel bus would save a school district $6,070 per bus seat, or $230,000 per bus over the vehicle’s 14-year lifespan. Even with taking out the medical and climate change costs associated with diesel pollution, school districts could still save $5,700 per seat.

“They could save a large amount of money while also shifting away from the consumption of diesel and enhancing school children’s health,” the authors write in the paper.

While electric school buses can be cost-competitive without providing V2G services, the V2G technology would produce substantially larger savings for school districts.

“The V2G capability is what changes the economics of the school bus,” said study co-author Regina McCormack, who along with Noel is a graduate student in CEOE’s School of Marine Science and Policy.

The study, titled “A Cost Benefit Analysis of a V2G-Capable Electric School Bus compared to a Traditional Diesel School Bus,” appears in the Aug. 1 issue of Applied Energy.