Dissecting the Ecology of Microalgae and Bacteria Across Time and Space

A new cultivation technology called a “porous microplate” reveals how photosynthetic microalgae interact with their micro-environment. 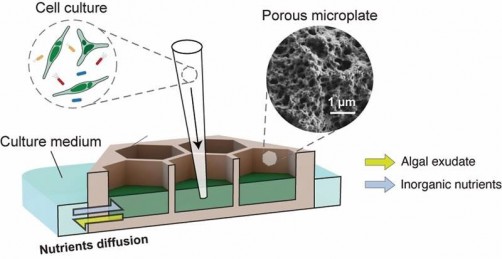 A schematic diagram of the porous microplate between culture wells. This allows microalgae and bacteria to be cultured in wells at different distances from one another and exchange nutrients without being in physical contact.

Newswise — Microalgae are algae too small to see with the human eye that live in both fresh and sea water. They are responsible for half of fixation of carbon that occurs on Earth through photosynthesis. Fixation is the process where carbon dioxide moves from the atmosphere into solid organic forms. This makes microalgae important in controlling climate change. Microalgae also have the potential to be a sustainable bioenergy source. The water immediately outside their cells, called the “phycosphere,” is rich with organic carbon that is secreted by the algae. The phycosphere is an ideal ecosystem for the growth of bacteria. However, detecting and measuring bacterial cell activity and population growth in the phycosphere is difficult. This is because scientists have not been able to track single bacteria and their locations in relation to algal cells over the course of an algal population growth cycle.

This research sought new ways to study how the phycosphere structures bacterial communities across time and space. The researchers created a new co-culture method called a “porous microplate.” The microplate is made of a material with nanoscale pores, smaller than the microalgae and bacteria. Microplates sit in the walls between culture wells, which are tiny pools where microalgae and bacteria grow in a lab. The tiny pores mean the microplates can pass nutrients and molecules associated with metabolism between culture cells while blocking physical contact between algae in adjacent wells. This design enabled the researchers to stretch out the phycosphere in both space and time. As a result, they could quantify how bacteria grow and how the bacterial community changes at different distances from the algal cells. The new method will help microbiologists and other researchers understand microalgae and ultimately their role in our planet’s climate.

After sequencing the DNA of algal microbiome cultured in the microplate, the team revealed that certain bacteria responded to the algal production of organic carbon in a spatially dependent manner. Specifically, they found that bacteria associated with the algae reached higher abundances when placed closer to the algal culture well. This result fits with expectations for real phycosphere environments. The researchers also unexpectedly found that cultivation of the diatom Phaeodactylum in the microplate led to yields 20 times greater than batch cultures due to continuous supplementation of nutrients.

The new porous microplate incubation method is highly effective for algal cultivation, allowing the diatom Phaeodactylum to accumulate to its theoretical physical limit, densely packed with cell-to-cell distances equal to their cell radius. This result may be important to efforts to produce increased and more efficient algal biomass production at large scales. Moreover, the porous microplate system facilitates investigation of community-level microbial interactions in complex small-scale ecosystems mediated by metabolite exchange. The system shows that the algal phycosphere is a complex ecosystem which allows multiple microbial groups to thrive in different locations within this microscale environment.

The work was supported by the Department of Energy Office of Science’s Genome Sciences Program as part of the µBiospheres Scientific Focus Area research program. Additional support was provided by the Kwanjeong Educational Foundation.