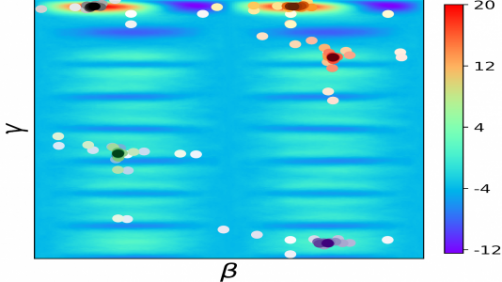 A multimodal landscape arising in the quantum approximation optimization algorithm. Dots show points evaluated by a multistart optimizer, which is better suited for finding good optima for this problem than classical methods. Developing specialized methods for such problems will be a part of FAR-QC.

Newswise — The U.S. Department of Energy’s (DOE) Argonne National Laboratory was recently awarded a total of $4.15 million for research in quantum computing and networking as part of the 2019 Advanced Scientific Computing Research (ASCR) Quantum Computing and Quantum Network Awards. The awards will fund three multi-year projects in an effort to secure the nation’s leadership in the field of quantum information science.

Scientists from Argonne’s Mathematics and Computer Science (MCS) division and Computing, Environment and Life Sciences (CELS) directorate will participate in two of the projects in ASCR’s Accelerated Research in Quantum Computing (ARQC) category. One of the projects, titled “Fundamental Algorithmic Research for Quantum Computing (FAR-QC),” is a multi-disciplinary collaboration between the national laboratories, academia and industry that aims to better understand the significance of the potential impact of quantum computing.

“We are on the threshold of a new era in quantum information science and quantum computing and networking, with potentially great promise for science and society. These projects will help ensure U.S. leadership in these important new areas of science and technology.” — Paul Dabbar, Under Secretary for Science

"Using quantum systems for computing is a promising thought,” said computational mathematician Jeffrey Larson of Argonne’s MCS division, who is a leader on the project. “To prove these systems can surpass the capabilities of classical computers for certain DOE-relevant problems requires researchers from diverse scientific backgrounds, including Argonne's optimization expertise."

The FAR-QC team of physicists, applied mathematicians, quantum information scientists and computer scientists will develop quantum, classical and hybrid algorithms to advance quantum computing capabilities in quantum simulation, optimization and machine learning. These algorithms will serve as a template for future quantum technologies. In addition, the scientists will analyze the performance of quantum simulated systems to characterize the advantages that quantum algorithms could ultimately realize.

Altogether, the five-year project will receive $19.5 million, with $1.3 million going to Argonne specifically.

Scientists from Argonne’s CELS directorate will also receive funding from the ARQC category for a project titled “Advancing Integrated Development Environments for Quantum Computing through Fundamental Research (AIDE-QC).” The team, consisting of five DOE laboratories and the University of Chicago, will develop open-source computing, programming and simulation environments that support the diversity of quantum computing research at DOE.

“We are entering an era of quantum computing where the available devices are noisy intermediate-scale quantum (NISQ) devices,” said Stefan Wild, MCS deputy division director and a scientist on the project. “The devices will be able to perform tasks that classical computers can’t, but they won’t be capable of full-fledged, unhindered quantum computing. We need to develop techniques to handle this critical, transitional time of scientific exploration.”

Argonne will use the expertise of its scientists to address critical aspects of computer science research that accelerate the integration of NISQ devices, including high-level programming languages, novel error-mitigation techniques for near- and mid-term hardware devices, leading-edge platform-agnostic compilers and tools for validation, verification and debugging.

Classical information comes in the form of bits, and quantum information comes in qubits, which computers handle in significantly different ways. "The increasing number of qubits on emerging computer chips presents an exciting opportunity to develop scalable quantum circuit compilation techniques and to test them on cutting-edge hardware," said Argonne’s computer scientist Martin Suchara, a member of the AIDE-QC team who specializes in quantum computing.

AIDE-QC will receive over $18.6 million; around $2.4 million of that will go to Argonne. The laboratory’s participation in both AIDE-QC and FAR-QC is sure to enhance collaboration across the newly established projects.

Finally, scientists from Argonne’s CELS directorate will participate in a project, titled “Illinois-Express Quantum Network (IEQNET),” funded by the DOE ASCR Transparent Optical Quantum Networks for Distributed Science program. The project team, led by scientists at DOE’s Fermilab, plans to develop and demonstrate a metropolitan-scale, quantum-classical hybrid network with nodes at Argonne, Fermilab, and Northwestern University and in downtown Chicago.

“We want to utilize existing links because we have significant infrastructure that has already been laid for classical communication,” said Rajkumar Kettimuthu, an Argonne scientist on the study. “The challenge will be to achieve classical and quantum coexistence in the same fibers.”

The program funds five projects — involving national laboratories, universities and industry —  that will develop complementary technology over the next four years. The total grant is for $3.2 million, and Argonne will receive $400,000. The applications of large-scale quantum networks include better detection of earthquakes and gravitational waves, as well as better synchronization of atomic clocks and arrays of research devices for many scientific fields.

“We are on the threshold of a new era in quantum information science and quantum computing and networking, with potentially great promise for science and society,” said Under Secretary for Science Paul Dabbar in a news release announcing the funding awards. “These projects will help ensure U.S. leadership in these important new areas of science and technology.”