New element 117 and its decay products establish the existence of long-sought Island of Stability. 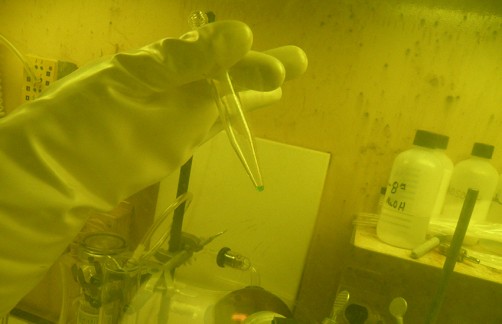 The green dot at the bottom of the glass vial is a solution containing 22 milligrams of ultra-pure 249Bk produced at ORNL’s High Flux Isotope Reactor and Radiochemical Engineering Development Center at ORNL.

Two isotopes of a new element with atomic number Z=117 were created by an international collaboration in the reaction between unique radioactive 249Bk target material produced at Oak Ridge National Laboratory (ORNL) through the DOE Isotope Program and an intense beam of 48Ca ions at the Joint Institute for Nuclear Research (Dubna, Russia). This result completed the 7th row of the Periodic Table of Elements and demonstrated the existence of long-sought Island of Stability for superheavy nuclei, originally proposed by Glenn Seaborg in the 1960s.

249Bk target material was provided by the DOE Isotope Program and enabled the experiments which discovered element 117 and subsequent experiments which confirmed its existence, as well as searches for other superheavy elements. The longstanding question of the existence of the Island of Stability for superheavy elements has been answered with the discovery of new nuclei stabilized against radioactive decay. The enhanced stability is a result of quantum effects and related shell structure in these nuclei. It opens up the world of nuclei and atoms to further expansion toward even heavier elements and their structure. Longer half-lives of the isotopes observed in decay chains of these new elements create for the first time an opportunity to measure nuclear masses and to determine chemical properties of superheavy elements, allowing the expansion of knowledge of the behavior of atomic and nuclear matter in new ways. The discovery of element 117 was officially recognized by the Division of Inorganic Chemistry of the International Union of Pure and Applied Chemistry in December 2015.

New elements and nuclei establishing the existence of the Island of Stability and expanding the Periodic Table of Elements were produced in hot fusion reactions using targets of unique radioactive actinide materials from ORNL including short-lived 249Bk and projectiles of 48Ca of unprecedented intensity at Dubna. These discoveries are the direct result of close collaboration between Russian and U.S. scientists leveraging the unique research capabilities of each nation. This collaboration has enabled the discovery of five new heaviest elements and over fifty new superheavy nuclei at the Island of Stability. The systematic increase in half-lives, over three orders of magnitude across multiple superheavy nuclei as neutron number increases, clearly demonstrates the existence of a new shell gap enhancing the stability of nuclei as the neutron number N=184 is approached.