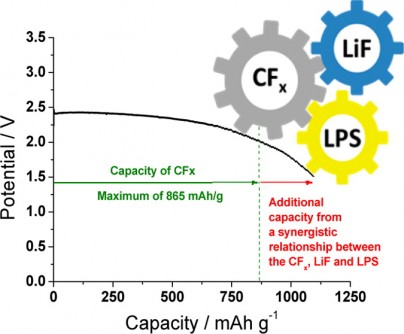 When ORNL researchers incorporated a solid lithium thiophosphate electrolyte into a lithium-carbon fluoride battery, the device generated a 26 percent higher capacity than what would be its theoretical maximum if each component acted independently.

In a study published in the Journal of the American Chemical Society, ORNL researchers challenged a long-held assumption that a battery’s three main components -- the positive cathode, negative anode and ion-conducting electrolyte -- can play only one role in the device.

The electrolyte in the team’s new battery design has dual functions: it serves not only as an ion conductor but also as a cathode supplement. This cooperative chemistry, enabled by the use of an ORNL-developed solid electrolyte, delivers an extra boost to the battery’s capacity and extends the lifespan of the device.

“This bi-functional electrolyte revolutionizes the concept of conventional batteries and opens a new avenue for the design of batteries with unprecedented energy density,” said ORNL’s Chengdu Liang.

The team demonstrated the new concept in a lithium carbon fluoride battery, considered one of the best single-use batteries because of its high energy density, stability and long shelf life. When ORNL researchers incorporated a solid lithium thiophosphate electrolyte, the battery generated a 26 percent higher capacity than what would be its theoretical maximum if each component acted independently. The increase, explains Liang, is caused by the cooperative interactions between the electrolyte and cathode.

“As the battery discharges, it generates a lithium fluoride salt that further catalyzes the electrochemical activity of the electrolyte,” Liang said. “This relationship converts the electrolyte -- conventionally an inactive component in capacity -- to an active one.”

The improvement in capacity could translate into years or even decades of extra life, depending on how the battery is engineered and used. Longer-lived disposable batteries are in demand for applications such as such as artificial cardiac pacemakers, radiofrequency identification devices, remote keyless system, and sensors, where replacing or recharging a battery is not possible or desirable.

“If you have a pacemaker, you don’t want to undergo surgery every 10 years to replace the battery,” Liang said. “What if a battery could last 30 to 50 years? Our fundamental research is opening up that possibility through a new design mechanism.”

The study is published as “Pushing the Theoretical Limit of Li-CFx Batteries: A Tale of Bi-functional Electrolyte.” Coauthors are ORNL’s Ezhiylmurugan Rangasamy, Juchuan Li, Gayatri Sahu, Nancy Dudney and Chengdu Liang. The work was sponsored by the Division of Materials Sciences and Engineering in DOE’s Office of Science.

The materials synthesis and characterization for the study were conducted at the Center for Nanophase Materials Sciences. CNMS is one of the five DOE Nanoscale Science Research Centers supported by the DOE Office of Science, premier national user facilities for interdisciplinary research at the nanoscale. Together the NSRCs comprise a suite of complementary facilities that provide researchers with state-of-the-art capabilities to fabricate, process, characterize and model nanoscale materials, and constitute the largest infrastructure investment of the National Nanotechnology Initiative. The NSRCs are located at DOE's Argonne, Brookhaven, Lawrence Berkeley, Oak Ridge and Sandia and Los Alamos national laboratories. For more information about the DOE NSRCs, please visit http://science.energy.gov/bes/suf/user-facilities/nanoscale-science-research-centers/. ORNL is managed by UT-Battelle for the Department of Energy's Office of Science.

Cutline: When ORNL researchers incorporated a solid lithium thiophosphate electrolyte into a lithium-carbon fluoride battery, the device generated a 26 percent higher capacity than what would be its theoretical maximum if each component acted independently.