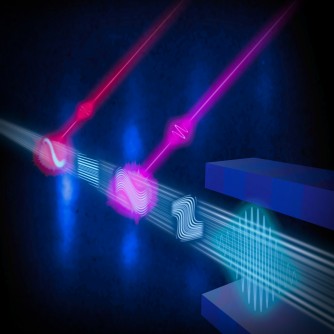 A SLAC-led research team manipulated a beam of electrons (from top left to bottom right) with conventional laser light (red) in a way that could produce purer, more stable pulses in X-ray lasers. 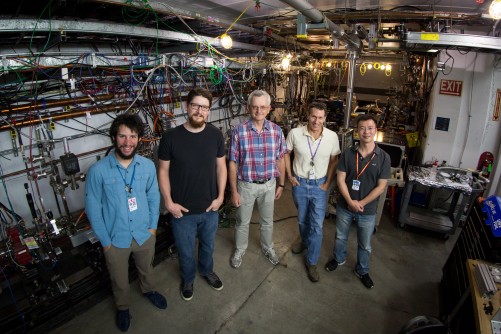 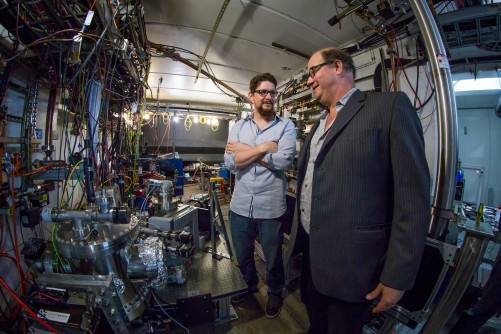 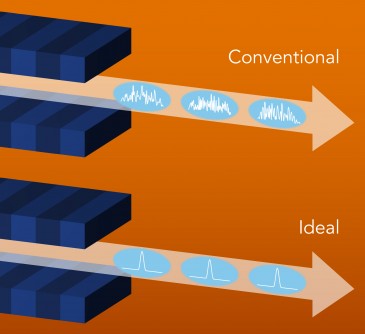 X-ray lasers amplify X-ray pulses (shown within the blue ovals) from electron beams (depicted as arrows) inside magnets known as undulators (left). Top: Each pulse normally contains a spectrum of X-ray colors and intensities that changes from pulse to pulse. Bottom: A technique known as echo-enabled harmonic generation (EEHG) could produce stable pulses containing a single X-ray color that vary very little from shot to shot. 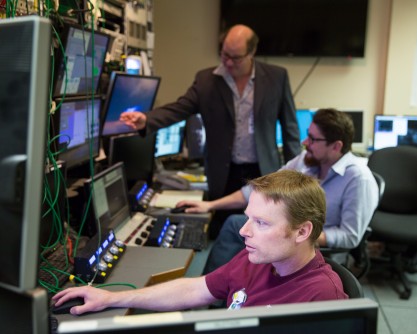 From front: Michael Dunning, Erik Hemsing and Carsten Hast in the NLCTA control room, where the team runs the EEHG experiment. 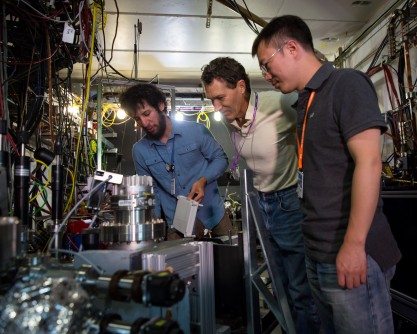 From left: Bryant Garcia, Tor Raubenheimer and Dao Xiang look at a spectrometer that the EEHG team custom-designed for their study.

Newswise — Researchers from the Department of Energy’s SLAC National Accelerator Laboratory and Shanghai Jiao Tong University in China have developed a method that could open up new scientific avenues by making the light from powerful X-ray lasers much more stable and its color more pure.

The idea behind the technique is to “seed” X-ray lasers with regular lasers, whose light already has these qualities.

“X-ray lasers have very bright, very short pulses that are useful for all sorts of groundbreaking studies,” says SLAC accelerator physicist Erik Hemsing, the lead author of a study published today in Nature Photonics. “But the process that generates those X-rays also makes them ‘noisy’ – each pulse is a little bit different and contains a range of X-ray wavelengths, or colors – so they can’t be used for certain experiments. We’ve now demonstrated a technique that will allow the use of conventional lasers to make stable, single-wavelength X-rays that are exactly the same from one pulse to the next.”

The method, called echo-enabled harmonic generation (EEHG), could enable new types of experiments, such as more detailed studies of electron motions in molecules.

“We need better control over X-ray pulses for such experiments,” says Jerome Hastings, a researcher at SLAC’s Linac Coherent Light Source (LCLS) X-ray laser, who was not involved in the study. “The new study demonstrates that EEHG is a very promising method to get us there, and it could become a driver for science that can’t be done today.” LCLS is a DOE Office of Science User Facility.

The process of generating X-ray laser pulses starts with accelerating bunches of electrons to high energies in linear particle accelerators. The speedy electrons then slalom through a special magnet known as an undulator, where they send out X-rays at every turn.

Those X-rays, in turn, interact with the electron bunches, rearranging them into thin slices, or microbunches. The electrons in each microbunch collectively emit light that gets further amplified to produce extremely bright pulses of X-ray laser light.

However, each microbunch of electrons radiates a little bit differently, resulting in X-ray pulses that contain spikes of several wavelengths with different intensities that vary from pulse to pulse. This “noise” poses challenges for applications that require identical X-ray pulses.

“Optical and other conventional lasers, on the other hand, generate single-color light in a highly reproducible way,” says co-author Bryant Garcia, a graduate student in SLAC’s Accelerator Directorate. “If we could use their regular pulses as ‘seeds’ to form more regular microbunches in the electron beam, the X-ray laser pulses would also be much more uniform and stable.”

The problem is that wavelengths of conventional laser light are too long to directly seed the electron bunches. To get around that, researchers must shorten the wavelength by creating “harmonics” – light whose wavelength is a fraction of the original laser light.

“Our study shows for the first time that we can generate the harmonics needed to slice electron bunches finely enough for X-ray laser applications,” Hemsing says.

In their demonstration experiment at SLAC’s Next Linear Collider Test Accelerator (NLCTA), the researchers shone pairs of laser pulses on electron bunches passing through two magnetic stages, each composed of an undulator and other magnets. The first, optical-wavelength pulse left its “fingerprint” on the electron bunch, while the second, infrared pulse created an “echo” of the first that also contained harmonics.

Together the laser pulses shuffled the electrons in the bunch so they formed microbunches in a very controlled and reproducible way – stable seeds that could be amplified to produce stable X-rays in future experiments.

A Technique with Perspective for X-ray Lasers around the World

The idea for the method was developed in 2009 by SLAC accelerator physicist Gennady Stupakov, one of the study’s co-authors. As a powerful new way of seeding future X-ray lasers, the concept immediately sparked excitement in the global research community. Since then, researchers have been trying to generate higher and higher harmonics, with the goal of reaching X-ray wavelengths of 10 nanometers or less.

“We’ve now reached the infrared laser’s 75th harmonic, which allows us to produce microbunches able to generate light with a wavelength of 32 nanometers,” Bryant says. “This brings us for the first time within reach of our goal.”

Although the method has yet to be implemented at an X-ray laser – the team is planning first X-ray EEHG experiments at the FERMI free-electron laser in Trieste, Italy – its benefits for light sources around the world are foreseeable.

“Since EEHG produces microbunches by using well-defined laser pulses, all electrons emit light of the same color,” Hemsing says. “This has the potential to produce X-ray pulses that are 10 times sharper and brighter, and stable over time.”

Researchers would also gain more control over X-ray laser pulses. For example, by changing the harmonic in the experiment, scientists could easily tune the color of the X-ray light.

Other researchers involved in the study were SLAC’s Michael Dunning, Carsten Hast and Tor Raubenheimer, the principal investigator for the EEHG project, as well as Dao Xiang from Shanghai Jiao Tong University in China. The study is the culmination of the six-year program "Accelerator R&D for a Soft X-ray Free-Electron Laser: Echo-Enabled Harmonic Generation," which was funded by the DOE Office of Science, Basic Energy Sciences. Additional funding sources were the DOE Office of Science, High Energy Physics; the Major State Basic Research Development Program, China; and the National Natural Science Foundation, China. 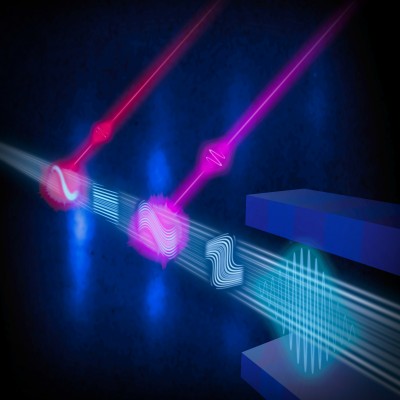 Caption: A SLAC-led research team manipulated a beam of electrons (from top left to bottom right) with conventional laser light (red) in a way that could produce purer, more stable pulses in X-ray lasers. 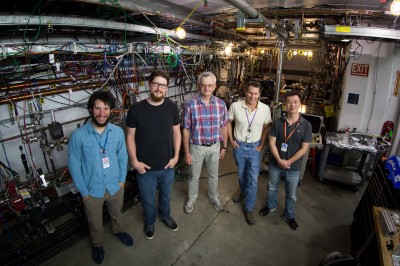 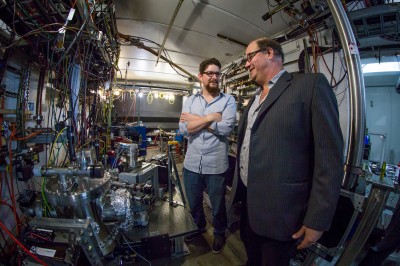 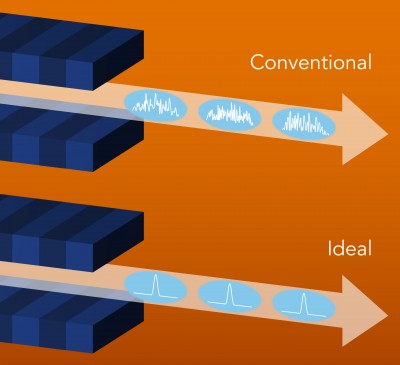 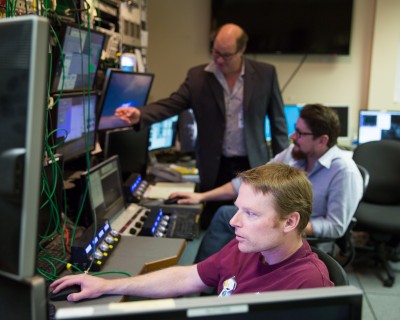 Caption: From front: Michael Dunning, Erik Hemsing and Carsten Hast in the NLCTA control room, where the team runs the EEHG experiment. 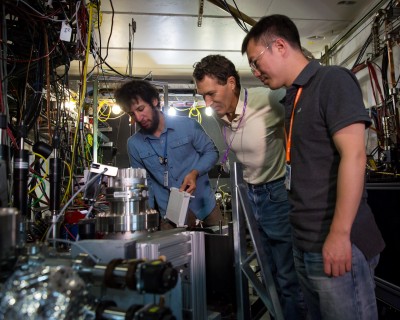 Caption: From left: Bryant Garcia, Tor Raubenheimer and Dao Xiang look at a spectrometer that the EEHG team custom-designed for their study.