Electrolyte Genome Could Be Battery Game-Changer

How Berkeley Lab project for computational screening of molecules could accelerate electrolyte discovery. 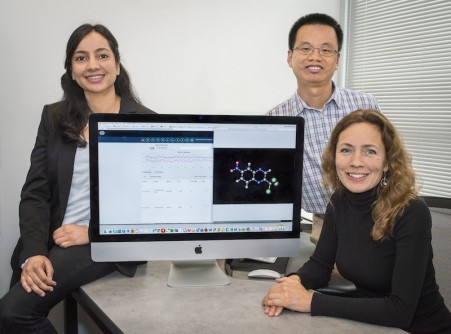 Newswise — A new breakthrough battery—one that has significantly higher energy, lasts longer, and is cheaper and safer—will likely be impossible without a new material discovery. And a new material discovery could take years, if not decades, since trial and error has been the best available approach. But Lawrence Berkeley National Laboratory (Berkeley Lab) scientist Kristin Persson says she can take some of the guesswork out of the discovery process with her Electrolyte Genome.

Think of it as a Google-like database of molecules. A battery scientist looking for a new electrolyte would specify the desired parameters and properties, and the Electrolyte Genome would return a short list of promising candidate molecules, dramatically speeding up the discovery timeline.

“Electrolytes are a stumbling block for many battery technologies, whether the platform is designed for electric vehicles or a flow battery for grid applications,” Persson said. “What we can do is calculate the properties of a large number of molecules and give experimentalists a much better set of materials to work with than if they were to explore all possible combinations.”

The electrolyte is a chemical substance that carries electrical charge between the battery’s anode and cathode to charge and discharge the cell. It consists of a salt and solvent, possibly additives and, not by design, impurities. Persson’s Electrolyte Genome, launched more than two years ago, uses high-throughput computer screening to calculate the properties not only of these three components but also their interactions with each other.

“If we can come up with an electrolyte that has a higher electrochemical window for multivalent batteries, or with larger solubility for certain redox molecules, if we can solve either of these, you suddenly enable the whole industry,” Persson said. “It could be a game-changer.”

Faster, smarter, betterBesides being faster and more efficient in screening out bad candidates, the Electrolyte Genome offers two other significant advantages to battery scientists. The first is that it could generate novel ideas. “While there are some amazing organic chemists out there, this allows us to be agnostic in how we search for novel ideas instead of relying purely on chemical intuition,” Persson said. “We can be surprised by what we find by combining experience with new, non-traditional ideas.”

The second advantage of the Electrolyte Genome is that it can add to scientists’ fundamental understanding of chemical interactions.

“It adds explanations to why certain things work or don’t work,” Persson said. “Frequently we rely on trial and error. If something doesn’t work, we throw it away and go to the next thing, but we don’t understand why it didn’t work. Having an explanation becomes very useful—we can apply the principles we’ve learned to future guesses. So the process becomes knowledge-driven rather than trial and error.”

How it works – funnel methodThe Electrolyte Genome uses the infrastructure of the Materials Project, a database of calculated properties of thousands of known materials, co-founded by Persson and Gerbrand Ceder of MIT. The researchers apply a funnel idea, doing a first screening of materials by applying a series of first principles calculations for properties that can be calculated quickly and robustly. This winnows down the candidate pool, on which they do a second screening for another property, and so on.

The concept was described in a recent essay in The Journal of Physical Chemistry Letters co-authored by Persson and her collaborators at Berkeley Lab and Argonne National Laboratory.

With a short list of candidate molecules, researchers can then perform more detailed computational evaluations, applying molecular dynamics simulations or other calculations as needed, for example to characterize the interactions of the different components.

The number of possible combinations is infinite since so many different salts can be combined with so many different solvents; plus impurities play a role. So Persson and her team do work closely with experimentalists to guide their research. “Because the space is so vast, we typically don’t throw the whole kitchen sink at it because it would take forever,” she said. “We tend to take some base molecule or some idea, then we explore all the variations on that idea. That’s the way to attack it.”

The methodology has been validated with known electrolytes. Using the supercomputers at Berkeley Lab’s National Energy Research Scientific Computing Center (NERSC), the researchers can screen hundreds of molecules per day.

To date, more than 15,000 molecules for electrolytes—including 10,000 redox active molecules, hundreds of conductive network molecules, and salts, solvents, and more—have been calculated. Screening such quantities of molecules for suitable properties using traditional synthesis and testing techniques would take decades.

The Electrolyte Genome’s first major scientific finding—that magnesium electrolytes are very prone to forming ion pairs, which impacts several crucial aspects such as conductivity, charge transfer and stability of the electrolyte—was published in February in the Journal of the American Chemical Society.

They had another success screening molecules for redox capabilities for flow batteries for fellow Berkeley Lab scientist Brett Helms. “He basically gave us a chemical space of organogelator molecules and asked, ‘Can you tell me the best molecule if I want a voltage window that’s precisely here,’” Persson said. “We filtered down about a hundred candidates to one. It worked, and the molecule fit the intended purpose perfectly.”

The Electrolyte Genome is funded by the Joint Center for Energy Storage Research (JCESR), a Department of Energy multi-partner Energy Innovation Hub announced in 2012, led by Argonne National Laboratory and including Berkeley Lab. It is open source and will be made public by the end of JCESR’s five-year charter, at the latest, according to Persson.