Elongated Ring Polymers Get Tied Up in Knots 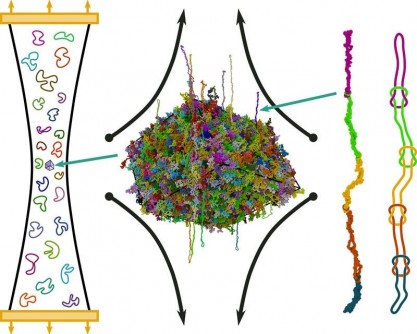 Newswise — Polymer fluids are made of long chains of atoms. Scientists have used simulations to discover a special polymer liquid that takes this behavior to the extreme. When researchers elongate necklace-like ring polymers, the molecules don’t just stretch out; they also tie themselves into knots. This forms massive molecular chains that can increase the fluid’s viscosity, or resistance to flow, by a factor of 20.

Ring polymers are materials that consist of many repeating blocks of atoms or molecules that form a loop. They occur naturally in human DNA. Ring polymers behave unlike many other polymer structures. For example, they tend to knot, something unprecedented in polymer physics. Scientists’ discovery of this tendency could provide insights into how ring DNA behaves in the human body. Researchers can also use this behavior to design more versatile industrial polymers. Since knots only form during stretching, intelligent polymers could be designed that adapt their viscosity in response to different flows. This characteristic could help regulate how polymers flow in industrial applications.

Many polymer liquids flow easily when stretched gently but become viscous and solid-like when stretched rapidly. This phenomenon, known as strain hardening, happens when the liquid is deformed so fast that individual polymer chains become elongated at the molecular scale. Understanding the physics of strain hardening is important for a range of applications, from controlling blood clotting to processing and recycling plastic materials to polymers for 3D printing. Most of the time, strain hardening disappears if a polymer is stretched gently. However, scientists at the Center for Integrated Nanotechnologies, a Department of Energy Office of Science user facility, have used molecular simulations to show that a special type of polymer liquid made of polymer rings defies this rule. No matter how slowly these liquids are stretched, they always grow more viscous and solid-like. The researchers found that stretching, or elongational flow, drives the polymer rings to tie together into long, molecular chains that act like massive molecules and that elongate even when flow is weak. The formation of just a small number of these elongated daisy-chains can produce a massive increase in the fluid viscosity. This means it behaves more like a solid. This characteristic could be harnessed to design intelligent fluids that become highly viscous when elongated but flow easily under different flow conditions.

This research was conducted with financial support from the National Science Foundation, the National Institutes of Health, and the Cystic Fibrosis Foundation. This work was also supported by the Sandia National Laboratories Laboratory Directed Research and Development Program. This work was performed, in part, at the Center for Integrated Nanotechnologies, a DOE Office of Science user facility.