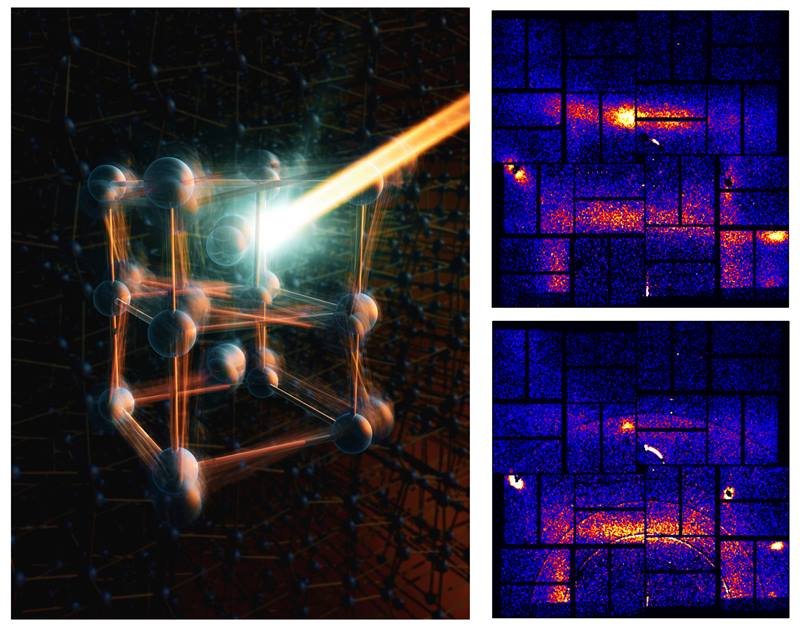 A representation of the shift of atoms after the electrons are excited by an ultrafast pulse of light. Before and after positions are superimposed, showing transitions. Scattering data taken at a tenth (top) and one picosecond (bottom).

How atoms react to a sudden burst of light shows scientists how the larger material might act in sensors, data storage devices, and more. As an analogy, imagine a dance floor with everyone moving in a carefully choreographed pattern. That’s the atoms in a crystal structure. There’s a pattern. Suddenly, the music skips and the song changes. That’s the laser light coming in and exciting the atoms. Do the atoms move in unison or is it chaotic? Scientists found that after the laser pulse hit a vanadium oxide film, the vanadium atoms moved chaotically and quickly. The atoms moved in tenths of a picosecond, the time scale of typical thermal vibrations of atomic positions in a solid.

Knowing the disordered path of atoms as they shift into a new order lets scientists develop control schemes for the vibrational motion of atoms. Manipulating atomic positions in time is fundamental to making new dynamically responsive solid forms of matter. Light can then be used to abruptly switch the properties of materials on and off. For example, light could switch internal magnetic and electric field ordering, which could be useful for sensors and data storage.

Think of a group of dancers as an array of partners participating in a bigger assembly of line dancers. There are local pairings and movements among the dancers but also well-defined positions along the line and common patterns across the group as a whole. One can think of atoms in a crystal in a similar fashion. They have local partners and bonds but also have a group structure. What happens when the music abruptly changes and the type of dance becomes a new one? Is the transition scripted like that of a marching band, where the rows of performers expand or rotate synchronously and smoothly into a new formation? Or, does each person continue their drift from the movement of the last song and independently shift into positions and movements of the next? One transition is ordered and the other is more chaotic and less globally scripted.

Similar issues of structure and dynamics take place in a vanadium oxide crystal when it undergoes a phase transition from a structure with paired vanadium atoms to one with equal spacings between the atoms. The bonding environment affecting the vanadium atoms is different for each structure. In this research, scientists used a pulsed optical laser to quickly excite the electrons in the vanadium oxide material. The light modified the local atomic bonds and effectively “changed the music” for the vanadium atoms. Researchers used a technique called diffuse X-ray scattering to measure the resultant disorder and deviations from the periodic lattice. They determined that the atoms do not shift together smoothly into a new formation but rather rapidly transit along existing individual trajectories toward the settling points associated with the new structure. This transition happens as fast as a single cycle of typical atomic vibrations in a crystalline lattice. In other words, following the group dance analogy, changing the music abruptly motivates the participants to rush individually along to their new positions associated with the new tune—less like a choreographed dance, more like a nightclub. Computer simulations of atom trajectories support this conclusion.By uncovering the way atoms dynamically respond, this research opens new doors in the design and control of material properties.