With funding from the Department of Energy, Clint Chapple, from left, and Rick Meilan are using genetic tools to find ways to convert trees into ethanol as a replacement for fossil fuels. 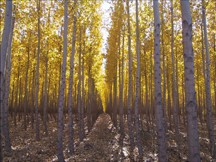 Newswise — A tree that can reach 90 feet in six years and be grown as a row crop on fallow farmland could represent a major replacement for fossil fuels.

Purdue University researchers are using genetic tools in an effort to design trees that readily and inexpensively can yield the substances needed to produce alternative transportation fuel. The scientists are focused on a compound in cell walls called lignin that contributes to plants' structural strength, but which hinders extraction of cellulose. Cellulose is the sugar-containing component needed to make the alternative fuel ethanol.

The Department of Energy's Office of Biological and Environmental Research is funding a $1.4 million, three-year study by Purdue faculty members Clint Chapple, Richard Meilan and Michael Ladisch to determine ways to alter lignin and test whether the genetic changes affect the quality of plants used to produce biofuels. A hybrid poplar tree is the basis for the research that is part of the DOE's goal to replace 30 percent of the fossil fuel used annually in the United States for transportation with biofuels by 2030.

In 2005 ethanol accounted for only 4 billion gallons of the 140 billion gallons of U.S. transportation fuel used - less than 3 percent. About 13 percent of the nation's corn crop was used for that production. Purdue scientists and experts at the U.S. departments of Agriculture and Energy say corn can only be part of the solution to the problem of replacing fossil fuel.

"If Indiana wants to support only corn-based ethanol production, we would have to import corn," said Chapple, a biochemist. "What we need is a whole set of plants that are well-adapted to particular growing regions and have high levels of productivity for use in biofuel production."

Chapple and Meilan want to genetically modify the hybrid poplar so that lignin will not impede the release of cellulose for degradation into fermentable sugars, which then can be converted to ethanol. The changed lignin also may be useable either in fuel or other products, they said. Currently about 25 percent of the material in plants is the complex molecule lignin, which in its present form could be burned to supply energy for ethanol production, but cannot be transformed into the alternative fuel.

Altering lignin's composition or minimizing the amount present in a cell wall could improve access of enzymes. With easier access, enzymes would be able to more efficiently convert cellulose to sugars. Current treatments used for extracting lignin from woody products for pulp and paper production are harsh and pollute the environment, said Meilan, a Purdue Department of Forestry and Natural Resources molecular tree physiologist.

To advance production of non-fossil fuels, Chapple and Meilan are using genetic tools to modify the poplar and then study how the alterations changed the plants' cell walls. Meilan also is attempting to find ways to produce trees that are reproductively sterile so they are unable to transfer introduced traits to wild trees.

When Chapple and Meilan are satisfied with the results, they will give wood samples to Ladisch, a distinguished professor of agricultural and biological engineering, so he can determine if the changes have created trees suitable for high-yield ethanol production.

Using hybrid poplar and its relatives as the basis for biofuels has a number of advantages for the environment, farmers and the economy, they said.

"Poplar is a low-maintenance crop; plant it and wait seven years to harvest it," Meilan said. "You're not applying pesticides every year; you're not trampling all over the site every year and compacting the soil. You're allowing nutrients to recycle every year when the leaves fall and degrade. In addition, you are more likely to have greater wildlife diversity in poplar plantings than in agricultural fields."

Experts are proposing planting the trees in rows just like any field crop. The basis of these tree plantations will be tens of millions of acres that the DOE and USDA have inventoried as being unused or fallow - previously used farmland that is standing empty because farmers are paid not to grow anything.

"We need a bioenergy crop that can grow many places year-round," Meilan said. "The genus Populus includes about 30 species that grow across a wide climatic range from the subtropics in Florida to sub-alpine areas in Alaska, northern Canada and Europe."

Corn can be grown only in a few areas of the world and only during a relatively short growing season. Besides needing potential fuel-source crops that can be grown year-round and in many geographical locations, experts also want to increase the per acre tonnage yield of crops and the gallons of ethanol per ton.

Researchers believe that using the hybrid poplar in its present form could produce about 70 gallons of fuel per ton of wood. Approximately 10 tons of poplar could be grown per acre annually, representing 700 gallons of ethanol. Corn currently produces about 4.5 tons per acre per year with a yield of about 400 gallons of ethanol. Changing the lignin composition could increase the annual yield to 1,000 gallons of ethanol per acre, according to experts. Planted on 110 million acres of unused farmland, this could replace 80 percent of the transportation fossil fuel consumed in the United States each year.

"We don't want to compromise the structural integrity of the plant," Meilan said. "We just want to alter the lignin composition to make it easier to liberate the cellulose for conversion to simple sugars that the yeast can gobble up and turn into ethanol."

Chapple and Meilan are affiliated with the Energy Center and the Bindley Bioscience Center at Purdue's Discovery Park. Meilan also is affiliated with the Hardwood Tree Improvement and Regeneration Center. Ladisch is director of Laboratory of Renewable Resources Engineering (LORRE).

Purdue's Discovery Park is designed to bring together researchers from a wide range of specialties and provide an environment for interdisciplinary research that explores new ideas, technologies and moves research to the marketplace. It is now a $300 million enterprise with 10 established research centers.

The summit is an invitation only event, but further information is available online at http://news.uns.purdue.edu/html4ever/2006/060808.Tyner.summit.html

With funding from the Department of Energy, Clint Chapple, from left, and Rick Meilan are using genetic tools to find ways to convert trees into ethanol as a replacement for fossil fuels. (Purdue Agricultural Communication photo/Tom Campbell)

A publication-quality photo is available at http://news.uns.purdue.edu/images/+2006/chapple-poplars2.jpg

A publication-quality photo is available at http://news.uns.purdue.edu/images/+2006/chapple-poplars.jpg