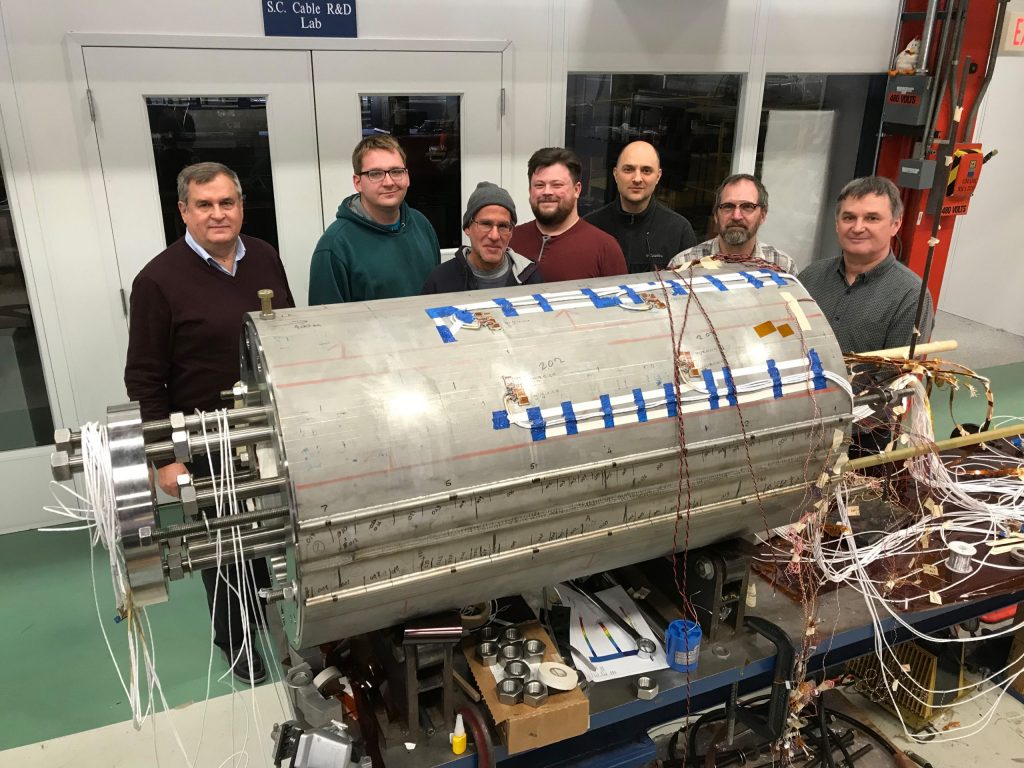 Fermilab recently achieved a magnetic field strength of 14.1 teslas at 4.5 kelvins on an accelerator steering magnet — a world record.

Newswise — To build the next generation of powerful proton accelerators, scientists need the strongest magnets possible to steer particles close to the speed of light around a ring. For a given ring size, the higher the beam’s energy, the stronger the accelerator’s magnets need to be to keep the beam on course.

Scientists at the Department of Energy’s Fermilab have announced that they achieved the highest magnetic field strength ever recorded for an accelerator steering magnet, setting a world record of 14.1 teslas, with the magnet cooled to 4.5 kelvins or minus 450 degrees Fahrenheit. The previous record of 13.8 teslas, achieved at the same temperature, was held for 11 years by Lawrence Berkeley National Laboratory.

The achievement is a remarkable milestone for the particle physics community, which is studying designs for a future collider that could serve as a potential successor to the powerful 17-mile-around Large Hadron Collider operating at CERN laboratory since 2009. Such a machine would need to accelerate protons to energies several times higher than those at the LHC.

And that calls for steering magnets that are stronger than the LHC’s, about 15 teslas.

“We’ve been working on breaking the 14-tesla wall for several years, so getting to this point is an important step,” said Fermilab scientist Alexander Zlobin, who leads the project at Fermilab. “We got to 14.1 teslas with our 15-tesla demonstrator magnet in its first test. Now we’re working to draw one more tesla from it.”

The success of a future high-energy hadron collider depends crucially on viable high-field magnets, and the international high-energy physics community is encouraging research toward the 15-tesla niobium-tin magnet.

At the heart of the magnet’s design is an advanced superconducting material called niobium-tin.

Electrical current flowing through it generates a magnetic field. Because the current encounters no resistance when the material is cooled to very low temperature, it loses no energy and generates no heat. All of the current contributes to the creation of the magnetic field. In other words, you get lots of magnetic bang for the electrical buck.

So the Fermilab team developed a magnet design that would shore up the coil against every stress and strain it could encounter during operation. Several dozen round wires were twisted into cables in a certain way, enabling it to meet the requisite electrical and mechanical specifications. These cables were wound into coils and heat-treated at high temperatures for approximately two weeks, with a peak temperature of about 1,200 degrees Fahrenheit, to convert the niobium-tin wires into superconductor at operation temperatures. The team encased several coils in a strong innovative structure composed of an iron yoke with aluminum clamps and a stainless-steel skin to stabilize the coils against the huge electromagnetic forces that can deform the brittle coils, thus degrading the niobium-tin wires.

The Fermilab group took every known design feature into consideration, and it paid off.

This is a tremendous achievement in a key enabling technology for circular colliders beyond the LHC,” said Soren Prestemon, a senior scientist at Berkeley Lab and director of the multilaboratory U.S. Magnet Development Program, which includes the Fermilab team. “This is an exceptional milestone for the international community that develops these magnets, and the result has been enthusiastically received by researchers who will use the beams from a future collider to push forward the frontiers of high-energy physics.”

And the Fermilab team is geared up to make their mark in the 15-tesla territory.

“There are so many variables to consider in designing a magnet like this: the field parameters, superconducting wire and cable, mechanical structure and its performance during assembly and operation, magnet technology, and magnet protection during operation,” Zlobin said. “All of these issues are even more important for magnets with record parameters.”

Over the next few months, the group plans to reinforce the coil’s mechanical support and then retest the magnet this fall. They expect to achieve the 15-tesla design goal.

And they’re setting their sights even higher for the further future.

“Based on the success of this project and the lessons we learned, we’re planning to advance the field in niobium-tin magnets for future colliders to 17 teslas,” Zlobin said.

It doesn’t stop there. Zlobin says they may be able to design steering magnets that reach a field of 20 teslas using special inserts made of new advanced superconducting materials.

Call it a field goal.

The project is supported by the Department of Energy Office of Science. It is a key part of the U.S. Magnet Development Program, which includes Fermilab, Brookhaven National Laboratory, Lawrence Berkeley National Laboratory and the National High Magnetic Field Laboratory.