Newswise — With a ceremony held today, the U.S. Department of Energy’s Fermi National Accelerator Laboratory joined with its international partners to break ground on a new beamline that will help scientists learn more about ghostly particles called neutrinos.

The beamline is part of the Long-Baseline Neutrino Facility (LBNF), which will house the Deep Underground Neutrino Experiment(DUNE), an international endeavor to build and operate the world’s most advanced experiment to study neutrinos.

Hosted by Fermilab, LBNF will send trillions of neutrinos 1,300 kilometers (800 miles) through the earth to South Dakota – a journey that requires no tunnel, as neutrinos are rarely stopped by matter. On their way, the neutrinos will cross two DUNE particle detectors: one at Fermilab and one a mile underground at the Sanford Underground Research Facility in South Dakota.

DUNE is a truly international experiment, bringing together more than 1,000 scientists from more than 30 countries around the world.

The last two years have been busy ones for this project. In July of 2017, Fermilab and its international partners convened at Sanford Lab for a unique groundbreaking ceremony a mile under the surface, kicking off construction of the South Dakota portion of the facility that will house the largest of the DUNE particle detectors.

And earlier this year, Fermilab began work on its site in Illinois for a new linear accelerator, part of its Proton Improvement Plan II (PIP-II) that will power the world’s most intense beam of neutrino particles, produced by LBNF. DUNE scientists will use this beam to study the properties of these tiny, elusive particles that could hold clues to many of the universe’s most closely guarded secrets.

Today’s ceremony celebrated the start of the site preparation work for the Illinois portion of LBNF. Over the next few years Fermilab will build a new beamline for its accelerator complex to direct those neutrino particles to South Dakota, and an underground cavern on the Fermilab site to house a multi-component particle detection system. Collectively that detector area and beamline are known as the LBNF near site, and it’s the final piece of the puzzle that will bring DUNE to life.

At the Fermilab site, crews will construct a new beamline that will extract proton particles from Fermilab’s largest accelerator, the Main Injector, and precisely aim them toward the DUNE detector in South Dakota. As part of the project, crews will also excavate an underground cavern on the Fermilab site that will hold a target hall (where the protons smash into a target to create smaller particles), a decay area (where the beam is filtered until it is almost entirely neutrinos) and a sophisticated particle detector, one designed to characterize the beam so scientists know exactly what they are sending to South Dakota and can predict what should show up on the receiving end.

Much of that work will happen over the coming years. The initial work will prepare the site for the beamline. Crews will deliver a clear field for the main construction. The road that runs around the Main Injector will also be re-routed out of the footprint of the future beamline facilities. For more on the upcoming work at the LBNF near site, read this article.

When completed, LBNF/DUNE will be the most advanced neutrino experiment ever built, and the largest experiment ever built in the United States. At its peak, construction of LBNF is expected to create almost 2,000 jobs in Illinois and a similar number in South Dakota. The experiment will attract students and young scientists from around the world, helping to foster the next generation of scientists and engineers.

Scientists on DUNE will study the interactions of neutrinos in both detectors, looking to better understand the changes these particles undergo as they travel across the Midwest in the blink of an eye. Scientists have known for some time that neutrinos come in three types. One of the most surprising things scientists have learned about neutrino, however, is that they change between those three types as they travel long distances. DUNE will bring us closer to understanding the mechanism that makes that possible.

DUNE scientists also will look for the differences in behavior between neutrinos and their antimatter counterparts, antineutrinos, which could give clues as to why the visible universe is dominated by matter. In addition, DUNE will watch for neutrinos produced when a star explodes, which could reveal the formation of neutron stars and black holes and will investigate whether protons live forever or eventually decay, bringing us closer to fulfilling Einstein’s dream of a grand unified theory.

Fermilab is America’s premier national laboratory for particle physics and accelerator research. A U.S. Department of Energy Office of Science laboratory, Fermilab is located near Chicago, Illinois, and operated under contract by the Fermi Research Alliance LLC, a joint partnership between the University of Chicago and the Universities Research Association, Inc. Visit Fermilab’s website at www.fnal.gov and follow us on Twitter at @Fermilab.

“With today’s ceremony, the Long-Baseline Neutrino Facility steps into a new phase, and the Department of Energy is excited to see work on the Fermilab site moving forward. The LBNF/DUNE project is ambitious, and the scientific rewards will be tremendous.”

“Fermilab is committed to be the best possible host to the world neutrino physics community. This groundbreaking for the LBNF near site begins the second phase of this amazingly ambitious project.”

“With today’s groundbreaking, site preparation work is now underway on both the Fermilab and South Dakota sites of LBNF. It’s been an impressive effort to get to this point, and this is a milestone worth celebrating.”

“Not only will LBNF house a fundamental tool for DUNE but it will itself be a unique facility for the study of neutrino interactions. There will be no other place in the world to study these phenomena with such precision, and these studies will have many implications for the search for new phenomena. Italy will be contributing important components for the near site, and the collaboration is an important one for both INFN and Fermilab.”

“This is an important milestone for the overall DUNE project, the goal of which is to reveal properties of neutrinos and potentially their role in the evolution of the universe. The DUNE project is bringing new ideas, new technologies, and it is therefore a major facility for young physicists around the world. France strongly supports the neutrino project in the U.S. and we expect to make major contributions, both technological and scientific.”

“I am pleased to see today’s step forward for the LBNF/DUNE project. It shows that this is a good time to join this collaboration. Poland is working to contribute cryogenic systems to the project, which is a natural fit for us given the country’s expertise in this technology. It was terrific to be here for the start of work on the near site.”

“Today marks a new phase for the LBNF/DUNE project, and FAPESP is quite excited about taking part in it. We are committed to increasing research impact in Sao Paulo and integrating that research into the rest of the world. This is an important experiment for us since we have been working on it since the beginning. FAPESP scientists have developed a key component of the detector, the ARAPUCA light detection system, and that has been very successful. We are excited to continue this collaboration.” 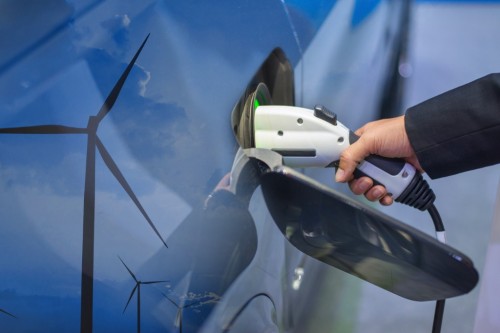