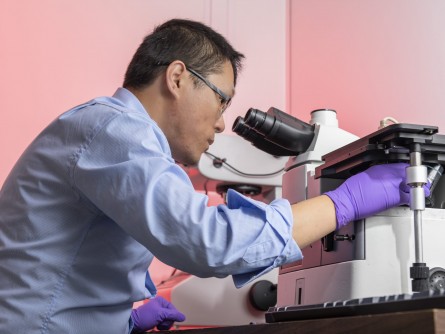 Fermilab scientist Xingchen Xu has received a $2.5 million award to advance research on superconducting magnets for the next generation of particle colliders.

A very high-energy collider is the most powerful future tool for direct discovery of new particles, according to the particle physics community. Designs for a next-generation collider call for magnetic field strengths in the neighborhood of 16 teslas and collision energies around 100 trillion electronvolts. The Large Hadron Collider, whose superconducting magnets operate at 8 teslas, holds a 13 trillion-electronvolt particle collision energy record.

Niobium-tin superconductors are unsung heroes of the physics world. They are what enable some nuclear magnetic resonance devices to run, and there are significant prospects for them in particle accelerators and plasma-confining fusion reactors, where they will allow superconducting magnets to operate at fields greater than 10 teslas.

To turn this superconducting material into an accelerator magnet, niobium-tin wire is wound into a coil. The number of windings and the amount of electrical current it carries determine the strength of the magnetic field generated in machines like the Large Hadron Collider or its future successor. The cost of building superconducting magnets increases sharply as coils get larger and could become expensive for the proposed Future Circular Collider, which would need around 8,000 tons of niobium-tin superconductor.

That is, until Xu pioneered a technique to increase the electrical-current capacity of niobium-tin superconductor.

By adding zirconium and oxygen to the niobium, Xu can triple this superconductor’s maximum electrical current at magnetic fields above 15 teslas. His achievement aims to boost superconductor performance to much higher levels.

In parallel research, Xu also plans to improve superconductor stability. By introducing substances with heat capacities hundreds of times higher than that of niobium-tin, Xu is working to make niobium-tin superconductor less sensitive to small temperature changes. Xu hopes that this approach will shorten the time it takes for a superconducting magnet to reach its full field strength.

With the award, Xu plans to purchase equipment needed to advance the project and fund work performed by industry partners.

“Projects like the proposed Future Circular Collider need niobium-tin superconductor with higher maximum critical current density and stability,” Xu said. “This award will continue to fund development of the technologies for magnet-grade conductors.”