Finding a Needle in a Crystalline Haystack 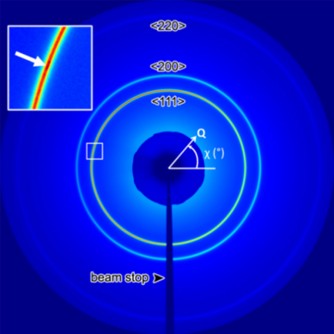 Seeing the needle in the haystack. The ring pattern from the new transmission X-ray diffraction analysis is from the polycrystalline nature of the alloy – in other words, it indicates that the atoms are arranged in small crystalline regions (called grains) that have many different orientations. The intensity spikes (insert) correspond to a few of grains that are exceptionally large.

Revealing new insights into how materials become “fatigued” and fail, a new X-ray analysis technique clearly shows the culprit -- rare, abnormally large crystalline regions. With repeated use, materials undergo a deformation process called fatigue. Fatigue can disrupt the arrangements of the atoms in the material. The atoms are often arranged in small crystalline regions, called grains. Fatigue may cause a very few of these grains to grow substantially, to 10-100 times their original size. The resulting grains are weak -- causing the material to break more easily. Finding and isolating such rare growth events is difficult and has hindered insights into this phenomenon. With this new technique, scientists can detect a few large grains in a sea of small grains and study the fatigue-induced phenomena of large grain growth.

A weakness of conventional characterization techniques is the limited amount of material that can be surveyed. It is like trying to understand a forest by looking at one leaf. This new method can detect exceedingly rare defects in a much larger volume. Understanding these rare events can result in identifying the “weak link” in an otherwise strong material. This new understanding could lead to stabilization schemes for advanced electrical steels and nanocrystalline metals that are impervious or highly resistant to fatigue crack initiation. These impervious metals could help save some of the millions of dollars that the U.S. economy loses to materials breaking during repeated use.

Conventional transmission electron microscopy and metallography techniques survey a limited amount of material in samples. Consequently, these techniques are restricted in their ability to detect rare events that may affect mechanical performance. For example, rare, abnormally large grain growth from fatigue may result in crack initiation and failure of nanocrystalline metals. For the first time, an X-ray diffraction method has identified a few large grains in a sea of millions of smaller grains in a nickel-based alloy. It is like finding a needle in a crystal haystack. In search of a few large grains, researchers at Sandia National Laboratories analyzed previously collected synchrotron X-ray data of a metal suspected of pre-existing fatigued-induced grain growth. Surprisingly, the fatigued metal exhibited statistically relevant spikes on the diffraction rings obtained from the polycrystals (solid composed of many randomly oriented crystals). The real proof came when in situ fatigue testing was conducted on an alloy. The data analyzed by conventional methods was indistinguishable before and after fatigue. However, this new method revealed spikes in the transmission X-ray diffraction pattern, indicating that the fatigue drove abnormally large grain growth. This new method to detect exceedingly rare defects in a much larger volume could help us understand and stabilize the weakest links in materials.