FIONA to Take on the Periodic Table’s Heavyweights 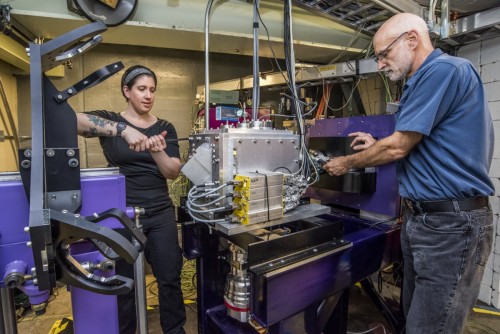 Berkeley Lab Scientists Jackie Gates, left, and Kenneth Gregorich work on FIONA, a new device at the Lab’s 88-Inch Cyclotron. FIONA is designed to precisely measure the mass number of the periodic table’s superheavy elements, and could also be useful for other types of explorations of superheavy elements. 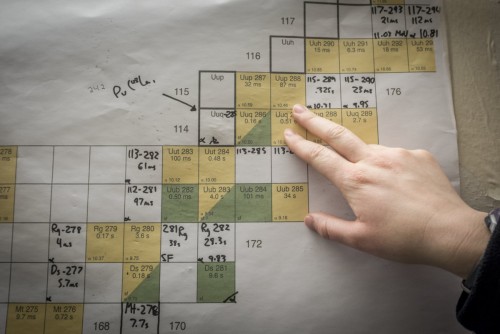 Jackie Gates, a Berkeley Lab staff scientist, points to a branching region of the periodic table that is populated by isotopes of superheavy elements. 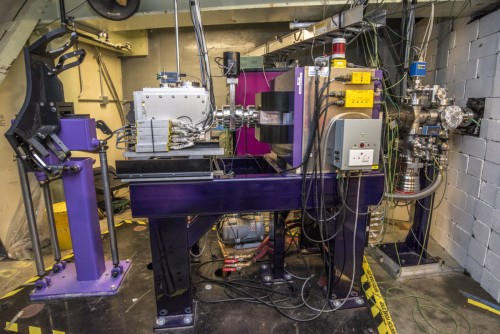 A view of FIONA in Cave 2 at Berkeley Lab’s 88-Inch Cyclotron. 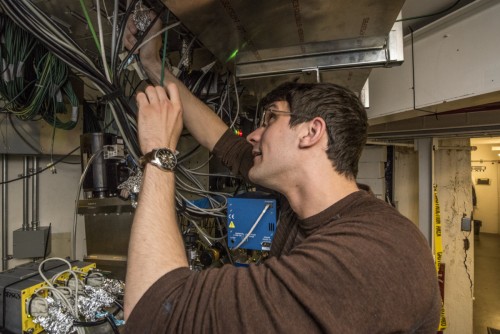 Jeffrey Kwarsick, a graduate student, works on the installation of FIONA at Berkeley Lab’s 88-Inch Cyclotron.

Newswise — A new tool at the Department of Energy’s Lawrence Berkeley National Laboratory (Berkeley Lab) will be taking on some of the periodic table’s latest heavyweight champions to see how their masses measure up to predictions.

Dubbed FIONA, the device is designed to measure the mass numbers of individual atoms of superheavy elements, which have higher masses than uranium.

“Once we have determined those mass numbers, we will use FIONA to learn about the shape and structure of heavy nuclei, guide the search for new elements, and to give us better measurements for nuclear fission and related processes in nuclear physics and nuclear chemistry research,” said Kenneth Gregorich, a senior scientist in Berkeley Lab’s Nuclear Science Division who has been involved in building and testing FIONA.

FIONA’s full name is “For the Identification Of Nuclide A.” The “A” is a scientific symbol representing the mass number -- the sum of protons, which are positively charged, and neutrons, which do not have an electric charge -- in the nucleus of an atom. The proton count, also known as the atomic number, is unique for each element and is the basis for the arrangement of elements in the periodic table.

FIONA builds on a long history of expertise in heavy element discoveries and nuclear physics research at Berkeley Lab. The Lab’s scientists have been involved in the discovery of 16 elements and also various forms of elements, known as isotopes, which have different numbers of neutrons.

Nuclear physicists have used the known masses of radioactive decay “daughter atoms” as a framework for determining the masses for these heavier “parent” elements.

Previous experiments have also helped to home in on the masses of some of the superheavy elements. But determining the mass number of some of the heaviest elements has remained out of reach because it is challenging to produce isolated atoms and to measure them before they rapidly decay.

FIONA’s measurements are expected to provide a better fundamental understanding of the makeup of these manufactured superheavy atomic nuclei.

“We will be exploring the limits of nuclear stability, answering basic questions such as how many protons you can put in a nucleus,” Gregorich said.

A holy grail in this field is to reach the so-called “island of stability,” an as-yet unexplored realm in the chart of nuclei where human-made isotopes are theorized to be long-lived.

“We will perhaps be probing the edge of this ‘island’ -- informing theories that predict such things so they can be refined,” Gregorich said.

FIONA was installed in November 2016 at Berkeley Lab’s 88-Inch Cyclotron, which produces intense particle beams for nuclear physics experiments and to test the radiation-hardness of computer chips for use in satellites, and has since undergone a range of tests to prepare it for a first round of experiments this summer. FIONA is an enhancement to a long-running machine called the Berkeley Gas-filled Separator (BGS) that separates atoms of superheavy elements from other types of charged particles.

“The separator’s job is to separate the heavy elements of interest from the beam and other unwanted reaction products,” Gregorich said, and FIONA is designed to move the desired atoms away from this “noisy” environment and to quickly measure them within about 10 thousandths of a second.

This is important because the human-made superheavy elements discovered so far have very short half-lives, in some cases decaying down to lighter elements on scales measured in thousandths of a second.

FIONA components include a new shielding wall that is designed to reduce background noise from other charged particles, a specialized trapping mechanism for atoms, and a sensitive silicon-based detector array that can measure the energy, position, and timing of the decay of radioactive atoms.

Several components of FIONA were constructed under contract with Argonne National Laboratory, and the mass analyzer was designed and built at Berkeley Lab.

“The design for FIONA is practical, flexible, and unique,” Gregorich said. “We were looking at different ways to perform mass separation, and everything else was either more expensive or more difficult.”

The initial beams that will be produced at the 88-Inch Cyclotron for the early FIONA experiments will use an isotope of calcium that is accelerated to strike a target containing a heavy element -- typically human-made americium, which is heavier than plutonium. This bombardment fuses some of the atomic nuclei to produce even heavier atoms.

Jackie Gates, a staff scientist in the Nuclear Science Division and a leader of the FIONA team, said, “Some other devices have a much higher mass resolution but a lower efficiency -- FIONA will have the highest efficiency.” This higher efficiency means that FIONA can isolate and measure more atoms of a specific superheavy element in a given time than comparable devices.

Even so, the creation of the heaviest atoms yet discovered is challenging: Of all the particles pouring through the separator, perhaps one in a quintillion (one followed by 18 zeros) reaching the experiment will form a superheavy element of interest.

That translates into the production of possibly one atom of interest per day, and several detections will be needed to determine the mass number, Gates said.

After separation in the Berkeley Gas-filled Separator, atoms of interest are trapped, bunched, and cooled in a device known as a radiofrequency quadrupole trap.

They are then sent through the FIONA mass separator, which contains crossed electric and magnetic fields. In the separator, the ions take on a looping trajectory, sending them to the detector with positions determined by their mass-to-charge ratio. The position in the detector at which the superheavy element radioactive decay is detected gives the mass number.

FIONA’s commissioning should wrap up this spring, Gates said, and one of the headline experiments for the new device will be to study decay processes associated with element 115, recently named moscovium (its periodic table symbol is “Mc”).

“The Berkeley Gas-filled Separator gave us 20 years of science,” Gates said, “and now we are looking at extending this another 10 to 20 years with FIONA.”

This work is supported by the Department of Energy’s Office of Nuclear Physics. 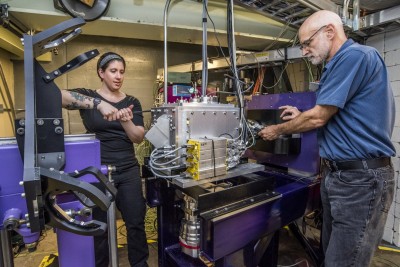 Caption: Berkeley Lab Scientists Jackie Gates, left, and Kenneth Gregorich work on FIONA, a new device at the Lab’s 88-Inch Cyclotron. FIONA is designed to precisely measure the mass number of the periodic table’s superheavy elements, and could also be useful for other types of explorations of superheavy elements. 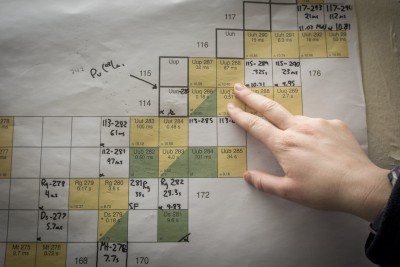 Caption: Jackie Gates, a Berkeley Lab staff scientist, points to a branching region of the periodic table that is populated by isotopes of superheavy elements. 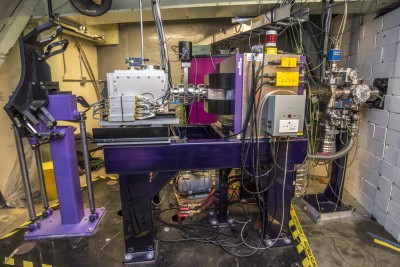 Caption: A view of FIONA in Cave 2 at Berkeley Lab’s 88-Inch Cyclotron. 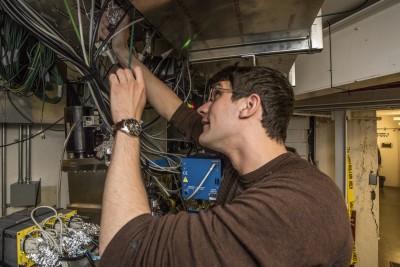