Neutrons provide the solution to nanoscale examination of living cell membrane and confirm the existence of lipid rafts. 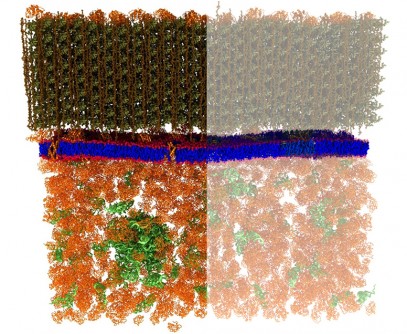 Neutron scattering is a valuable technique for studying cell membranes, but signals from the cell’s other components such as proteins, RNA, DNA and carbohydrates can get in the way (left). A team from Oak Ridge National Laboratory made these other components practically invisible to neutrons by combining specific levels of heavy hydrogen (deuterium) with normal hydrogen within the cell (right).

Newswise — The cell membrane, a thin bilayer of lipid molecules with embedded proteins, protects the cell from its outside environment and controls the movement of substances in and out of the cell. However, much about this thin bilayer of lipid molecules has remained a mystery despite extensive studies. This has been due to the difficulty of viewing a living cell membrane; previous methods employed to investigate membrane structure, such as X-rays and electron beams, damaged the membranes. Using cold neutrons  — for the first time — researchers directly examined a living cell membrane at the nanoscale.

Using isotopes to create internal contrast in living cells, scientists determined the membrane structure and thickness of the bacterium Bacillus subtilis. The team also confirmed the existence of the long hypothesized lipid rafts. These tightly packed free-floating membrane lipids and proteins are thought to be vital to cell signaling. The rafts are also thought to facilitate the movement of essential biomolecules in and out of the cell, along with other functions. The methods developed may prove valuable in biomass feedstock and biofuel production, where bacteria have an important role.

Examining a living cellular membrane has remained an unsolved challenge up to this point due to the dynamic, chemically diverse, and fragile nature of living cells. Too small to be seen by a traditional optical microscope, neutrons emerged as the solution to studying a living lipid bilayer at the nanoscale without damaging the cell. Neutrons can be used as a probe for characterizing biological materials because a neutron beam scattered by a biological sample creates a pattern that depends on the material’s isotopic composition and reflects the material’s structural arrangement. Deuterium is an isotope of a highly abundant atom in biological matter, hydrogen. It contains a neutron and a proton, in contrast to hydrogen, which contains a single proton but no neutron. This seemingly small difference makes substituting deuterium for hydrogen an ideal approach to studying membranes and other nanoscale biological systems. Cells perceive little difference between hydrogen and its isotope, deuterium, while the isotopes appear very differently using the neutron scattering technique. A team of researchers at Oak Ridge National Laboratory (ORNL) introduced enough deuterium into the membrane of the bacterium B. subtilis to differentiate it from other cell components. Further, the team tuned the specific proportions of deuterium and hydrogen by introducing — into the cell — two fatty acid (the molecules that comprise the membrane lipids) types, with unique isotope ratios. The cell incorporated the specific mix of isotope-labeled fatty acids into its membrane, and a non-uniform distribution of lipids was observed, confirming the lipid raft hypothesis. These experiments answer some of biology’s longest-standing questions, aligning with the U.S. Department of Energy’s Office of Science mission of providing fundamental science research to address some of the most pressing challenges of our time.