Forcing the Hand of Elusive Electrons 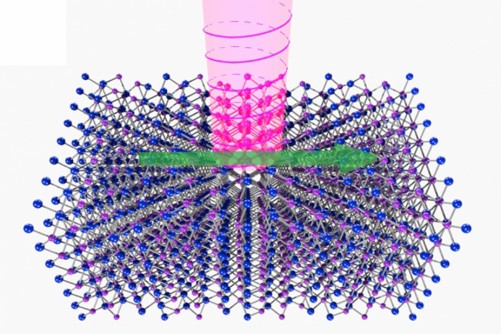 Scientists predicted and directly measured electrons in a semimetal. The electrons were behaving like elusive massless particles. Shining a circularly polarized light beam (pink spiral) onto a tantalum-arsenide semimetal (ball-and-stick crystal model) generates an electrical current (green arrow). Remarkably, the direction of the current flow changes by switching the light’s polarization from right-handed to left-handed, proving the handedness of exotic Weyl fermions.

A massless particle, a.k.a. Weyl fermion, predicted nearly 100 years ago, has been found in another corner of physics. Electrons in a semimetal can behave like these particles. They are either right-handed or left-handed—they are mirror images like our hands. Theory predicted that Weyl semimetals could produce handedness-dependent electrical current by shining circularly polarized infrared light onto it. Scientists then confirmed and measured this current. Changing from right- to left-handed light switched the direction of the current, meaning they could determine the handedness of these electrons.

The detection of handedness of electrons in a Weyl semimetal opens new experimental possibilities for studying and controlling these elusive massless particles and their quantum weirdness. Their quantum behavior can lead to novel optical phenomena. One example is photocurrents (electrical current induced by light). Another example is detection of photons (quantized packets of light) from the mid-infrared optical spectrum to lower frequencies (terahertz). Infrared detection is vital for night vision and heat imaging. Terahertz detection is useful for package-penetrating devices. In addition, the right- and left-handedness in a semimetal could be used like 0s and 1s in conventional computing. The result? Novel pathways to store and carry data.

An elusive massless particle with charge and spin ½, a.k.a. Weyl fermion, was predicted nearly 100 years ago. It still has not been observed in particle physics. However, scientists have predicted and observed electrons in the semimetal tantalum arsenide (TaAs) behaving just like the elusive particle. The particles have handedness determined by whether the directions of spin and motion of the particle are parallel or anti-parallel. In other words, the electrons in TaAs make up a novel topological phase called a Weyl semimetal. Therefore, electrons in a Weyl semimetal are the low-energy siblings of Weyl fermions in particle physics. Theory predicted that Weyl semimetals could support significant photocurrents due to the combination of specific symmetry breaking, finite chemical potential, and finite tilts of the Weyl energy spectrum. Recently, a team of scientists from multiple institutions set out to test this theory. In two publications, the scientists first predicted and then reported the direct optical observation of the induced photocurrent and therefore the handedness of Weyl fermions in the semimetal TaAs. In these experiments, researchers observed for the first time that the photocurrent reaches a maximum value for right circularly polarized light. Switching the light to left circularly polarized minimized the total photocurrent. These observations will lead to additional experiments, because the theory also suggests that Weyl materials that lack a point of inversion symmetry could be used to develop highly sensitive detectors for mid- and far-infrared light.