The award honors his contributions to research and education as founding president of the Okinawa Institute of Science and Technology Graduate University (OIST). 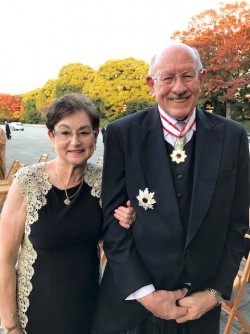 Former SLAC Director Jonathan Dorfan and his wife, Renee, at a ceremony at the Imperial Palace in Tokyo where he received Japan's Order of the Rising Sun.

Newswise — Former SLAC Director and Stanford University Professor Emeritus Jonathan Dorfan has been awarded Japan’s Order of the Rising Sun, Gold and Silver Star for his contributions as founding president of the Okinawa Institute of Science and Technology Graduate University (OIST). It is the highest award Japan bestows on university presidents.

The award was conferred Nov. 7 at the Imperial Palace in Tokyo by Prime Minister Shinzo Abe, followed by an audience for Dorfan and his wife Renee with the Emperor Akihito. The award recognizes Dorfan’s “contributions to the development of our nation’s research and education in science and technology,” according to the official citation.

“I am deeply honored and humbled to receive the Order of the Rising Sun,” Dorfan said. “The opportunity to impact science and education in Japan was a special privilege.”

Dorfan was director of the Department of Energy’s Stanford Linear Accelerator Center, now known as SLAC National Accelerator Laboratory, from 1999 to 2007. He became the first president of OIST in 2011 and served until his retirement in December 2016, when he and his wife returned to Palo Alto.

The Okinawa Institute of Science and Technology is an interdisciplinary graduate school offering a 5-year PhD program in science. More than half of the faculty and students are recruited from outside Japan, and all education and research is conducted entirely in English.

During his tenure, Dorfan oversaw the construction of the first phase of the university campus, implementing extensive research and teaching laboratories, housing and day care, as well as an engineering support building and a marine science station on the East China Sea. He also recruited 40 faculty members and 140 students from 35 nations on six continents and launched OIST’s second phase, which will double the size of the university by 2023.

An internationally recognized physicist, Dorfan spent the first 35 years of his career at SLAC, where he led the design of the B-factory and helped bring together the 10-nation BaBar collaboration, among many other accomplishments. He earned his bachelor’s degree in physics and applied mathematics at the University of Cape Town and his PhD in experimental particle physics from the University of California, Irvine.

Dorfan is credited with anticipating the growing importance of astrophysics by creating KIPAC, the Kavli Institute for Particle Astrophysics and Cosmology at SLAC. He also developed the concept of joint institutes between SLAC and Stanford, including KIPAC, the Stanford PULSE Institute and XLAM, which later became the Stanford Institute for Materials and Energy Sciences (SIMES). During his tenure, SLAC led the development of the main instrument for NASA’s Fermi Gamma-ray Space Telescope and secured the world’s first X-ray free-electron laser, the Linac Coherent Light Source.

Dorfan is a fellow of the American Association of Arts and Sciences and the American Physical Society (APS). He chaired the International Committee on Future Accelerators, served on the APS Division of Particles and Fields Executive Board and the High Energy Physics Advisory Panel, among others, and chaired the Particle Data Group Advisory Board. He was also an editor for Cambridge Press. As a member of the Weizmann Institute’s International Board, he serves as co-chair of its Scientific and Academic Advisory Committee.

Former DOE Secretary Ernest O. Moniz and former Secretary of State Condoleezza Rice, who is now the Thomas and Barbara Stephenson Senior Fellow at the Hoover Institution, were also among the 149 foreign nationals honored by the Japanese government in the Nov. 7 conferment. A list of past and current award winners can be found here.