Glancing into a Nuclear Mirror: the Fate of Aluminum-26 in Stars

Scientists explore the origin of Aluminum-26 in stars with a nuclear reaction that exploits the fact that neutrons and protons are stunningly similar. 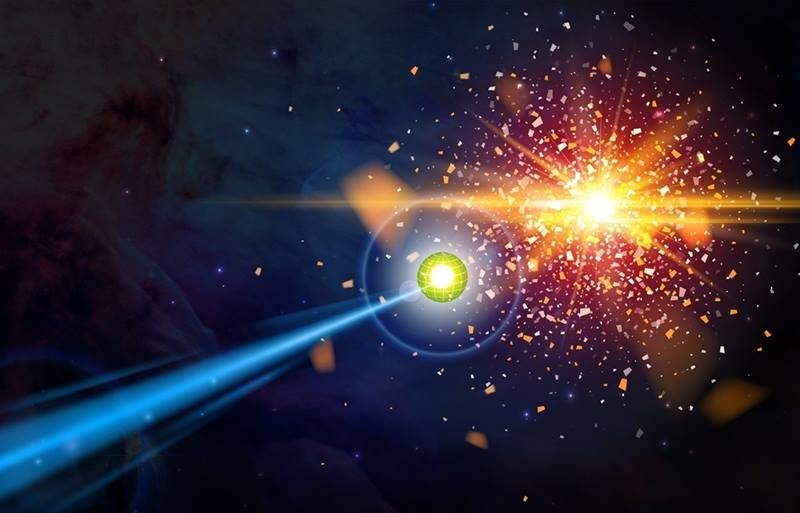 An illustration of a supernova explosion, which is where the type of reaction in the study occurs. An Aluminum-26 nucleus (green) escapes the explosion and subsequently decays via gamma-ray emission that can be observed by satellites.

Aluminum-26 has a long-lived quantum state that is difficult to study in a controlled, laboratory setting. A quantum state is a description of all the potential arrangements of the components in an atom or other system. Scientists instead use ion beam-target interactions to create an environment that adds a neutron to the radioactive isotope Silicon-26 to study excited quantum states in Silicon-27. These are the same states that are populated in the proton capture on the unwieldy long-lived quantum state of Aluminum-26. This approach is possible because of the remarkable symmetry between protons and neutrons. This symmetry means adding a proton to the long-lived state in Aluminum-26 is equivalent to adding a neutron to the ground state of Silicon-26.

Aluminum-26 provides rare insight into processes in stars. It decays into Magnesium-26, which emits a characteristic gamma ray observable with satellites. Magnesium-26 is detectable in presolar grains of material from stars that existed before our Sun. The composition of these grains carries the fingerprints of their parent stars. The destruction rate of Aluminum-26 by capturing a proton is critical for interpreting the amount of Magnesium-26 observed in the Universe. This research showed that the destruction of Aluminum-26 by proton capture on the long-lived state is eight times less frequent than previously estimated. This finding points to the need for more studies.

Radioactive Aluminum-26 allows scientists to glimpse into the hearts of dying stars. Its daughter isotope, Magnesium-26, has been observed in space and in presolar grains, whose content reflects the makeup of the parent star. The rate at which Aluminum-26 is destroyed by proton capture before it can decay is critical to understanding the amount of Magnesium-26 found in the Universe. However, Aluminum-26 has a long-lived quantum state that may be excited in stellar environments but less so in the laboratory. The proton capture onto this state must be measured, too. Scientists from the United Kingdom and the United States used beam-target experiments at the National Superconducting Cyclotron Laboratory at Michigan State University. The researchers used a neutron added to the radioactive isotope Silicon-26 to study excited quantum states in Silicon-27 that are the very same states that are populated in the proton capture of Aluminum-26. This was possible because protons and neutrons are subject to a remarkable symmetry, which makes adding a proton to the long-lived state in Aluminum-26 equivalent to adding a neutron to the ground state of Silicon-26. The results show that the destruction of Aluminum-26 through the long-lived state is eight times less frequent than previously estimated.

This research was funded by the Department of Energy (DOE) Office of Science, Office of Nuclear Physics; the National Science Foundation; the DOE National Nuclear Security Administration through the Nuclear Science and Security Consortium, and Science and Technologies Facilities Council (STFC) of the UK.