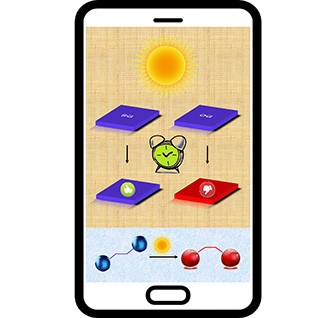 Organic glass is not the same as the glass in windows — the organic glass contains carbon in a structure that can easily deform due to sunlight. The upper schematic shows a comparison of two sets of organic glass films prepared by two methods and then exposed to light, resulting in color changes after extended times. On the right side, the film prepared by the cooling of a liquid (called ordinary glass, OG) readily changes color when exposed to light (or photoreacts). On the left side, the film prepared by vapor deposition has a densely packed molecular structure (called stable glass, SG) that prevents the photoreaction and hence the degradation. The reason for the color change is depicted in the bottom schematic showing that the molecular structure changes in response to light.

For materials in solar cells, cell phones, and other devices, the material should not change in undesirable ways when exposed to sunlight. Scientists determined how two glasses with the same composition but different fabrication processes behaved when exposed to light. Each glass had a carbon-based chemical composition. Vapor-deposited organic glass, where constituents were vaporized and combined as they were deposited on a surface to form a glass, was substantially more stable than ordinary organic glass. In ordinary glass, the chemicals were melted together and cooled. The molecules in the vapor-deposited glass were more densely packed than the liquid-cooled glass.

Carbon-based glass is used in certain electronics such as cell phones or television displays. It is also used in solar cells and other photovoltaic devices. Often, however, the glass degrades when exposed to light. The team’s new understanding of what creates photostability in glass will help improve the longevity of such devices.

A critical property of any material used in solar cells, cell phones, or other electronics that are exposed to sunlight is photostability, a measure of how a material resists changes in properties and molecular structure when exposed to light. A team of scientists prepared organic glass by vapor deposition, which densely packs the constituent molecules. They assessed the photostability through changes in the density and molecular orientation of glassy thin films after exposure to light. They found that vapor deposition substantially increases photostability — by a factor of 50 — relative to the state-of-the-art liquid-cooled glass in the model system, an azobenzene derivative. Although it is known that packing molecules closer together improves photostability in crystalline materials, this is the first time researchers saw a substantial increase in such stability in non-crystalline, amorphous glass. They showed that photostability correlated with glass density for density increases of up to 1.3 percent. They performed molecular simulations, which mimic glass preparation and the reactions between molecular structures. The simulations indicated that glass with higher density have substantially increased photostability. The new understanding of how to achieve enhanced photostability could help design better electronics for displays and photovoltaic devices with longer lifetimes.