Graphene Is Strong, but Is It Tough?

Berkeley Lab scientists find that polycrystalline graphene is not very resistant to fracture. 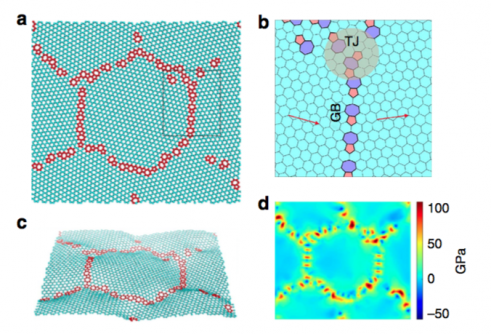 Newswise — Graphene, a material consisting of a single layer of carbon atoms, has been touted as the strongest material known to exist, 200 times stronger than steel, lighter than paper, and with extraordinary mechanical and electrical properties. But can it live up to its promise?

Scientists at the U.S. Department of Energy’s Lawrence Berkeley National Laboratory (Berkeley Lab) have developed the first known statistical theory for the toughness of polycrystalline graphene, which is made with chemical vapor deposition, and found that it is indeed strong (albeit not quite as strong as pristine monocrystalline graphene), but more importantly, its toughness—or resistance to fracture—is quite low. Their study, “Toughness and strength of nanocyrstalline graphene,” was published recently in Nature Communications.

“This material certainly has very high strength, but it has particularly low toughness—lower than diamond and a little higher than pure graphite,” said Berkeley Lab scientist Robert Ritchie. “Its extremely high strength is very impressive, but we can’t necessarily utilize that strength unless it has resistance to fracture.”

Ritchie, a senior scientist in the Materials Sciences Division of Berkeley Lab and a leading expert on why materials fail, was co-author of the study along with Ashivni Shekhawat, a Miller Research Fellow in his group. Together they developed a statistical model for the toughness of polycrystalline graphene to better understand and predict failure in the material.

“It’s a mathematical model that takes into account the nanostructure of the material,” Ritchie said. “We find that the strength varies with the grain size up to a certain extent, but most importantly this is a model that defines graphene’s fracture resistance.”

Toughness, a material’s resistance to fracture, and strength, a material’s resistance to deformation, are often mutually incompatible properties. “A structural material has to have toughness,” Ritchie explained. “We simply don’t use strong materials in critical structures—we try to use tough materials. When you look at such a structure, like a nuclear reactor pressure vessel, it’s made of a relatively low-strength steel, not an ultrahigh-strength steel. The hardest steels are used to make tools like a hammer head, but you’d never use them to manufacture a critical structure because of the fear of catastrophic fracture.”

As the authors note in their paper, many of the leading-edge applications for which graphene has been suggested—such as flexible electronic displays, corrosion-resistant coatings, and biological devices—implicitly depend on its mechanical properties for structural reliability.

Although pure monocrystalline graphene may have fewer defects, the authors studied polycrystalline graphene as it is more inexpensively and commonly synthesized with chemical vapor deposition. Ritchie is aware of only one experimental measurement of the material’s toughness.

Next, Shekhawat and Ritchie are studying the effects of adding hydrogen to the material. “We don’t know a lot about the fracture of graphene, so we’re trying to see if it’s sensitive to other atoms,” he said. “We’re finding the cracks grow more readily in the presence of hydrogen.”

The research was funded by the DOE Office of Science.