Grasses: The Secrets Behind Their Success

Researchers find a grass gene affecting how plants manage water and carbon dioxide that could be useful to growing biofuel crops on marginal land. 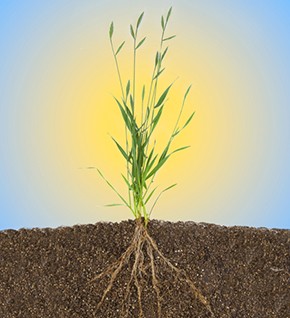 Brachypodium completes the set of strategically sequenced major grass genomes from the three most economically important subfamilies of grasses.

Newswise — Typical plants have two kidney-shaped guard cells in their leaves that swell to create pores, called stomata. The stomata regulate carbon dioxide and water transport. Grasses have further evolved to express two subsidiary cells flanking the guard cells, and this may explain why grasses control carbon dioxide and water transport better than other plants. In a recent study, researchers identified the genetics behind the subsidiary cell formation.

Subsidiary cells, unique to grasses, have been linked to improved growth. These cells allow a greater range of pore size and quicker stomatal responses. The ability to better control water loss and increase carbon assimilation in plants lets grasses better handle stressors, such as drought. These are all traits useful in plants grown as possible sources of biomass for development into biofuels. Understanding how grasses manage water could help identify and select bioenergy crops better suited for growing in otherwise marginal soils.

Brachypodium distachyon is a small, rapidly growing grass that serves as a model for candidate bioenergy grasses such as Miscanthus and switchgrass. For this reason, in 2010, the B. distachyon genome was sequenced and annotated as part of the U.S. Department of Energy’s (DOE) Joint Genome Institute (JGI), a DOE Office of Science user facility, Community Science Program. To further accelerate research in the development of biofuel feedstocks, a project to sequence thousands of B. distachyon mutants was selected for the 2015 Community Science Program portfolio. The library of sequenced mutants will aid researchers in studying and rapidly identifying and ordering plants with mutations in any gene in its genome. Using a forward genetic screen, a Stanford University team identified a B. distachyonsubsidiary cell identify defective (sid) mutant; this mutant is unable to produce subsidiary cells. By comparing the whole genome sequence of B. distachyon with the sid mutant, a 5-base pair deletion in the gene that encodes for a transcription factor was found, which the team called BdMUTE. Further, they identified BdMUTE as a mobile transcription factor responsible (and necessary) for coordinating the development of subsidiary and guard cell complexes. The unique subsidiary cells in grasses may allow for an enhanced performance when stressors, such as increased temperature or drought, are placed on the plant. Understanding the structure, function and expression of these transcription factors may add to the toolbox of methods for increasing drought resistance and resistance to other stressors in grasses that could contribute to biofuels.

The work was done at the Joint Genome Institute, a DOE Office of Science user facility.