Two dozen teams competed for a chance to go to the Nationals, and 60 trained volunteers worked to make the regional contest happen. 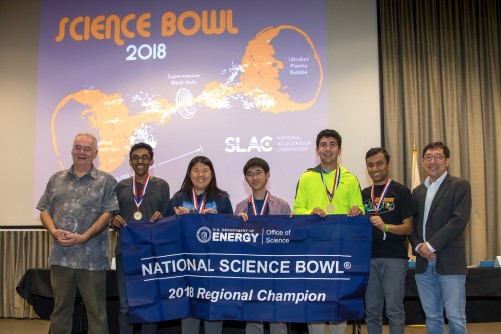 The winner, Harker School of San Jose, will go on to compete in the 2018 National Science Bowl® competition in Washington, D.C., in April.

It was the second consecutive win for Harker, which trounced its perennial rival, Lynbrook High School in San Jose, 108-58 in the final round of the regional contest. Each of the two high schools has beaten the other twice for the win during the past four years.

“Last year we were happy to make Nationals,” said Shaya Zarkesh, a Harker senior. “This year we have higher hopes.”

Everyone on this year’s Harker team will have Washington experience. Only one senior graduated from last year’s squad, and he’s been replaced by Emily Liu, who was on the Joaquin Miller Middle School team that won the National Middle School Science Bowl in 2016.

The Department of Energy created the National Science Bowl in 1991 to encourage student involvement in math and science activities important to DOE and the nation. This year, more than 9,000 high school students and 4,500 middle school students will compete in 65 high school and 50 middle school regional Science Bowl tournaments. SLAC hosted its first regional in 2005.

The SLAC Regional was coordinated by SLAC Outreach and Events Manager Rachel Isip and Ray Ng, who has helped organize local Science Bowl competitions since 1992, when he was education outreach coordinator at Sandia National Laboratories’ California campus in Livermore. They recruited and trained more than 60 volunteers who served as match moderators, scorekeepers, timekeepers and science judges. Many are SLAC employees or Stanford students who had competed in Science Bowls when they were in high school.

In the 16-minute competition rounds, moderators read tossup questions to be answered by the contestant who buzzes in first, as well as bonus questions where the four-person teams collaborate on an answer.

New this year is a free app, created last summer by Stanford Online High School senior Jake Polatty, that allows students to review the practice questions by subject or in random quiz-style modes. SOHS students live all over the country and communicate over the internet with teachers and teammates. During a team discussion last year, coach Alex McKale mentioned the potential value of an online study tool. Polatty, who lives in Rhode Island, immediately took up the challenge and had the first version ready in three months. It will soon be available for both Android and iOS devices. Polatty said the app has been downloaded 3,200 times by people in 28 countries on six continents.

Senior Freya Edholm has led Proof’s ascent from zero wins in 2015 to this year’s second-place finish in its round-robin group.

“Although I’d done many math competitions before, I thought I didn’t know any science,” she said. “Science Bowl has exposed me to so much interesting science that I now plan to major in chemical engineering.”