Heat's Role in the Madden-Julian Oscillation 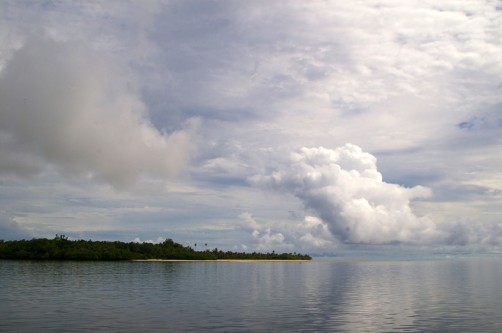 Climate researchers are studying ways to more accurately model the Madden-Julian Oscillation, a large-scale atmospheric circulation pattern associated with rainfall and drought across the tropics, including Indonesia (shown here).

Tropical monsoons in Indonesia and floods in the United States are both provoked by the Madden-Julian Oscillation (MJO), a process that results in pulses of clouds and precipitation moving eastward around the globe at about 5 meters per second. Despite the MJO's importance, global models often struggle to simulate the oscillation accurately. Researchers showed that MJO simulations are most sensitive to the existence of lower level heating in the atmosphere.

A better understanding of the heating distributions required to robustly simulate strong MJOs in climate models will improve insights into the dynamics of the climate system and projections of future climate.

Not only is the MJO the primary source of tropical variability on monthly timescales, it also affects weather outside the tropics, including winter precipitation in North America. Despite the MJO's importance in climate, global climate models have difficulty simulating the MJO accurately. The challenge may arise from the models' inability to adequately represent the atmospheric heating associated with changes in cloud populations. In a study supported by the Office of Biological and Environmental Research's Atmospheric System Research program, scientists used the Community Atmosphere Model version 4 to examine the relative importance of heating at different altitudes to the MJO. The results of the study show that MJO simulations are most sensitive to the existence of lower level heating in the atmosphere ahead of the center of anomalous rainfall. In addition, excess heating higher in the atmosphere degrades the MJO signal. The study also suggests that the standard Community Atmosphere Model version 4 has difficulty simulating the MJO because it produces sufficient upper level heating but not enough lower level heating. Given that lower atmospheric heating was most important to producing an MJO signal, these results indicate that accurate shallow convective parameterizations may be more important than deep convective ones in simulating the evolution of the MJO in GCMs.