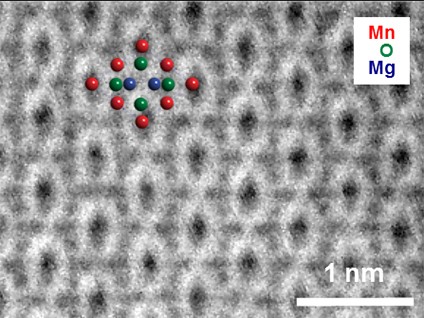 The location of magnesium inserted into a battery electrode material is shown in an atomic-resolution scanning transmission electron microscopy (STEM) image. The characteristic “diamond” unit cell is overlaid, indicating the atomic positions of manganese (red), oxygen (green), and magnesium (blue); clear occupancy of specific sites within the crystal, called tetrahedral sites, is shown.

In lithium-ion batteries, a singly charged lithium atom (or “ion”) flows between two electrodes while one electron is contributed to the electrical current in the external circuit. If too many lithium ions are intercalated (inserted between existing atomic layers), the electrode’s atomic structure can distort, which usually limits the ability to recharge the battery. In a battery electrode composed of manganese oxide (Mn2O4), magnesium ions with two positive charges (Mg2+) could provide two electrons per intercalated ion—twice the electrical current if present at the same density—without irreversible distortion of the electrode material. This research showed that Mg2+ intercalation into Mn2O4 was extensive and reversible.

Batteries are composed of two electrodes, an anode (positive charge) and a cathode (negative charge), separated by an electrical insulator. As the battery operates with electrical current flowing in the external circuit, positively charged atoms (or ions) flow internally between the two electrodes. Intercalation of too many ions from the electrolyte into the electrodes can cause distortion, which can limit the ability to recharge the battery. Batteries using Mg2+ ions instead of singly charged lithium ions have the potential for significantly increased energy density and the production of two electrons of electrical current for each intercalated ion. A major challenge for magnesium batteries is finding suitable cathode materials capable of storing a large amount of Mg2+ ions while operating at high voltage. This research demonstrates that Mn2O4 with the spinel structure is such a material. Researchers at the Joint Center for Energy Storage Research (JCESR) found that Mg intercalation into the electrode was extensive and reversible. The scientists used four techniques to characterize this phenomenon at multiple length and chemical scales. Electron microscopy with elemental analysis permitted visualization of the electrochemical intercalation. X-ray diffraction allowed confirmation of the expected structural transition upon intercalation. Nuclear magnetic resonance (NMR) and X-ray absorption spectroscopy (XAS) further validated the Mg intercalation. This research has confirmed the validity of a new class of materials for battery cathodes based on Mg2+ intercalation. Coupled with a pure Mg anode, these battery systems could have twice or more the energy density of today’s commercial lithium-ion batteries along with increased safety and reduced cost.