Honey, I Shrunk the Features for Low-Cost, Flexible, Large-Area Electronics 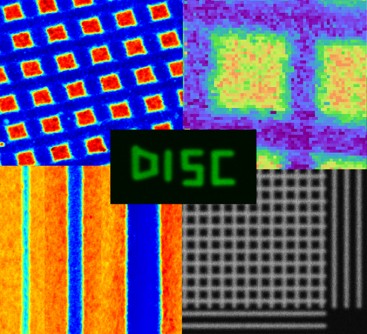 Complex electronics with features smaller than a single speck of dust (that is, less than a micrometer) were fabricated with solution-based photo-patterning that couples a chemical and optical method. The patterning process is nicknamed DISC, as patterned in the image, for doping-induced solubility control.

Solar panels, lights and computer displays could use upgrades. A key issue blocking these upgrades is the difficulty in creating large, dense and flexible polymer films that can control electricity. Standard fabrication techniques use a sacrificial light-sensitive polymer to create patterns. Think of it like painting with a stencil. However, the liquids used to remove the sacrificial polymers would damage an electronic polymer film being patterned. To overcome this fabrication challenge, scientists created an innovative technique. The new technique seamlessly combines a chemical process that substantially increases the electronic polymer’s durability and a light-induced reaction that allows nano-patterning.

Scientists can print extremely small features (less than a micrometer, or 50 times smaller than the average speck of dust) onto films. These tiny features could be used as pixels for your smartphone display or electronic switches to turn the pixel on and off. Imagine a phone that doesn’t break when you drop it. They can scale the technique up to quickly print on large films. The result? It could revolutionize manufacturing cheaper, high-density, flexible electronics for energy-efficient uses. These uses include solar cells, displays and lightings.

A team of scientists at the University of California, Davis, studying the effects of chemical dopants on the solubility of semiconducting polymers discovered and systematically developed a technique that enables photo-patterning of semiconducting polymers to unprecedented small feature sizes useful for high-areal-density electronics. The addition of organic molecules (dopants) to a thin film of semiconducting polymer converts the neutral polymer to an ionic state and renders it insoluble in a solvent that it was previously soluble in (referred to as a “good” solvent). In a second step, a specific wavelength (405 nanometers) of focused laser light is used to excite dopant molecules, leading to “de-doping” of the semiconducting polymer, which can once again be readily dissolved in a “good” solvent. Thus, when a doped polymer film is immersed in a “good” solvent and scanned with a focused laser light that excites dopants in a specific pattern, the polymer and dopants along the scanned tracks dissolve into the solvent phase. Dissolving the irradiated polymer leaves behind the desired pattern in the unexposed regions of the semiconductor polymer. Additionally, the insolubility afforded by the doping allows for more solution-based processes such as layering other polymers needed for multilayer integrated electronic circuits. This coupled chemical and optical process enables patterning of semiconducting polymers with a resolution smaller than the wavelength of the 405-nanometer light used for patterning. The ability to control the film solubility, topology and doping level at sub-micrometer length scales paves the way for rapid and inexpensive high-density organic electronics for such energy-efficient applications as organic photovoltaics, displays and light-emitting diodes.