How a New Telescope Will Measure the Expansion of the Universe

A next-generation experiment will create the largest 3D map of the universe and help Berkeley Lab scientists get a handle on dark energy. 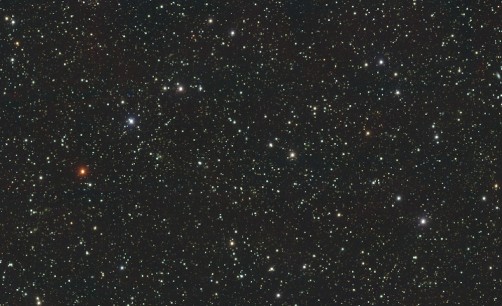 Two-dimensional map of the sky that will identify the galaxies that will be the targets for our spectroscopic measurements once DESI is built. 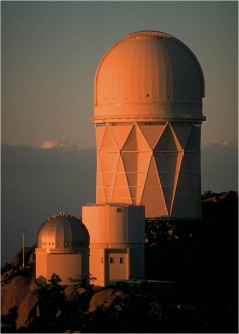 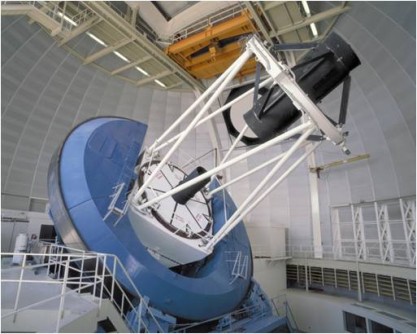 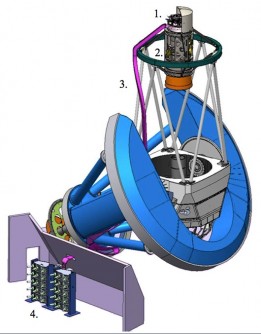 Newswise — For the past several years, scientists at the U.S. Department of Energy’s Lawrence Berkeley National Lab (Berkeley Lab) have been planning the construction of and developing technologies for a very special instrument that will create the most extensive three-dimensional map of the universe to date. Called DESI for Dark Energy Spectroscopic Instrument, this project will trace the growth history of the universe rather like the way you might track your child’s height with pencil marks climbing up a doorframe. But DESI will start from the present and work back into the past.

DESI will make a full 3D map pinpointing galaxies’ locations across the universe. The map, unprecedented in its size and scope, will allow scientists to test theories of dark energy, the mysterious force that appears to cause the accelerating expansion and stretching of the universe first discovered in observations of supernovae by groups led by Saul Perlmutter at Berkeley Lab and by Brian Schmidt, now at Australian National University, and Adam Riess, now at Johns Hopkins University.

Michael Levi and David Schlegel, physicists at Berkeley Lab, have been key players in DESI from the beginning. We sat down to discuss the future of the project and how this forthcoming map will help scientists better understand dark energy.

What does it mean to make a 3D map of the universe and how big will it be?Michael Levi: To start, DESI will use 2D imaging surveys to pick tens of millions of galaxies to study. Then the DESI instrument will give us redshifts of about 25 million galaxies. The redshifts are what gives you the depth information.

David Schlegel: The size of this survey will be huge. In the first five years of operation, we will have measured the distance to more galaxies than previously measured by all other telescopes in the world combined.

How does the redshift give you the depth information?ML: We’re collecting spectra, or wavelengths of light, from galaxies. From the spectra, we get a galaxy’s redshift, the ratio of the wavelength we see, to the wavelength the light had when it left the galaxy. The light will stretch exactly the way the universe stretches. For some galaxies, we look for light that starts with a wavelength of 373 nanometers. If we then see it at 746 nanometers, we know the universe stretched by a factor of 2 while the light was making its way to us.

What kind of telescope collects this kind of spectra?DS: We’re actually retrofitting a 4-meter telescope at Kitt Peak in Arizona called the Mayall telescope. We’re adding enormous lenses that give a huge field of view. A set of 5000 optical fibers, each like the ones used for long-distance Internet connections, are used to pick off light from up to 5000 galaxies at a time.

The fibers direct light to the 30 cameras and spectrographs we have connected to the whole rig. We’ll observe these galaxies for about 20 minutes, then we will point the telescope in a new direction and 5000 little robots will rearrange these fibers to look at a new collection of up to 5000 galaxies, one fiber per galaxy. In other words, the positions of the optical fibers mimic the positions of the galaxies so that each fiber collects light from one galaxy. Point the telescope in a different direction and the fibers need to take on a new configuration.

ML: The telescope was built like a battleship in the 1970s, and one of the advantages of this venerable telescope is that it can support the weight of these instruments, which weigh as much as a school bus. This heavy equipment would overwhelm a modern telescope.

How much of the sky will DESI be able to see?ML: You can’t see through the Milky Way—its dust cuts out about a third of the sky. So it works out that from one spot on earth, you can see about one third of the sky.

DS: If we had another telescope in the southern hemisphere, we could get another third of the sky. But as it is, we’re expecting DESI to see 20 to 30 million galaxies, looking out over a distance of about 10 billion light years. The universe is 13.7 billion years old, and so at a distance of 10 billion light years, we’re looking back in time some 70 percent of the age of the universe. The map from DESI will be both much larger than any previous map and extend much further into the past.

Aside from virtual tours of our universe, what scientific purpose does a map like this have? How do we use it to understand dark energy?

ML: What we know is that dark energy, which was discovered in 1998, seems to be responsible for the present accelerating expansion of the universe. But we still don’t know what it is, and we also haven’t made very good measurements of it.

A project called BOSS started to scratch the surface of this question using spectroscopic techniques similar to DESI’s. Other imaging surveys like the Dark Energy Survey and the Large Synoptic Survey Telescope measure dark energy in a different way, by observing how matter that lies between observed galaxies and us distorts that light. All of these projects are working together to better understand what dark energy actually is.

Once we have our very large and very precise map from DESI, we can measure the distances between pairs of galaxies. These distances enable us to track the expansion of the universe.

More than that, the 3D clustering of the galaxies lets us calculate the gravitational field between them, testing how cosmic structure grew over time. It can even check whether Einstein’s theory of gravity works in both the early and late universe.

Has the universe always been expanding like it is today?DS: In the early universe, dark energy didn’t dominate like it does now and we believe that the expansion was slowing down then. But we only have one data point from that time. All the other data we have is when the universe’s expansion was speeding up, thanks to dark energy.

ML: Maybe the expansion speed comes and goes, but our data are not sufficient to tell us.

Where does DESI come in?DS: DESI helps us understand the accelerating universe through the structure of this 3D map because the features on this map—the positions and clusters of galaxies—could vary significantly as we look deeper into the universe.

For instance, the map close to us is stretched out a lot more than it should be because of this acceleration due to dark energy. And then in the early universe, when there’s not as much dark energy, it shouldn’t be as stretched out, but this is where we don’t have much data yet. Depending on when dark energy was pushing the universe apart, it will push apart different parts of the map. This data will help us eliminate a number of theories about the way dark energy works.

What’s Berkeley Lab’s role in all this?DS: We’re running the construction project. We’ve also raised the money for the large corrector optics, which are in the process of being made. We’re designing and manufacturing two-thirds of the CCD cameras used in the spectrographs. And we’re designing and building miniaturized electronics and actuators for the robotic elements that automate the positions of the fiber optics. Also, our supercomputing center, NERSC, is handling the hundreds of terabytes of data DESI will produce.

How many researchers and institutions are involved in DESI and who’s funding it?ML: The U.S. Department of Energy is expected to provide the majority of the project construction funds with additional contributions from the UK, France, Switzerland, and Spain. We have 180 collaborators from 25 institutions. DESI’s very fortunate to have donations from the Heising-Simons Foundation and the Gordon and Betty Moore Foundation, and support from the Science and Technology Facilities Council in the UK. We’re also supported by the National Optical Astronomy Observatory.

What are your next steps?DS: We’re releasing the first data from the initial 2D map of the sky that will identify the galaxies that will be the targets for our spectroscopic measurements once DESI is built. This preliminary survey contains a huge amount of data, and we’re still just getting warmed up.

In March, we passed a “CD-1 review,” an early stage “critical decision” process by the DOE’s Office of Project Assessment that tracks the progress on projects. We’ll start installation at Kitt Peak in 2017, and we’re aiming for first light by the end of 2018.

Established in 2007 by Mark Heising and Elizabeth Simons, the Heising-Simons Foundation (www.heisingsimons.org) is dedicated to advancing sustainable solutions in the environment, supporting groundbreaking research in science, and enhancing the education of children.

The Science and Technology Facilities Council (STFC) of the United Kingdom coordinates research on some of the most significant challenges facing society, such as future energy needs, monitoring and understanding climate change, and global security. It offers grants and support in particle physics, astronomy and nuclear physics, visit www.stfc.ac.uk. 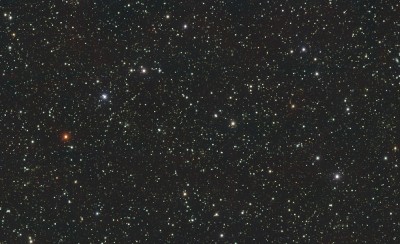 Caption: Two-dimensional map of the sky that will identify the galaxies that will be the targets for our spectroscopic measurements once DESI is built. 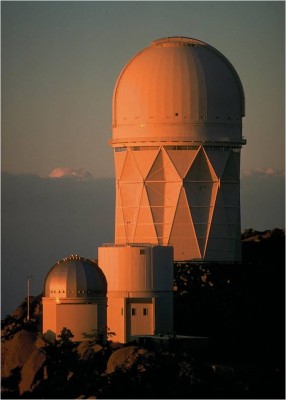 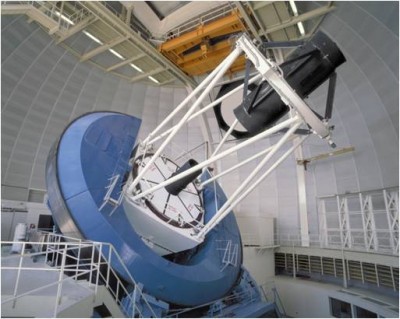 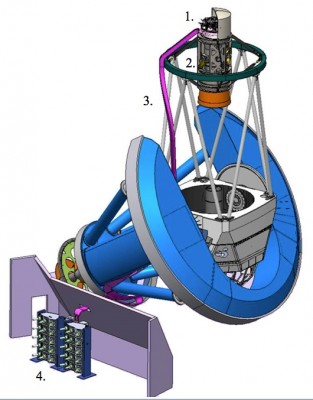