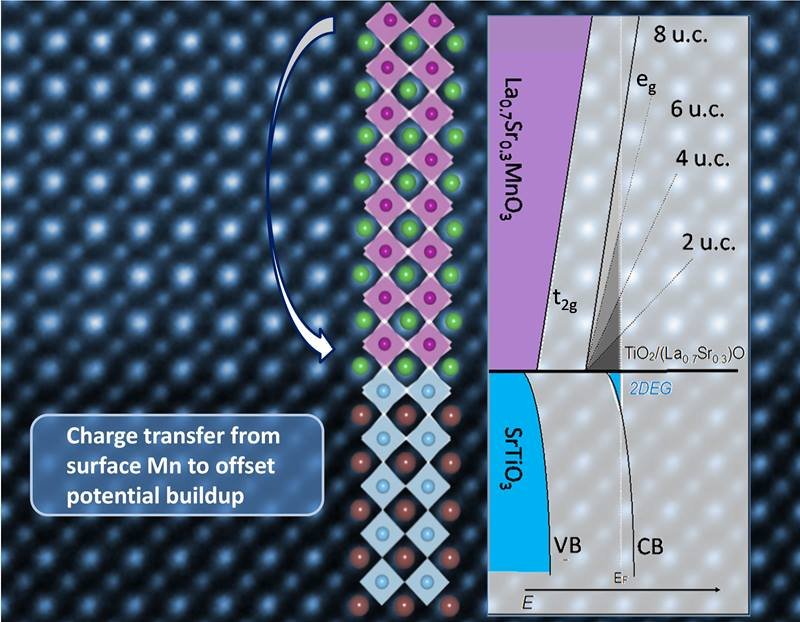 A high-resolution microscopy image shows the atomic structure of a layered electronic material. The schematic shows electrons moving from the surface of the upper layer (lanthanum strontium manganese (Mn) oxide) to the interface with the substrate.

Lanthanum strontium manganite (LSMO) is a widely applicable material, from magnetic tunnel junctions to solid oxide fuel cells. However, when it gets thin, its behavior changes for the worse. The reason why was not known. Now, using two theoretical methods, a team determined what happens. They evaluated how the number of free electrons changes as the electrons (the “charge”) migrate to the interface. They determined how the conductive layer forms. They also learned how changes in the free electrons lead to the “dead” layer, where conductivity is thwarted. This change in free electrons also strongly affects the magnetic properties, which are dependent upon the number of unpaired spins.

LSMO is widely studied. It could lead to more energy-efficient electronics and other benefits. The successful use of the material has been hampered by loss of magnetism in thin film geometries. Better understanding may identify routes to resolve challenges.

Motivated by the remarkable discovery that conductivity can be achieved at the interface between polar and non-polar insulators, scientists have been trying to uncover the underlying microscopic mechanisms responsible for this phenomena. This has been particularly challenging as buried interfaces can often be difficult to study. To surmount this issue, the researchers employed a thorough theoretical study of the electrostatic properties and electronic structure of LSMO to learn more about the origins of this behavior. The change of the manganese valence at the surface and interface has been previously noted and is known to be related to the polarization catastrophe. However, exactly what implications this phenomenon has for the electronic structure and how this effect interplays with other factors that influence the resulting dead layer, where conductivity is thwarted, is not understood. Theoretical modeling supported by experimental characterization including X-ray absorption spectroscopy established the role of the polar interface on the material properties and how they change throughout the film. Specifically, while the bulk valence of manganese was found to hover around its expected value, in thin films, large changes are observed within two atomic layers from the interface. Also observed was a more gradual variation of the valence as it approached the surface. Changes varied smoothly with thickness with the charge migrating from the surface region to the interface. These results of the layer-by-layer variation of the manganese valence explain the physics in these thin film systems. Such information may allow the enhancement and control of the interfacial properties and lead to important technological applications.

The work was supported by the Department of Energy, Office of Science, Basic Energy Sciences (theory) and use of the Advanced Light Source, an Office of Science user facility. Synchrotron and electron microscopy measurements were supported by the National Science Foundation with additional support from the West Virginia Higher Education Policy Commission and the Texas Advances Computing Center.