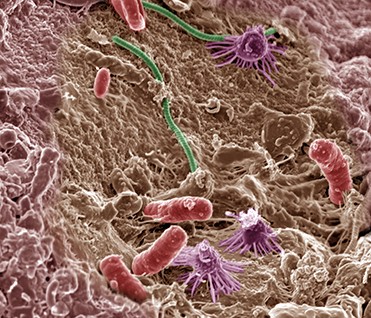 Globally, soils store enormous quantities of carbon. Microbes consume some of that carbon and exhale it as carbon dioxide. Thus, soils contribute carbon dioxide to the air. Researchers studied how moisture influences carbon dioxide releases by microbes converting dead carbon in soil to carbon dioxide. The team’s cost-effective modeling strategy is the first to investigate the effect of moisture on these climate-critical respiration rates in hard-to-simulate pores. The pores are tiny gap-like spaces between the soil particles where water and nutrients flow and microbes thrive, making them a microenvironment. The study finds that simulations must acknowledge the diversity of soil-pore spaces. Simulations must move beyond the modeling assumption that they are uniform, or homogeneous.

Moisture conditions in soil affect the respiration rate of heterotrophic microbes. A heterotrophic organism obtains its food and energy by taking in plant matter or other substances. Soils are made of sand, silt, clays, and organic matter. Within all this material, miniature “porospheres” interlock to create microbial habitats made of water and gases. Modeling heterotrophic respiration at this “pore scale” is difficult because of two factors: (1) the computational challenges of modeling fluids at this scale and (2) the microscale differences within soil. In every soil, distribution of organic carbon is highly localized and dependent on physical protection, chemical recalcitrance, pore connectivity, nonuniform microbial colonies, and local moisture content.

This study, led by researchers at Pacific Northwest National Laboratory, is the first to conduct a pore-scale investigation of how moisture-driven respiration rates are affected by soil pore structure heterogeneity, soil organic carbon bioavailability, moisture content distribution, and substrate transport. The work provides insight into the physical processes that control how soil respiration responds to changes in moisture conditions. The paper’s numerical analyses represent a cost-effective approach for investigating carbon mineralization in soils.

The simulations in this study generally confirmed that the soil respiration rate is a function of moisture content. Respiration rates increase as moisture (and therefore substrate availability) increases, and soil respiration decreases after some optimum because of oxygen limitation. The model’s results, also replicated by field research, show that respiration rates go up with higher soil porosity. Compacted soils—those with less porosity because they are unplowed and undisturbed—reduce the rate at which carbon dioxide escapes into the atmosphere. The study also warned of a danger to assuming uniform porosity in modeled soils. Instead, the researchers found that the structural diversity of soils should be modeled as it exists in nature.

Further research is needed to determine how coupled aerobic and anaerobic processes would speed up or slow down the amount of organic carbon sequestered in soil.

This research was supported by the U.S. Department of Energy (DOE), Office of Science, Office of Biological and Environmental Research through the Terrestrial Ecosystem Science (TES) program. Part of the research was performed at the Environmental Molecular Sciences Laboratory, a DOE user facility located at Pacific Northwest National Laboratory.