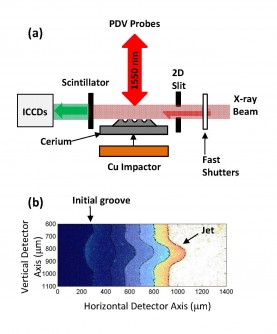 (a) X-rays from the APS interact with cerium jets and impact a scintillator which converts the X-rays to visible light, while Photonic Doppler Velocimetry (PDV) probes simultaneously measure jet-growth velocities. Four iintensified charge-coupled device (ICCD) detectors then capture the optically multiplexed images. (b) Multiple images of a jet as it crosses the field-of-view of the ICCD detectors. The groove in the back of the cerium sample is shown on the left.

Newswise — Recent synchrotron advances and the development of dynamic compression platforms have created the ability to investigate extreme states of matter on short timescales at X-ray beamlines using shock waves generated by impact systems. That’s how scientists learned that surface protrusions called “jets,” formed after shock waves passed through cerium metal, could provide insight into the yield stress of cerium in its post-shock state. Yield stress is the stress level at which a metal or other material ceases to behave elastically and, thus, becomes permanently damaged.

“Using cerium allows us to gain a fundamental understanding of a wide range of phenomena related to the multiphase properties of materials, including how strength evolves following phase transitions,” said Brian Jensen, who is a physicist and team leader in the Shock and Detonation Physics Group at the U.S. Department of Energy's (DOE) Los Alamos National Laboratory (LANL).

“Studying the formation and evolution of jets in metals and, more generally, how materials at extreme conditions respond using X-ray phase contrast imaging is relevant to such things as meteorite impacts, the performance of explosives and detonators, understanding crack nucleation and propagation in materials, and the development of new materials with tailored properties whose applications include automotive and airplane components, lighter and more impact-resistant armor, and debris shields in space, to name a few.”

Scientists from Los Alamos, Argonne National Laboratory and National Security Technologies LLC generated shock waves in cerium samples using the state-of-the-art IMPact system for ULtrafast Synchrotron Experiments (IMPULSE), which was developed specifically for use at the Advanced Photon Source (APS), a DOE Office of Science User Facility located at Argonne. IMPULSE is a gas-gun system that launches projectiles at targets placed in the path of the APS’s X-ray beam at the 32-ID beamline. Projectiles with copper impactors struck the cerium, creating shock waves inside that transformed it from the ambient γ phase into a higher pressure, higher temperature α state. Subsequently, the shock waves reflected from the back of the cerium sample, interacting with grooves that had been machined there. As the shocked cerium returned to its γ phase at a high temperature, metal jets formed and grew at the groove locations.

Because cerium is opaque to X-rays at the X-ray energies used, the researchers could obtain images of the jets as they formed. Photonic Doppler Velocimetry probes simultaneously measured jet-growth velocities. By measuring jet heights as a function of time and velocity histories for a range of impact stresses, the scientists used several methods, including computer simulation, to estimate the yield stress for cerium following its reversion to the γ phase. Good agreement was found among the calculations and the data, illustrating the sensitivity of jet formation to yield stress values.

“We are pursuing work to gain a fundamental understanding of the evolution of strength at extreme conditions,” Jensen said. “That includes work using IMPULSE at the APS, experiments to be conducted at the new Dynamic Compression Sector, also at the APS, and experiments at other national laboratories, including the Z machine at Sandia and impact and explosive loading facilities at Los Alamos. Cerium has proven to be an ideal choice for these studies because of its rich phase diagram which is supported by a large body of available high-pressure data, all of which are necessary to develop a strength-aware, multiphase equation of state.”

Ultimately, the scientists will use their ability to develop such an equation of state for cerium to study other materials including metals such as iron, which is geophysically important, explosives and novel materials that have general applicability. They are also working to couple their X-ray imaging techniques with X-ray diffraction measurements so they can examine material deformation across length scales. X-ray imaging will allow them to visibly see materials and features at the macroscopic level as they evolve during deformations, while simultaneous X-ray diffraction measurements will permit them to examine the deformations at the microscopic scale. “Correlating the microscopic and macroscopic material responses under these extreme conditions has been a long-standing scientific challenge,” Jensen said.

Jensen sees the APS Upgrade as offering great benefits to the group’s research program. “The most important benefit to us is that the upgrade will increase the spatial resolution of our images, allowing us to study these dynamic processes at smaller length scales.

The research was recently described in the Journal of Applied Physics article “Jet formation in cerium metal to examine material strength.”This work was supported by LANL’s MaRIE concept and Science Campaign Programs.

Argonne National Laboratory seeks solutions to pressing national problems in science and technology. The nation's first national laboratory, Argonne conducts leading-edge basic and applied scientific research in virtually every scientific discipline. Argonne researchers work closely with researchers from hundreds of companies, universities, and federal, state and municipal agencies to help them solve their specific problems, advance America's scientific leadership and prepare the nation for a better future. With employees from more than 60 nations, Argonne is managed by UChicago Argonne, LLC for the U.S. Department of Energy's Office of Science.The Office of Science is the single largest supporter of basic research in the physical sciences in the United States, and is working to address some of the most pressing challenges of our time. For more information, please visit science.energy.gov.