Experiments with ‘molecular anvils’ mark an important advance for mechanochemistry, which has the potential to make chemistry greener and more precise. 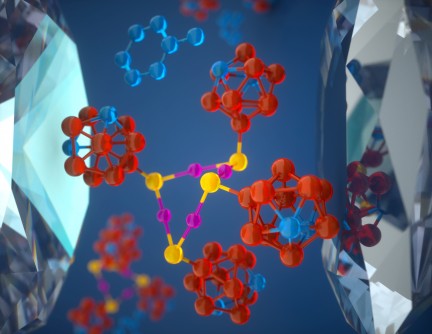 This illustration shows complexes of soft molecules (yellow and pink) attached to “molecular anvils” (red and blue) that are about to be squeezed between two diamonds in a diamond anvil cell. The molecular anvils distribute this pressure unevenly, breaking bonds and triggering other chemical reactions in the softer molecules.

An animation shows how attaching molecular anvils (gray cages) to softer molecules (red and yellow balls) distributes the pressure from a bigger diamond anvil unevenly, so chemical bonds bend and eventually break around the atom that bears the largest deformation (circled red ball). 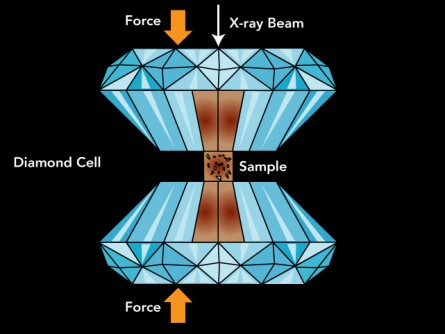 Illustration of a diamond anvil cell, where samples can be compressed to very high pressures between the flattened tips of two diamonds. 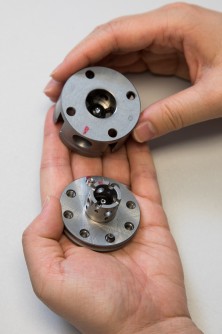 A disassembled diamond anvil cell. Each half contains a tiny diamond housed in stainless steel. Samples are placed between the diamond tips; then the cell is closed and the tips squeezed together by tightening screws. This small device can generate pressures in the gigapascal range - 10,000 times the atmospheric pressure at the Earth’s surface. 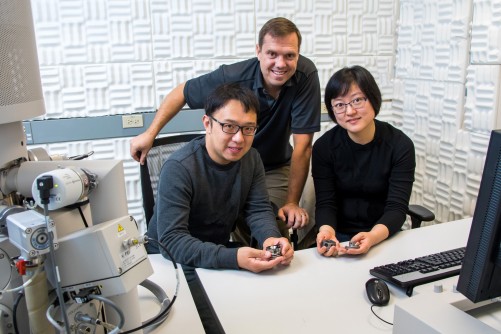 Researchers in a SIMES lab with equipment used in the molecular anvil study. From left: Hao Yan, a physical science research associate at SIMES; Nicholas Melosh, a SIMES investigator and associate professor at SLAC and Stanford; and Yu Lin, a SIMES associate staff scientist.

Newswise — Scientists have turned the smallest possible bits of diamond and other super-hard specks into “molecular anvils” that squeeze and twist molecules until chemical bonds break and atoms exchange electrons. These are the first such chemical reactions triggered by mechanical pressure alone, and researchers say the method offers a new way to do chemistry at the molecular level that is greener, more efficient and much more precise.

The research was led by scientists from the Department of Energy’s SLAC National Accelerator Laboratory and Stanford University, who reported their findings in Nature today.

“Unlike other mechanical techniques, which basically pull molecules until they break apart, we show that pressure from molecular anvils can both break chemical bonds and trigger another type of reaction where electrons move from one atom to another,” said Hao Yan, a physical science research associate at SIMES, the Stanford Institute for Materials and Energy Sciences, and one of the lead authors of the study.

“We can use molecular anvils to trigger changes at a specific point in a molecule while protecting the areas we don’t want to change,” he said, “and this creates a lot of new possibilities.”

A reaction that’s mechanically driven has the potential to produce entirely different products from the same starting ingredients than one driven the conventional way by heat, light or electrical current, said study co-author Nicholas Melosh, a SIMES investigator and associate professor at SLAC and Stanford. It’s also much more energy efficient, and because it doesn’t need heat or solvents, it should be environmentally friendly.

Putting the Squeeze on Materials with Diamonds

The experiments were carried out with a diamond anvil cell about the size of an espresso cup in the laboratory of Wendy Mao, a co-author of the paper who is an associate professor at SLAC and Stanford and an investigator at SIMES, which is a joint SLAC/Stanford institute.

Diamond anvil cells squeeze materials between the flattened tips of two diamonds and can reach tremendous pressures – over 500 gigapascals, or about one and a half times the pressure at the center of the Earth. They’re used to explore what minerals deep inside the Earth are like and how materials under pressure develop unusual properties, among other things.

These pressures are reached in a surprisingly straightforward way, by tightening screws to bring the diamonds closer together, Mao said. “Pressure is force per unit area, and we are compressing a tiny amount of sample between the tips of two small diamonds that each weigh only about a quarter of a carat,” she said, “so you only need a modest amount of force to reach high pressures.”

Since the diamonds are transparent, light can go through them and reach the sample, said Yu Lin, a SIMES associate staff scientist who led the high-pressure part of the experiment.

“We can use a lot of experimental techniques to study the reaction while the sample is compressed,” she said. “For instance, when we shine an X-ray beam into the sample, the sample responds by scattering or absorbing the light, which travels back through the diamond into a detector. Analyzing the signal from that light tells you if a reaction has occurred.”

What usually happens when you squeeze a sample is that it deforms uniformly, with all the bonds between atoms shrinking by the same amount, Melosh said.

Yet this is not always the case, he said: “If you compress a material that has both hard and soft components, such as carbon fibers embedded in epoxy, the bonds in the soft epoxy will deform a whole lot more than the ones in the carbon fiber.”

They wondered if they could harness that same principle to bend or break specific bonds in an individual molecule.

What got them thinking along those lines was a series of experiments Melosh’s team had done with diamondoids, the smallest possible bits of diamond, which are invisible to the naked eye and weigh less than a billionth of a billionth of a carat. Melosh co-directs a joint SLAC-Stanford program that isolates diamondoids from petroleum fluid and looks for ways to put them to use. In a recent study, his team had attached diamondoids to smaller, softer molecules to create Lego-like blocks that assembled themselves into the thinnest possible electrical wires, with a conducting core of sulfur and copper.

Like carbon fibers in epoxy, these building blocks contained hard and soft parts. If put into a diamond anvil, would the hard parts act as mini-anvils that squeeze and deform the soft parts in a non-uniform way?

The answer, they discovered, was yes.

For their first experiments, they used copper sulfur clusters – tiny particles consisting of eight atoms – attached to molecular anvils made of another rigid molecule called carborane. They put this combination into the diamond anvil cell and cranked up the pressure.

When the pressure got high enough, atomic bonds in the nanowire cluster broke, but that’s not all. Electrons moved from its sulfur atoms to its copper atoms and pure crystals of copper formed, which would not have occurred in conventional reactions driven by heat, the researchers said. They discovered a point of no return where this change becomes irreversible. Below that pressure point, the nanowire cluster goes back to its original state when pressure is removed.

Computational studies revealed what had happened: Pressure from the diamond anvil cell moved the molecular anvils, and they in turn squeezed chemical bonds in the cluster, compressing them at least 10 times more than their own bonds had been compressed. This compression was also uneven, Yan said, and it bent or twisted some of the nanowire cluster’s bonds in a way that caused bonds to break, electrons to move and copper crystals to form.

Other experiments, this time with diamondoids as molecular anvils, showed that small changes in the sizes and positions of the tiny anvils can make the difference between triggering a reaction or protecting part of a molecule so it doesn’t bend or react.

“This is exciting, and it opens up a whole new field,” Mao said. “From our side, we’re interested in looking at how pressure can affect a wide range of technologically interesting materials, from superconductors that transmit electricity with no loss to halide perovskites, which have a lot of potential for next-generation solar cells. Once we understand what’s possible from a very basic science point of view we can think about the more practical side.”

Going forward, the researchers also want to use this technique to look at reactions that are hard to do in conventional ways and see if compression makes them easier, Yan said.

“If we want to dream big, could compression help us turn carbon dioxide from the air into fuel, or nitrogen from the air into fertilizer?” he said. “These are some of the questions that molecular anvils will allow people to explore.” 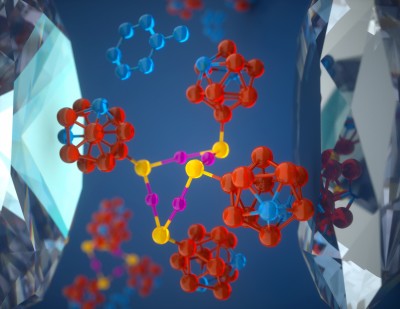 Caption: This illustration shows complexes of soft molecules (yellow and pink) attached to “molecular anvils” (red and blue) that are about to be squeezed between two diamonds in a diamond anvil cell. The molecular anvils distribute this pressure unevenly, breaking bonds and triggering other chemical reactions in the softer molecules. 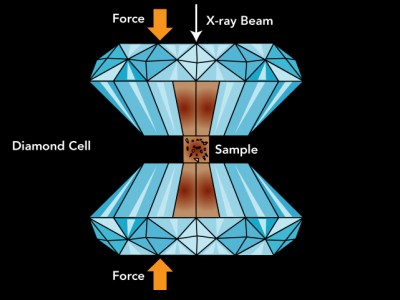 Caption: Illustration of a diamond anvil cell, where samples can be compressed to very high pressures between the flattened tips of two diamonds. 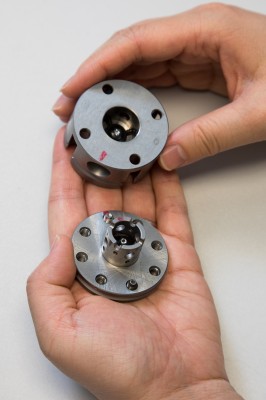 Caption: A disassembled diamond anvil cell. Each half contains a tiny diamond housed in stainless steel. Samples are placed between the diamond tips; then the cell is closed and the tips squeezed together by tightening screws. This small device can generate pressures in the gigapascal range - 10,000 times the atmospheric pressure at the Earth’s surface. 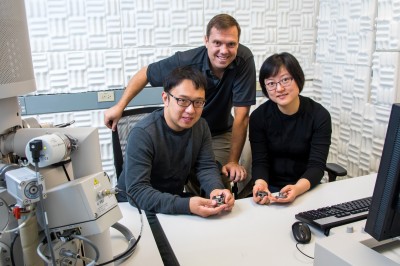 Caption: Researchers in a SIMES lab with equipment used in the molecular anvil study. From left: Hao Yan, a physical science research associate at SIMES; Nicholas Melosh, a SIMES investigator and associate professor at SLAC and Stanford; and Yu Lin, a SIMES associate staff scientist.