Scientists discover a direct electron-transfer process with a higher efficiency for charge separation than previous mechanisms. 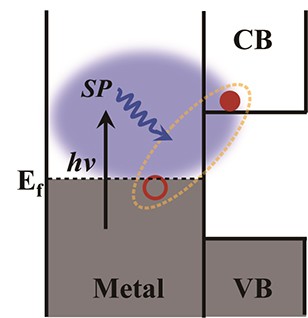 The decay of surface plasmon, shown above as an oscillating arrow, induces an electron-hole pair, with the hole residing within the metal (hollow red circle) and the electron residing in the conduction band (filled red circle). This electron-hole pair location is the key to a more efficient path for generating electricity using light.

Solar panels could be more efficient at turning sunlight into electricity. Some efforts to improve the efficiency have focused on surface plasmons, light waves trapped on a metal surface, but the plasmon-induced processes did not prove to be highly efficient. Recently, researchers at Emory University discovered that plasmon induced hot electron transfer could take a more efficient route. The new path, called plasmon-induced interfacial charge-transfer transition, or PICTT for short, takes less steps than the conventional route and is more efficient at using light to create electricity.

This new route presents an opportunity to greatly increase the efficiencies of solar conversion devices.

Developing methods and technology to harness sunlight for energy is one of the most important tasks of researchers at the forefront of the energy frontier. Most difficult is the ability to convert sunlight efficiently, with many devices too poor in this area for practical use. Previous attempts at solar energy devices have used surface plasmon, light waves trapped on a metal surface, as a mechanism for converting light to energy. However, all plasmon-induced processes were thought to occur through a conventional pathway that suffered from typical low efficiency. In the conventional pathway (called plasmon-induced hot-electron transfer, PHET) the generation of a plasmon-induced hot electron-hole pair occurs in a metal. The hot-electron then transfers to the conduction band of an adjacent semiconductor to complete the mechanism. Recently, researchers at Emory University have discovered another plasmon-induced mechanism. The new mechanism (called plasmon-induced interfacial charge-transfer transition, PICTT) involves direct creation of an electron in the semiconductor conduction band and a hole in the metal, effectively bypassing the initial hot electron-hole pair in the metal and subsequent transfer step. This mechanism was confirmed using cadmium selenium semiconductor nanorods capped with a gold metal tip. The nanoparticles that exhibited the PICTT mechanism provided greatly improved efficiency, thus helping to alleviate one of the faults of PHET devices. Additionally, these nanorods maintained their efficiency independent of the excitation photon energy over a 1-eV range, which gives them more utility than nanoparticles employing the PHET mechanism. The newly discovered PICTT mechanism can hopefully be used to fabricate more efficient sunlight conversion devices, thus furthering the practical uses of solar energy.