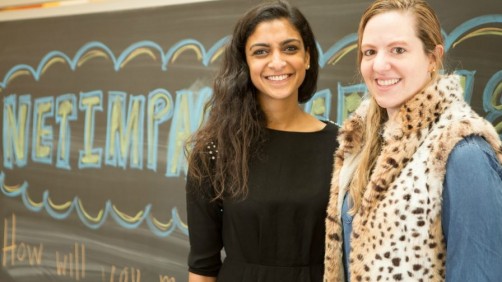 The student-run Net Impact Week featured events and panels on topics like humanitarian aid and clean energy, among other subjects. 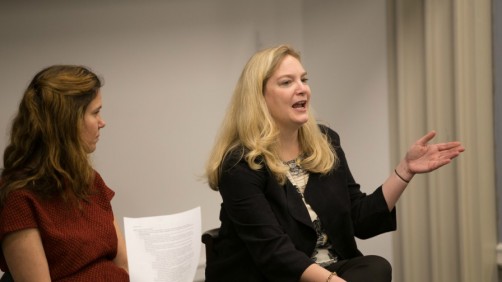 Sarah Glass (MBA '08) was among the panelists at Net Impact Week, which including panels on clean energy, financial inclusion and access to education, innovation in humanitarian aid and making an impact in a post-MBA career, among other events. 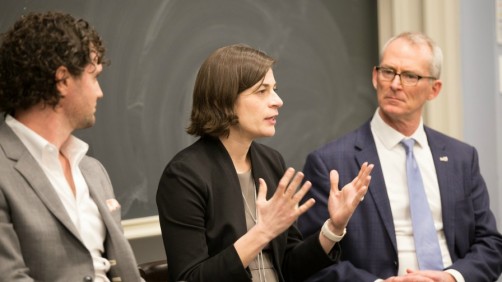 Chrissa Pagitsas (MBA '09) was among the panelists at Net Impact Week. 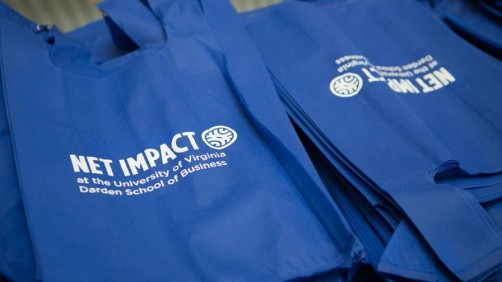 Net Impact Week included panels on clean energy, financial inclusion and access to education, innovation in humanitarian aid and making an impact in a post-MBA career, among other events.

Newswise — The energy sector appears ripe for the sort of disruption that has upended scores of traditional industries, although entrenched interests and incumbents are clinging to traditional sources and models.

That insight came during a clean energy panel discussion at the University of Virginia Darden School of Business student-run Net Impact Week, where three executives on the front lines of the rapidly changing energy sector suggested the opportunities in their industry were wide open for those willing.

Devin Welch, vice president of business development at the solar energy company Sun Tribe Solar, said the growth of the solar industry in recent years was driven by “the technology story and the cost story,” with solar capabilities becoming both more effective and cheaper.

“We have beaten all predicted cost curves,” Welch said. “Solar has become the cheapest form of energy on earth ever.”

Welch likened the pace of advancement of solar technology to that of semiconductors in the 1990s, and said expanding solar deployment would eventually lead to a wholesale rethinking of the energy markets of the future.

Chrissa Pagitsas (MBA ’09), director of the Green Financing business at Fannie Mae, discussed her work incorporating sustainability principles and practices into both housing and financial markets, where she has grown her service line into a $32 billion market from scratch, making Fannie Mae the largest issuer of green bonds in the world in 2017.

The Fannie Mae work involves loans to incentivize homeowners and builders to include energy- and water-reducing technologies, with the incentives made possible by securitizing and selling the green bonds in financial markets.

“We’re trying to get the ultimate customer — that bond investor,” Pagitsas said. “They are a critical part of the capital chain and we offer supply for the investor to have a green impact.”

Former U.S. Congressman Bob Inglis, now the executive director of republicEN, which seeks to fight climate change through free enterprise principles, advocated for a world free of fuel subsidies in which fuels like coal would have to stand on their merits and costs against other forms of power generation in the marketplace.

Inglis said it was either “dumb or duplicitous” for politicians to travel to coal country and promise a return of coal jobs while also traveling to Texas “and saying ‘frack on.’

“The price of natural gas is what’s killing coal,” Inglis said. “It’s changed all the economics of power generation.”

While elements of the solar industry benefit from subsidies, Welch said the industry is weaning itself from government assistance. He also predicted that recent tariffs on imported solar panels would not be as damaging as many have feared.

More important than subsidies for the long-term viability of the industry will be regulatory and structural changes to current energy infrastructure.

“We’re talking about moving decades worth of regulations to accommodate new opportunity, which is a significant undertaking,” Welch said. “The big hurdles are regulatory.”

The panel was moderated by Darden Professor Mike Lenox, author of the forthcoming Can Business Save the Earth?: Innovating Our Way to Sustainability.

Net Impact Week, which was sponsored by Darden’s Net Impact club and a host of organizations across Grounds, also included panels on financial inclusion and access to education, innovation in humanitarian aid, and making an impact in a post-MBA career, among other events.

At a discussion dedicated to innovation in humanitarian aid, panelists working at the forefront of the field discussed the occasionally uneasy but increasingly critical relationship between the private sector and traditional humanitarian work and the difficulty of bringing innovation to bear in their field.

Kirsten Gelsdorf, director of global humanitarian policy at UVA’s Frank Batten School of Leadership and Public Policy, said the sector now operates in a world in which needs that were once considered emergency are now protracted, with short-term thinking and solutions no longer applicable.

Given the seemingly permanent crises around the globe and perpetual lack of adequate funding and supplies, Gelsdorf, the former chief of policy and innovation at the United Nations Office for the Coordination of Humanitarian Aid, said the need to find new methods of working and new forms of partnerships were essential.

Sarah Glass (MBA ’08), the director of special partnerships at the U.S. Global Development Lab at the United States Agency for International Development (USAID), said the private sector is an increasingly important part of aid work, even if the models and best practices are still being worked out.

Glass said her division of USAID works with businesses to show the “real markets and opportunities” that can be involved in international development work. She noted a recent case of working with Google on communications investment in Liberia.

USAID works with a company like Google on public-private partnerships that involve some de-risking of Google’s investment, but which would be unlikely to move forward without the infusion of private capital.

“Our job in the public sector in terms of innovation is to seek as many ideas from as many places as we can and then get to the best ideas that can show evidence,” Glass said. “We’re tackling intractable problems that don’t have clear answers — we have to continue to innovate.”

Darden graduates on either side of the divide could be important translators or bridge builders in their career, Gelsdorf said.

It was a point echoed by Glass, who worked at Accenture after Darden before moving to USAID.

“Please, in your job, look at where there are places you can make a social impact but the risk is too high or maybe the return is not strong enough, and then reach out,” Glass said. “We can talk about possible ways to mitigate the barriers.” 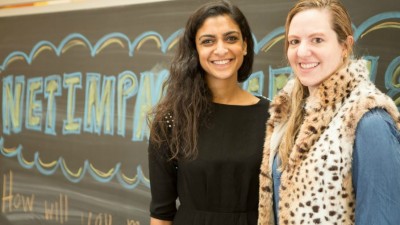 Caption: The student-run Net Impact Week featured events and panels on topics like humanitarian aid and clean energy, among other subjects. 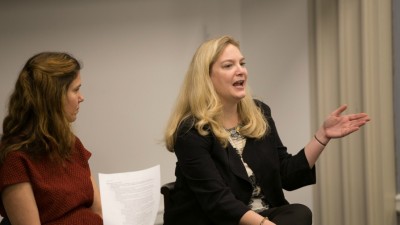 Caption: Sarah Glass (MBA '08) was among the panelists at Net Impact Week, which including panels on clean energy, financial inclusion and access to education, innovation in humanitarian aid and making an impact in a post-MBA career, among other events. 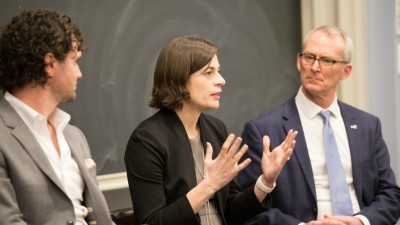 Caption: Chrissa Pagitsas (MBA '09) was among the panelists at Net Impact Week. 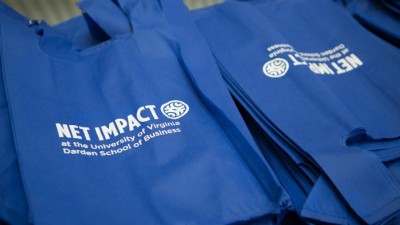 Caption: Net Impact Week included panels on clean energy, financial inclusion and access to education, innovation in humanitarian aid and making an impact in a post-MBA career, among other events.