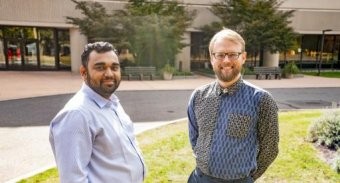 Newswise — Discoveries about the behavior of plasma that fuels fusion reactions and composes the sun and stars have won prestigious awards for two post-doctoral fellows at the U.S. Department of Energy’s (DOE) Princeton Plasma Physics Laboratory (PPPL). The honors, the 2019 Christiaan Huygens Science Award for physicist Chris Smiet and the 2019 Under 30 Scientist and Student Award for physicist Rupak Mukherjee, recognize exceptional contributions by the two scientists at the start of their careers.

Honoring Smiet for the most innovative thesis in physics in the past three years in the Netherlands is the Christiaan Huygens Foundation, whose awards “encourage innovative research in the disciplines in which Christiaan Huygens excelled.” The U30 award for Mukherjee, given by the Association of Asia-Pacific Physical Societies-Division of Plasma Physics (AAPPS-DPP), honored a paper that demonstrates “outstanding scientific quality and achievement in the area of plasma physics.” A look at the two winners:

Chris Smiet
His dissertation, written as a Ph.D. candidate at Leiden University in the Netherlands, was about knots in plasma, the soup of electrons and atomic nuclei that scientists hope to harness to create a limitless source of energy to produce electricity. The work uncovered a mathematical structure inherent in plasmas of all sizes — from vast conglomerations thousands of light years across to the plasma within fusion facilities on Earth that measure a few meters in diameter.

“I studied, in a fundamental way, what happens to the linking and twisting of magnetic field lines when they start out as knotted, and I showed that they almost universally take on the characteristics of a very beautiful mathematical structure,” Smiet said. “Understanding these self-stable structures could show us a new way to keep fusion plasma in its place and possibly a whole new way of constructing a fusion device.”

Smiet joined PPPL in 2017 and investigates self-organized plasma structures under the supervision of physicist Stuart Hudson, deputy director of the PPPL Theory Department. “It comes as no surprise that Chris has won this prestigious award,” said Hudson. “His research has opened up new ways of looking at old problems.”

Smiet received his award, which includes a cash prize of 10,000 euros (about $11,000) and a bronze statuette of Huygens, in the Netherlands on Oct. 7. “I’m very happy that my work’s applications and relevancy are being recognized,” he said.

Rupak Mukherjee
His award-winning paper, published and selected as an Editor’s Pick in the journal “Physics of Plasmas,” describes the evolution of non-linear plasma flows. The research predicts the “good” flows that recur and the “bad” flows that do not. “If we know which flows recur and can experimentally identify those flows, we may predict the short-term future of the system,” Mukhurjee said. “This might help predict disruptions in magnetically confined fusion
devices or extreme events in astrophysical plasmas, as for example in the Sun.”

Mukherjee joined PPPL in June and has been developing numerical simulation codes for plasma research under physicists Greg Hammett and Ammar Hakim. “Rupak's Under 30 award is well- deserved,” said Hammett. “His thesis work, and the main paper he wrote that led to this award, is an insightful study of fascinating complex plasma dynamics. His work demonstrated an ability to think deeply about complex plasma problems, along with solid computational skills.”

Mukherjee first grew interested in plasma physics when he encountered it as a university student in India. “I started studying it in graduate school and became inspired when I got into a discussion with Prof Abhijit Sen, who chaired my thesis committee,” he said. “In addition, my thesis supervisor, Prof Rajaraman Ganesh, motivated me in numerical simulations and I ended up developing my own code from scratch. I have come to love general codes for astrophysical use.”

Mukherjee expressed gratitude for the Under 30 honor, which includes a $300 cash award and a certificate and citation to be presented at the AAPPS-DPP Conference in Hefei, China, in November. During the conference he will present his numerical work in a talk to a session chaired by Prof. Zensho Yoshida of the University of Tokyo, whose work Mukherjee has built upon. Yoshida “did purely analytical pioneering work in the field,” he said. “Starting from his prescriptions, I discovered a new fundamental property of fusion plasmas through a direct numerical simulation study.”