Investigating the Benefits of Cooperation 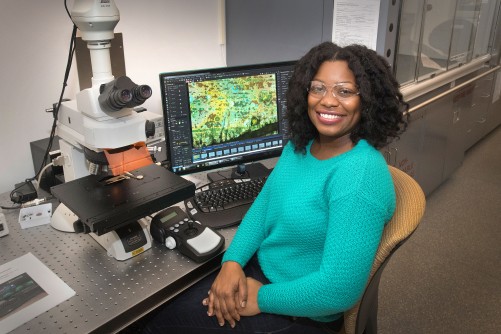 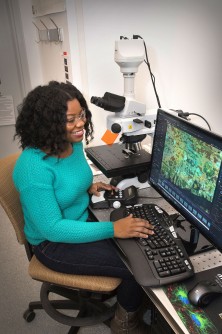 Newswise — Tiny strands of fungi weave through the roots of an estimated nine out of 10 plants on Earth, an underground symbiosis in which the plant gives the fungus pre-made sugars and the fungus sends the plant basic nutrients in return. Scientists are interested in enhancing this mechanism as a way to help plants grow on nutrient-poor lands. Their success could lead to increased production of plant-based biofuels without having to compete with food crops for fertile farmland.

“When fungus grows within the plant’s root system, it produces hair-like extensions all throughout the soil. These are thinner than the root hairs so they’re able to diffuse nutrients a lot quicker, and they’re a lot longer so they can cover a much bigger area to scavenge nutrients for the plant,” said Tiffany Victor, a PhD student from Stony Brook University who works in biophysicist Lisa Miller’s group.

Working with Miller as well as collaborator Leland Cseke of the University of Alabama, Huntsville, Victor researches this mutually beneficial association of plants and fungi at the U.S. Department of Energy’s (DOE) Brookhaven National Laboratory, where Miller is the Program Manager for Microscopy and Imaging at the National Synchrotron Light Source II (NSLS-II), a DOE Office of Science User Facility.

“We use an infrared microscope to follow the distribution of nutrients such as nitrogen and carbon within the plant’s rhizosphere, which is the section of soil closest to the plants roots, to try to understand how the fungus actually changes this nutrient distribution to facilitate the plant’s growth,” Victor explained.

Rather than digging up and examining roots in the forest, Victor studies small poplar seedlings that Cseke grows in a highly controlled environment.

“His lab grows the seedlings in a nutrient gel on a glass slide,” Victor said. “They control the concentration of the nutrients that go in, the fungus that goes in, the bacteria and microorganisms. It’s a tiny ecosystem on a glass slide.”

By examining these slides under an infrared microscope at Brookhaven, Victor can map out the concentration of various nutrients near the plant’s roots, where the fungus resides. To fully understand how fungi affect these concentrations she tests different mixtures of fungus and bacteria, different levels of nutrients, and varied nutrient types.

Victor also flies to California several times a year to use infrared beams at Lawrence Berkeley National Lab’s Advanced Light Source (ALS)— also a DOE Office of Science User Facility—for her work. Unlike the microscope at Brookhaven, the extremely bright infrared light from a synchrotron beamline improves the image quality and resolution in order to study the interface between the plant and fungus.

“We are looking forward to having our own synchrotron infrared microscope at NSLS-II at Brookhaven in 2018, when the first infrared beamline at the facility will come online,” Miller said.

One goal of Victor’s research is “to build a quantitative model of the rhizosphere that I can use to find exact concentrations of nitrate and ammonium and the sugar that’s available—and then correlate that with what’s going on in the plant-fungi system,” she said.

Her larger objective is to isolate the proteins that carry nutrients such as nitrate across cell membranes. Understanding the proteins’ structure and how they work could someday help scientists enhance this fungus-assisted nutrient uptake, and grow plants for biofuels on land where they won’t interfere with other crops.

“I’ve always been interested in environmental chemistry. We have a pretty big chemistry department at Stony Brook, but I’m the only one in my program who works on plants,” Victor said. Like the symbiotic association of plants and fungi, this cross-disciplinary work has benefits for both fields—and perhaps will someday benefit us all.

Victor’s work is supported by the DOE Office of Science. 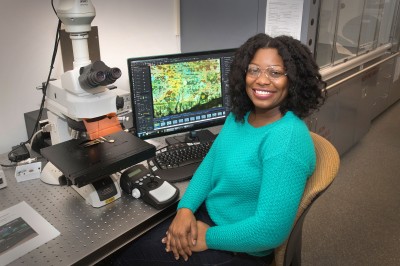 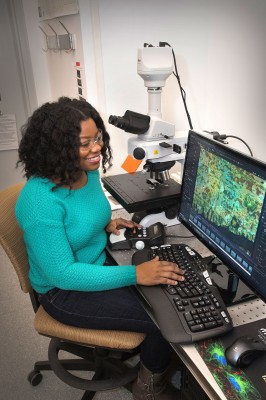