Bombarding a material with high-energy charged atoms heals, rather than damages, the atomic structure, which could lead to longer-lasting components for extreme environments. 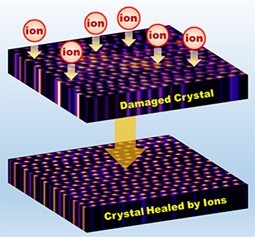 Bombarding a damaged material with high-energy charged atoms called ions can heal the pre-existing defects—breakdown in the atomic order of a crystal—rather than create more defects. In the projected electron microscopy images, the previously damaged crystal (smeared spots in top slab) is bombarded with high-energy ions. Surprisingly, this process restores structural order (ordered bright spots in bottom slab) by local heating, a process called annealing. Self-healing from the transfer of the ion’s energy to electrons in the damaged material could lead to longer-lasting components for use in extreme environments, such as nuclear power plants.

Normally when materials are bombarded with energetic particles, the materials are damaged. The damage occurs at the atomic scale and degrades material properties. Surprisingly, pre-existing material defects were healed by exposure to a beam of highly energized charged atoms, called ions. The high-energy ions actually transferred energy to the material in a way that caused localized heating. The heating promoted healing.

This healing mechanism could let scientists tailor conditions and materials to repair the damage caused by radiation exposure. For nuclear reactors and space environments, this would increase the lifetimes of materials. This finding is also promising for electronics manufacturing. The work could heal defects created by implantation doping during fabrication of advanced electronic materials.

Typically, exposure of a material to energetic particles, such as ions or neutrons, creates many defects that result in damage to the structure. Damage occurs when the incoming ion penetrates into the material, knocking its atoms out of position in the crystal structure. However, in this study, researchers found that high-energy ions did not damage the material; rather, they repaired pre-existing defects in the atomic structure. Investigating this non-intuitive healing process, scientists at Oak Ridge National Laboratory and the University of Tennessee discovered that the high-energy ions locally heated the material and thermally repaired and restored order to silicon carbide, a high-temperature semiconductor. This material is a key structural and electronic material used in extreme radiation environments. The exposure of silicon carbide to the high-energy ions caused local heating along the ion path that resulted in a significant reduction in the structural disorder at the microscopic and atomic scales. Experimentation and atomistic simulations revealed that incoming high-energy ions lost energy not by hitting the atoms themselves (like what happens at lower energies). Instead, energy of the ions was transferred to the electrons in the atomic structure. This energy transfer created a local, high-temperature region along the path of the ion. The healing process, which is thermally activated, could lead to in-operando repair of radiation damage of silicon carbide components in nuclear and space applications. Further, the fundamental understanding of this energy transfer could allow for better prediction of materials performance after exposure to high-energy ions used in manufacturing of electronic devices and engineered nanostructures.

This work was supported by the U.S. Department of Energy (DOE) Office of Science, Office of Basic Energy Sciences and used resources of the National Energy Research Scientific Computing Center, a DOE Office of Science user facility at Lawrence Berkeley National Laboratory.