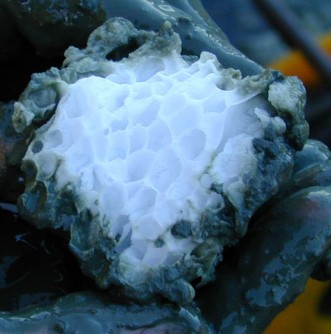 Structure of a gas hydrate (methane clathrate) block embedded in the sediment of hydrate ridge, off the coast of Oregon. The gas hydrates have been found during a research cruise with the German research ship FS SONNE in the subduction zone at a depth of about 1200 meters in the upper meter of the sediment.

Coastal wetlands and ocean sediments are home to unique microbial communities that convert the more potent greenhouse gas methane into carbon dioxide even in the absence of oxygen, which does not penetrate below the top few centimeters of sediment. To thrive, certain microbes work together using a process called anaerobic oxidation of methane. This process converts up to 90% of available methane to carbon dioxide in certain environments. Researchers uncovered new evidence showing that higher levels of iron oxides in sediment speed the conversion process.

Determining the mechanistic basis for the anaerobic oxidation of methane partnership will increase understanding of the global carbon cycle and potential climate change impacts. Revealing new biological linkages in the cycling of carbon, sulfur, and iron, these findings will have important implications in predicting the contribution of anaerobic oxidation of methane processes to the global carbon cycle.

Coastal wetland and ocean sediment environments contain unique microbial communities capable of converting methane (CH4) to carbon dioxide (CO2) even in the absence of oxygen. No individual microbe or microbial species can generate enough energy to survive by converting CH4 to CO2 in the absence of oxygen. However, symbiotic partnerships between CH4-consuming archaea and sulfate (SO4)-reducing bacteria thrive using a collaborative metabolism called anaerobic oxidation of methane (AOM). In this growth mode, electrons freed during oxidation of CH4 by archaea are transferred to SO4 by the bacterial partner, generating energy for both organisms. Researchers at the California Institute of Technology and partner institutions in the United Kingdom and Israel have uncovered new evidence of a significant role for iron minerals in accelerating the rates of AOM processes. Sediments with higher levels of iron oxides had decreased rates of CH4 release and increases in AOM processes. The team used a series of microcosm experiments and tracked the conversion of isotopically labeled CH4 and SO4 in the presence of varying concentrations of the iron mineral hematite. The results showed that the presence of iron oxides stimulated bacterial SO4 reduction, facilitating recycling of reduced sulfur compounds back to SO4 and driving increased rates of archaeal CH4 consumption. These findings reveal new biological linkages in the biogeochemical cycling of carbon, sulfur, and iron.