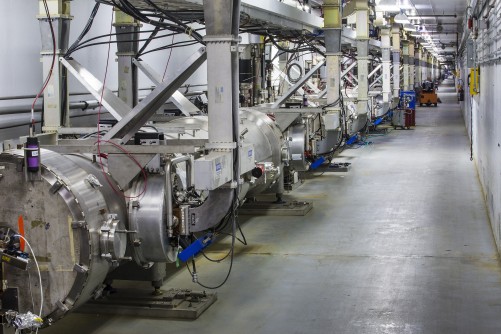 Recently, the CEBAF accelerator delivered electron beams into two of its experimental halls, Halls B and C, at energies not possible before the upgrade for commissioning of the experimental equipment currently in each hall. Data were recorded in each hall, which were then confirmed to be of sufficient quality to allow for particle identification, a primary indicator of good detector operation.

“These commissioning runs have demonstrated that the installed equipment is operating as designed, ready to support the eagerly awaited research program," said Allison Lung, project director for the 12 GeV CEBAF Upgrade project and Jefferson Lab Chief Planning Officer. “These successful performance demonstrations were made possible by the expertise and dedication of the Jefferson Lab staff, facility users and others who have worked diligently toward these accomplishments.”

CEBAF is the world's most advanced particle accelerator for investigating the quark structure of the atom's nucleus. The CEBAF accelerator is based on superconducting radiofrequency (SRF) technology and produces a stream of electrons for experiments. It was originally designed to provide electrons at energies of 4 billion electron-volts, or 4 GeV, although efficiencies in its design and extensive experience in running the machine allowed Jefferson Lab operators to eventually achieve 6 GeV electron beams in its original configuration.

The 12 GeV CEBAF Upgrade is a $338 million, multi-year project to triple CEBAF's original operational energy. Parts of the project have already been completed. Previously, the CEBAF accelerator had delivered beam to two of its four halls, Halls A and D, in the spring of 2014. In December 2015, the accelerator delivered full-energy 12 GeV electrons to Hall D.

The commissioning run for Hall B was conducted Feb. 3-4, and the run for CEBAF’s final experimental area to receive upgrade-energy beam, Hall C, was held March 9. Successful completion of these milestones was then verified by the Department of Energy.

Obtaining these milestones marks progress toward the final DOE approval step that will signal completion of the project, Critical Decision-4B (Experimental Equipment Project Completion and Start of Operations). A review of the project will be held later this spring to assess project status and determine the laboratory’s progress on the final steps needed for project completion.

Once the upgrade is complete, CEBAF will transition to its primary mission of enabling studies in nuclear physics of the building blocks of our visible universe. CEBAF will deliver up to 11 GeV electrons into its original experimental areas, Halls A, B and C. The full-energy, 12 GeV electrons will be delivered to the Hall D complex to initiate studies of the strong force, which glues matter together. Other major experimental thrusts for the upgraded CEBAF include research that will enable the first snapshots of the 3D structure of protons and neutrons, detailed explorations of the internal dynamics and structure of protons and neutrons and tests of fundamental theories of matter.“With the upgraded CEBAF, physicists have an unprecedented tool for studying the most basic particles and forces that build up matter,” Lung said. “This kind of science explores the most fundamental mysteries.”-end-