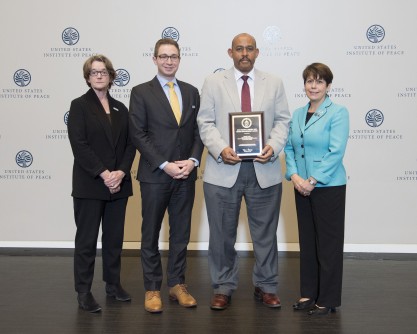 Newswise — NEWPORT NEWS, VA – On Oct. 23, a team from the Department of Energy's Thomas Jefferson National Accelerator Facility was honored at the 2018 Federal Energy and Water Management Award Ceremony for upgrades made to the lab’s data center, ultimately improving its energy efficiency. The Federal Energy and Water Management Awards are presented annually by DOE to recognize individuals, groups, and agencies for outstanding contributions in the areas of energy efficiency, water conservation, and the use of advanced and renewable energy technologies at federal facilities.

Carroll Jones, Facilities Division, and Allison Lung, Chief Planning Officer, attended the event held in Washington, D.C., with Jones accepting the award on behalf of the team. Each member of the team received a plaque commemorating the award.