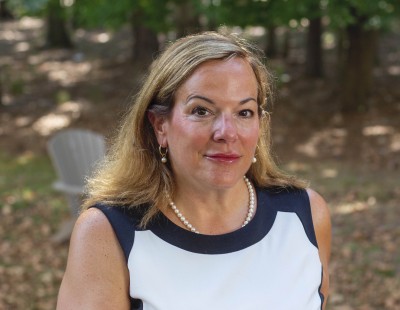 Cynthia Keppel, leader of Jefferson Lab’s Halls A&C, has been honored with the APS 2019 Distinguished Lectureship Award on the Applications of Physics.

Newswise — NEWPORT NEWS, VA – There are few scientists who straddle the line between basic research and real-world clinical applications as gracefully as Cynthia Keppel. There are even fewer who then take the time to carefully and clearly explain their work to non-expert audiences. Now, Keppel’s expertise in the trifecta of basic research, applied research and public outreach has earned her the American Physical Society’s 2019 Distinguished Lectureship Award on the Applications of Physics.

“I can't think of a more deserving recipient for this award. Cynthia has had an enormous impact making use of nuclear physics technology to help save lives. At the same time, she has an amazing ability to communicate the excitement and importance of this work to a variety of audiences,” said Jefferson Lab Director Stuart Henderson.

As group leader of two experimental halls at the U.S. Department of Energy's Thomas Jefferson National Accelerator Facility, Keppel orchestrates the work of hundreds of Ph.D. physicists, engineers and technicians to ensure that cutting-edge experiments probing the detailed structure of the nucleus of the atom run smoothly.

Her focus also extends beyond the realm of basic research. Throughout her career, Keppel has sought ways to apply the technologies and techniques of nuclear physics research to other problems. She currently holds more than a dozen patents aimed at using these tools and techniques to provide better treatments for cancer patients.

In honoring Keppel with the distinguished lectureship, the APS Forum on Industrial and Applied Physics and the Committee on Careers and Professional Development cited her “pioneering work in proton therapy and for the promotion of the applications of physics to both experts and non-experts."

“It's quite exciting to be chosen for the lectureship award. Both the forum and the committee highlight outreach activities for nuclear physics, in one case the symbiotic relationship between fundamental and applied research and in the other case sharing an enthusiasm for this with students and the general public,” said Keppel. “I am looking forward to the lectures this year, and am very grateful for this opportunity.”

According to the APS, the award is given to physicists in industrial and other non-academic careers for their significant contributions to the advancement of physics of a technical, industrial or entrepreneurial nature and for their demonstrated ability to give interesting and engaging lectures to both experts and non-experts.