The OARtrac® system, built with detector technologies used in nuclear physics, has been cited as a 2018 R&D 100 Award Winner by R&D Magazine. 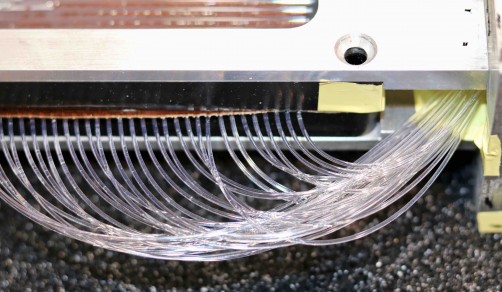 The OARtrac® system includes a novel application of scintillating fiber material, such as the fibers installed in a detector system shown here. In nuclear physics, scintillating material is routinely used to help identify the particles that are produced in experiments.

Newswise — The OARtrac® system, built by RadiaDyne and including technologies developed by scientists at the U.S. Department of Energy's Thomas Jefferson National Accelerator Facility, has been awarded a 2018 R&D 100 Award by R&D Magazine.

The OARtrac® radiation treatment monitoring system is designed to allow clinicians to not only monitor, but also adjust the radiation delivered to patients, so that they receive the amount as specified for a given location in their treatment plan. It includes a novel application of scintillating fiber material. In nuclear physics, scintillating material is routinely used to help identify the particles that are produced in experiments.

According to the R&D magazine website, the R&D 100 Awards have served as the most prestigious innovations awards program in research and development for the past 56 years, honoring pioneers in science and technology. The 2018 winners were selected by an independent panel of more than 50 judges representing R&D leaders in a variety of fields. The awards were announced at the R&D 100 Conference on Nov. 16.