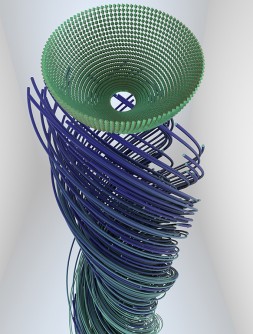 Electrons have distinct energy levels where the energy is minimized, similar to a ball rolling down a mountain to a valley. In the artistically enhanced depiction, a valley in the electronic structure interacts with and is controllably manipulated by circularly polarized laser light. The laser causes valleys with initially equal energies to have slightly different energies. This is the first time a laser has separated energy valleys in an atomically thin semiconductor (tungsten disulfide), which could lead to advanced electronics based on energy valley states instead of conventional electronics based on charge flows and accumulation.

A new semiconducting material that is only three atomic-layers thick has emerged with more exotic, malleable electronic properties than those of traditional semiconductors. These properties come from electrons, like a ball rolling down a hill to a valley, that prefer the lower energy levels at the bottom of electronic energy “valleys.” Now, the valley depth can be shifted optically and with extreme speed with sculpted laser pulses.

A new ultra-thin semiconducting material (tungsten disulfide or WS2) consists of three atomic layers in an “atomic sandwich” configuration with a heavy metal tungsten atom layer between lighter element sulfur atom layers. The material is quasi-two dimensional, just three atoms thick, and exhibits a unique electronic structure with subtle differences depending on the direction relative to the repeating atomic bonds in the layer plane. The differences create two distinct but similar valleys in the electronic structure, where electrons can accumulate with different directions, but with associated energy levels and gaps that are equal. Adding a specific type of laser beam, where the polarization direction (the direction of interacting electric forces) rotates as the light propagates, creates a new type of electron energy structure that can be probed and manipulated. The electron structural landscape, which began with two similar valleys, can also be made to have different distinct valleys with different energy depths. The valley depth can now be manipulated with light to encode information like zeroes and ones for conventional data. Additionally, changing the energy of the valleys with light allows for fast manipulation without the need for contact with complex electrodes as in conventional electronics.

This work was supported by the U.S. Department of Energy, Office of Science, Office of Basic Energy Sciences (optical laser experiments and data analysis); the National Science Foundation (material growth, initial characterization, and theoretical interpretation); and the Ministry of Science and Technology of the Republic of China.Publications