Leah Broussard: Breaking the Standard Model to Fix Understanding of the Universe 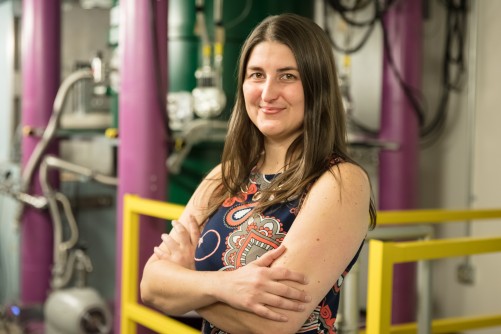 Leah Broussard leads a study of neutron decay to understand correlations between electrons and antineutrinos as well as subtle distortions in the electron energy spectrum. The physicist, who hails from Louisiana, influenced the color scheme of the experiment’s newly installed instrument to reflect her home state’s biggest celebration—its spectrometer sports Mardi Gras green on the magnet, purple on the shielding, and gold inside the magnet and on safety bars. 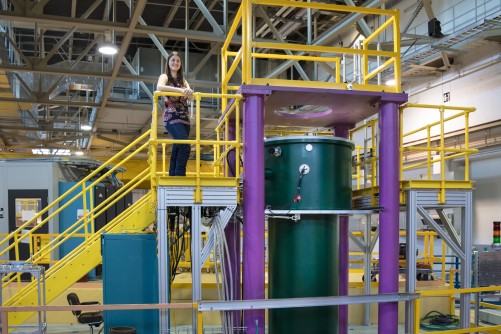 Broussard will use the approximately 23-foot-tall Nab spectrometer (green) to perform some of the most precise measurements in neutron beta decay yet.

Newswise — Leah Broussard, a physicist at the Department of Energy’s Oak Ridge National Laboratory, has so much fun exploring the neutron that she alternates between calling it her “laboratory” and “playground” for understanding the universe.

“The neutron is special,” she said of the subatomic particle that, along with the proton and the electron, forms the atom. “It’s electrically neutral, and that makes it a really nice system to use to look at the weak force.”

Neutrons can help identify where the Standard Model “breaks.” Some of Broussard’s experiments amount to “crash tests” that push physics to its limits to see what in the model is missing or wrong.

From sugarcane to science

While she could have kept her career options open, she always knew she wanted to be a scientist. “I was always curious and methodical in understanding how things work,” she recalled. “I picked physics for kind of silly reasons. I wanted to know what the hardest thing was that I could do, and someone told me physics, so that’s what I determined to do. Growing older, you sort of put away the childish things, but I realized that physics is fun because it is hard, because I don’t always understand it.”

Broussard triple-majored in computer science, math and physics, earning a bachelor’s degree from Tulane University in 2004. As an upperclassman, she had participated in a research project at the National Institute of Standards and Technology in Gaithersburg, Maryland, for her first neutron experiment. “I was hooked,” she said.

Later, as a graduate student in physics at Duke University, Broussard visited a cyclotron facility in the Netherlands to make very pure beams of neon-19 and built a tape drive system to measure the radioactive beta decay of the atoms. “I implanted them into a piece of tape, and this tape drive would zip them around and away from the really high-background cyclotron area, and then into a very low-background detector area,” she explained. “Then I used detectors to watch them decay.”

Receiving her doctorate in 2012, Broussard accepted a Seaborg Fellowship at Los Alamos National Laboratory. One of her experiments there probed ultra-cold neutrons. “They are so low-energy that they’re sensitive to the strong force,” Broussard said. “They can reflect off of walls from any angle. You can even bottle them.” She wanted to control the depth to which low-energy neutrons could penetrate materials that are sustaining nuclear fission chain reactions. “For the first time, we were able to control where in the material the fission is occurring,” she said. “That has interesting implications for stockpile stewardship and nuclear material aging.”

For another LANL experiment, which sought asymmetry in the way neutrinos are emitted during neutron decay, Broussard became the detector expert. “I really liked that kind of work,” she said. But to continue advancing the field, she would need more neutrons.

“If you want neutrons, you come to Oak Ridge,” Broussard said. In 2016, that is exactly what she did, accepting a Wigner Fellowship at ORNL, home of the Spallation Neutron Source, a DOE Office of Science User Facility that is the world’s most powerful pulsed-neutron source.

Away from work, Broussard spends time with her fiancé, who is a physics professor, and enjoys hiking, festivals, board games and fantasy football. At ORNL, she conducts three experiments aimed at solving physics puzzles.

Her first experiment uses carefully characterized detectors to study neutron decay, in which a neutron transforms into a proton, with the emission of an electron and an antineutrino. The detectors measure the frequencies, directions, and energies of electron and proton emissions.

“Because we have the Standard Model of particle physics, we can predict very precisely what we expect to happen,” Broussard said. “We have a great test of how well we understand the laws of nature. The neutron is the simplest type of [particle] that can undergo radioactive beta decay. That makes it a great system to use to understand this process with excellent sensitivity.”

Broussard’s second experiment aims to solve an enigma about the lifetime of a neutron. To measure neutrons decaying into protons, scientists can either collect a bunch of neutrons and measure how long they survive or watch a beam of neutrons and count how many decay particles come out in a certain time period.

“Those rates don’t agree,” said Broussard, who is exploring the possibility that the neutron oscillates to turn into a dark matter particle. To look for the signature of this phenomenon, her experiment uses the GP-SANS instrument at the High Flux Isotope Reactor, another DOE Office of Science User Facility at ORNL, which meets exacting requirements for this kind of search.

After the neutron decay and dark matter experiments conclude, Broussard will begin a decade-long experiment to find a neutron’s electric dipole moment. “The neutron is neutral, but it’s made up of quarks, which have electric charges,” she explained. “Asymmetry in how the charges are distributed could be related to why the universe is made of matter and not antimatter.”

Improved understanding of those aspects, Broussard said, will get physicists closer to a “Theory of Everything.”

UT-Battelle manages ORNL for DOE’s Office of Science. The single largest supporter of basic research in the physical sciences in the United States, the Office of Science is working to address some of the most pressing challenges of our time. For more information, please visit www.science.energy.gov. –by Dawn Levy 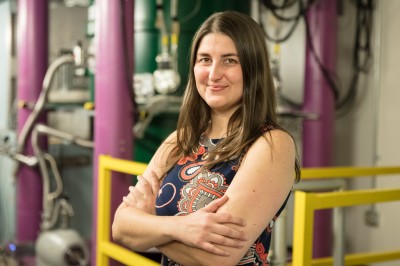 Caption: Leah Broussard leads a study of neutron decay to understand correlations between electrons and antineutrinos as well as subtle distortions in the electron energy spectrum. The physicist, who hails from Louisiana, influenced the color scheme of the experiment’s newly installed instrument to reflect her home state’s biggest celebration—its spectrometer sports Mardi Gras green on the magnet, purple on the shielding, and gold inside the magnet and on safety bars. 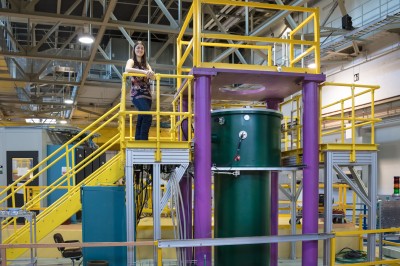 Caption: Broussard will use the approximately 23-foot-tall Nab spectrometer (green) to perform some of the most precise measurements in neutron beta decay yet.