Learning About the Future From the Distant Past

Clumps and filaments of dark matter (black areas) serve as the scaffolding for the formation of cosmic structures made of regular matter (bright areas), including stars, galaxies and galaxy clusters. 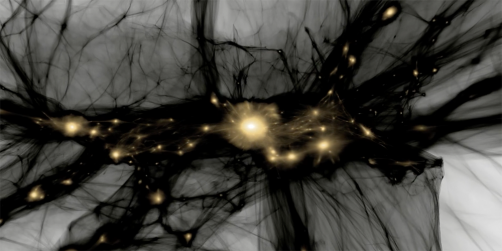 Scientists work at SLAC and Stanford are combining experimental data and theory to understand how the universe formed and what its future holds. Here, clumps and filaments of dark matter (black areas) serve as the scaffolding for the formation of cosmic structures made of regular matter (bright areas), including stars, galaxies and galaxy clusters. 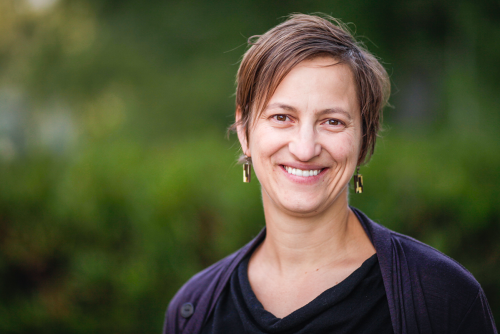 Risa Wechsler looks deep into space to explore how dark energy shaped the growth and distribution of galaxies.

Newswise — Our universe came to life nearly 14 billion years ago in the Big Bang — a tremendously energetic fireball from which the cosmos has been expanding ever since. Today, space is filled with hundreds of billions of galaxies, including our solar system's own galactic home, the Milky Way. But how exactly did the infant universe develop into its current state, and what does it tell us about our future?

These are the fundamental questions "astrophysical archeologists" like Risa Wechsler want to answer. At the Kavli Institute for Particle Astrophysics and Cosmology (KIPAC) of Stanford and the Department of Energy's SLAC National Accelerator Laboratory, her team combines experimental data with theory in computer simulations that dig deeply into cosmic history and trace back how matter particles clumped together to form larger and larger structures in the expanding universe.

"Most of our calculations are done at KIPAC, and computing is a crucial aspect of the collaboration between SLAC and Stanford," says Wechsler, who is an associate professor of physics and of particle physics and astrophysics.

Wechsler's simulated journeys through spacetime use a variety of experimental data, including observations by the Dark Energy Survey (DES), which recently discovered a new set of ultra-faint companion galaxies of our Milky Way that are rich in what is known as dark matter. The gravitational pull from this invisible form of matter affects regular matter, which plays a crucial role in the formation and growth of galaxies.

Dark energy is another key ingredient shaping the universe: It inflates the universe like a balloon at an ever-increasing rate, but researchers don't know much about what causes the acceleration.

Two future projects will give Wechsler and other researchers new clues about the mysterious energy. The Dark Energy Spectroscopic Instrument (DESI), whose science collaboration she is leading, will begin in 2018 to turn two-dimensional images of surveys like DES into a three-dimensional map of the universe. The Large Synoptic Survey Telescope (LSST), whose ultrasensitive 3,200-megapixel digital eye is being assembled at SLAC, will start a few years later to explore space more deeply than any telescope before.

"Looking at faraway galaxies means looking into the past and allows us to measure how the growth and distribution of galaxies were affected by dark energy at different points in time," Wechsler says. "Over the past 10 years, we've made a lot of progress in refining our cosmological model, which describes many of the properties of today's universe very well. Yet, if future data caused this model to break down, it would completely change our view of the universe."

The current model suggests that the universe is fated to expand forever, turning into a darker and darker cosmos faster and faster, with galaxies growing farther and farther apart. But is this acceleration a constant or changing property of spacetime? Or could it possibly be a breakdown of our theory of gravity on the largest scales? More data will help researchers find an answer to these fundamental questions. 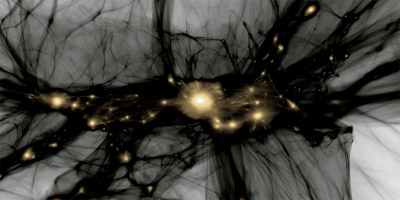 Caption: Scientists work at SLAC and Stanford are combining experimental data and theory to understand how the universe formed and what its future holds. Here, clumps and filaments of dark matter (black areas) serve as the scaffolding for the formation of cosmic structures made of regular matter (bright areas), including stars, galaxies and galaxy clusters. 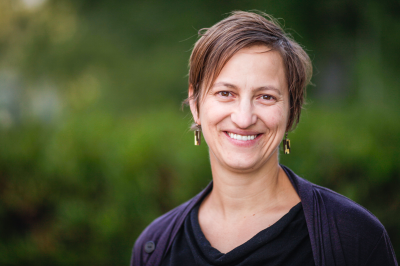 Caption: Risa Wechsler looks deep into space to explore how dark energy shaped the growth and distribution of galaxies.