Let It Snow! Solar Panels Can Take It 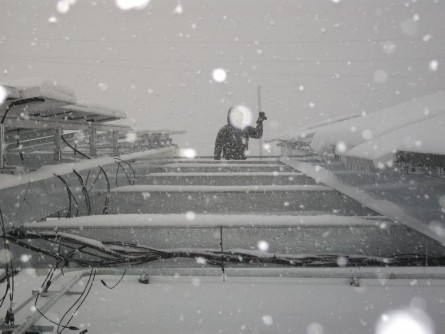 Newswise — Snow and solar cells aren't mutually exclusive, according to a Michigan Technological University scientist. Photovoltaic panels can be well worth the investment even if you live in a winter wonderland.

True, a layer of snow can cause a solar-cell blackout for awhile. But not many locales enjoy heavy snow for more than a few months. And even in the bleak midwinter, panels don't usually stay snow-covered for long.

With researchers from St. Lawrence College and Queen's University, in Kingston, Ontario, and a team of 20 industry partners, Pearce studied the effect of snow on the Open Solar Outdoors Test Field. They created a computer model to predict how much power generation would decline in various amounts of snow cover and on different types of solar modules mounted at different angles, from flat to steeply pitched. Then they validated their model with data from many of Ontario's huge commercial solar farms.

"In most cases power losses are minimal, even in snowy Canada," Pearce said. However, the group has developed a model that can be used to design the most efficient photovoltaic systems, no matter how much snow is in the area. Pearce and R. W. Andrews have authored paper based on a preliminary study, “Prediction of Energy Effects on Photovoltaic Systems Due to Snowfall Events," published in proceedings of the 2012 38th IEEE Photovoltaic Specialists Conference. pp. 003386-003391. The paper is freely available at www.academia.edu/1991659/Prediction_of_Energy_Effects_on_Photovoltaic_Systems_due_to_Snowfall_Events